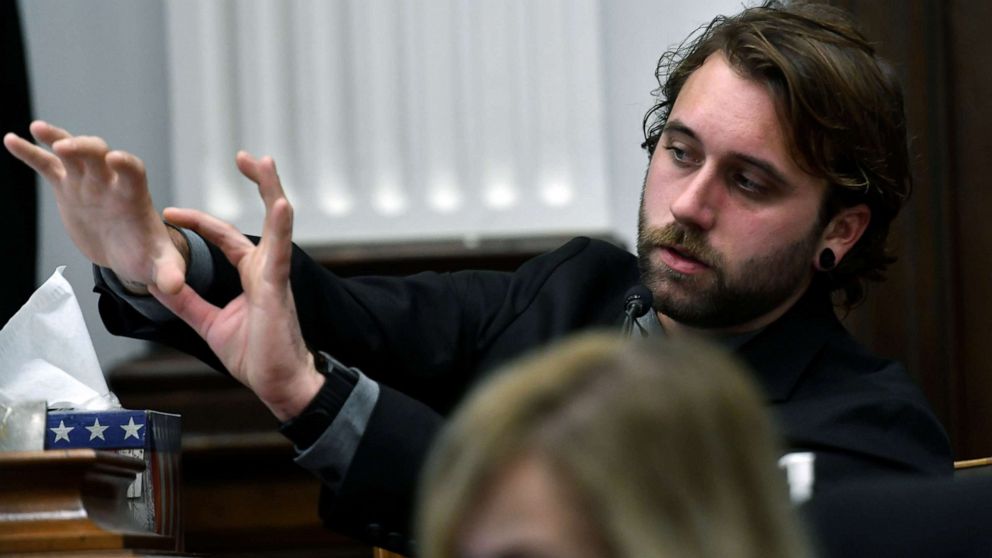 A man who was allegedly shot in the arm by Kyle Rittenhouse during a deadly Wisconsin protest testified on Monday that he thought he was going to die as he faced the barrel of a semiautomatic rifle and saw the teenager “re-racking” the weapon.

Gaige Grosskreutz, 27, took the witness stand for the prosecution in the double homicide trial and testified that as a trained emergency medical technician and working paramedic, he went to Kenosha, Wisconsin, on Aug. 25, 2020, to provide medical aid to people who were injured during the protest as he had done at 75 demonstrations that summer.

Grosskreutz testified that as a legal observer for the American Civil Liberties Union, he was also recording the protest in Kenosha in that capacity for a Facebook Live broadcast.

A resident of Milwaukee, Grosskreutz testified that in addition to bringing his medical supplies to the protest, he brought his Glock-27 handgun despite having an expired concealed weapon permit.

He said he had treated several people for minor injuries at the demonstration, which began after a Kenosha police officer shot and paralyzed Jacob Blake, a 29-year-old Black man, during a domestic incident. He said one of the protesters he treated had been shot in the arm with a rubber bullet he assumed was fired by the police.

Just before midnight, Grosskreutz testified that he was recording a live stream when he heard gunshots coming from the south of where he was and then saw Rittenhouse running in his direction being chased by people.

Grosskreutz’s video was played for the jury and he said he took it while running alongside the armed Rittenhouse and asking him, “Hey, what are you doing. You shot somebody?”

Rittenhouse continued to run while answering, “I’m going to get the police,” according to the video.

Grosskreutz said he briefly started to go back to where Rittenhouse was running from to see if he could find the person who was shot but then decided to follow Rittenhouse when people started yelling he had just shot someone.

“I thought that the defendant was an active shooter,” Grosskreutz said.

‘High likelihood I would be shot myself’

Prosecutors allege that at that point, Rittenhouse had already shot and killed Joseph Rosenbaum, 36, during an encounter at a car lot the teenager was helping to guard with other similarly armed men who answered an online call to come to Kenosha and help protect lives and property.

Grosskreutz said when he turned back to Rittenhouse’s direction, he saw Anthony Huber, 26, who video showed hitting Rittenhouse in the head with a skateboard, being fatally shot by the then-17-year-old gunman, who had been knocked to the ground and had also fired shots at an unidentified man who appeared to kick him in the face.

Video footage played for the jury by prosecutor Thomas Binger showed Grosskreutz holding his Glock handgun in his right hand and his cellphone in his left hand as he approached Rittenhouse, who was still on the ground.

Grosskreutz said that he saw Rittenhouse point his rifle at him but the gun didn’t go off. He said he then witnessed Rittenhouse “re-racking” the gun to prepare it to fire. The video showed Grosskreutz raising both hands in the air as he came within a few feet of Rittenhouse.

“I was very close to the defendant and I thought there was a high likelihood I would be shot myself,” Grosskreutz said. “By re-racking the weapon, I inferred that the defendant wasn’t accepting my surrender.”

‘I was never trying to kill the defendant’

Grosskreutz said that such a lethal response would have gone against the medical ethics ingrained in his mind and tattooed on his arm to “Do no harm.”

He said he was attempting to use a “non-lethal way to end that interaction” when, according to the video, he lowered his arms and moved toward Rittenhouse, who shot him in the right bicep.

Binger showed graphic photos of the gaping wound in Grosskreutz’s arm, an injury that has caused Grosskreutz to undergo multiple surgeries and physical therapy to recover from. The witness said he still has no feeling in his right arm from the elbow to his thumb.

During cross-examination from Rittenhouse’s attorney Corey Chirafisi, Grosskreutz said that he initially told investigators that he lost his gun that night before he was shot and the fact that he was armed was not mentioned in a $10 million lawsuit he filed against the city and county of Kenosha over the shooting.

“The way this case turns out has an impact on your ability to collect your $10 million, right?” Chirafisi asked.

Grosskreutz responded, “That is correct.”

“When you were standing 3 to 5 feet from him with your arms up in the air, he never fired, right?” Chirafisi asked Grosskreutz, referring to Rittenhouse.

“It wasn’t until you pointed your gun at him, advanced on him, with your gun, now your hands down pointed at him, that he fired, right?” Chirafisi asked.