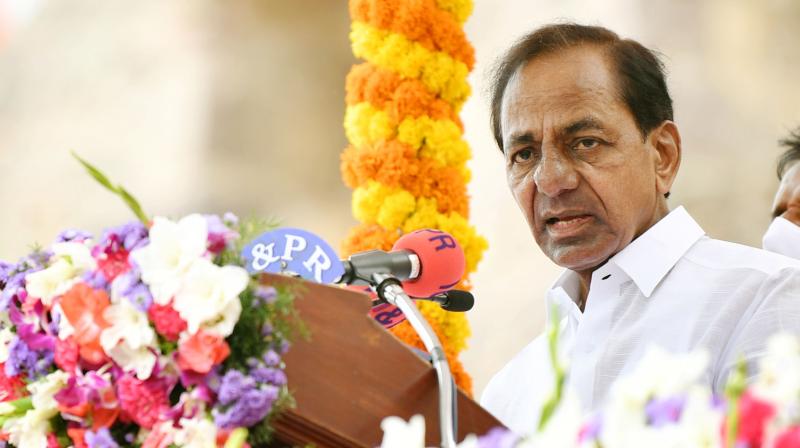 HYDERABAD: Chief Minister K. Chandrashekar Rao on Monday dared BJP Telangana unit president Bandi Sanjay Kumar to prove his claims that the Centre was contributing funds to the Telangana Rashtra Samiti (TRS) government's sheep distribution programme in the state. He offered to resign from his post on the spot if Sanjay proved his claims.

Addressing a press conference here, the Chief Minister asked if that was so, why the sheep distribution programme was not being implemented in any of the over 20 BJP-ruled states.

"The sheep distribution programme is completely funded by the Telangana government. The Centre contributes nothing for this. We secure loans from a Central agency to mobilise funds and we repay it with interest. This is the fact. If Bandi Sanjay has guts, he should prove me wrong on this. I am ready to resign on the spot," the Chief Minister challenged.

He also lashed out at Sanjay Kumar for his frequent statements that he would invade his farmhouse and plough his farm with thousands of Telangana farmers. The Chief Minister asked Sanjay whether he was a tractor driver to plough his farm. He dared Sanjay to come to his farmhouse and plough the land and see for himself what would happen and warned that he would be torn into six pieces.

"It's not a farmhouse. It's a farmer's house. I bought it legally with my hard earned money. I go there frequently because it's in my Gajwel constituency. I love farming and I do farming there. What's wrong with it? If you have guts, come to my farmhouse and plough the land and see what happens? You will be torn into six pieces." Rao warned.

Rao also expressed anger at the Opposition leaders and others branding him as a 'drunkard'. "Some fools always say I am a drunkard. Did anyone see me consuming alcohol? Did anyone add soda into my glass when I was drinking alcohol? What nonsense are they talking about? Is this the way to talk about someone? Is this the manners they have learnt from teachers?" he asked.