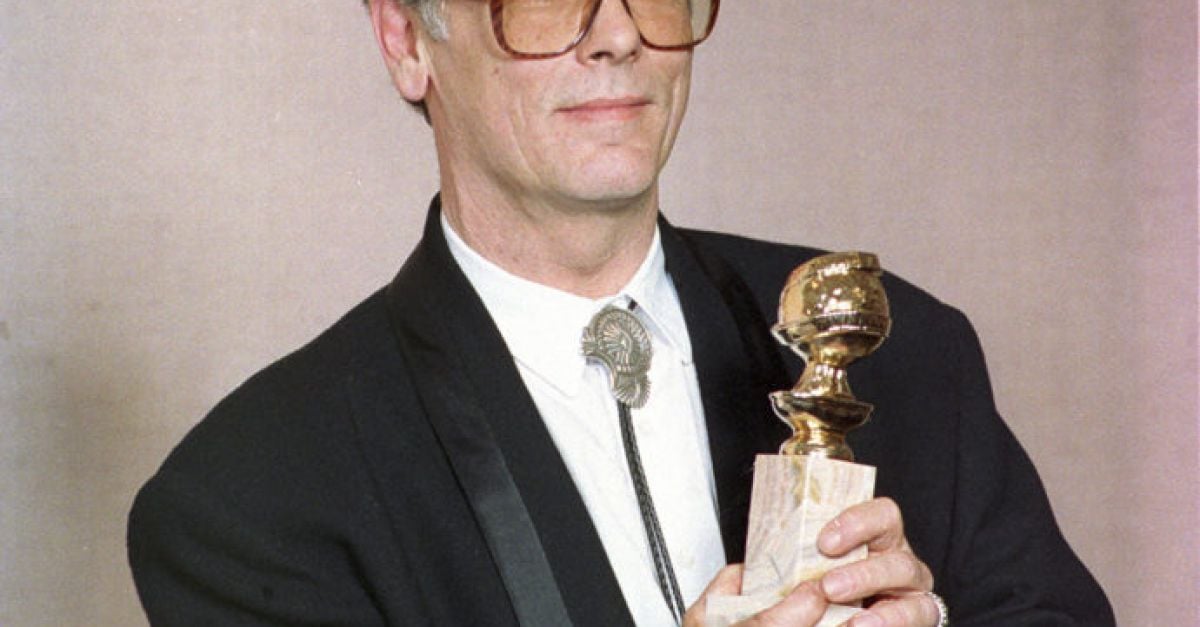 Dean Stockwell, a top Hollywood child actor who gained new success in middle age in the sci-fi series Quantum Leap and in a string of indelible performances in film, including David Lynch’s Blue Velvet, Wim Wenders’ Paris, Texas and Jonathan Demme’s Married To The Mob, has died aged 85.

Stockwell was Oscar-nominated for his comic mafia kingpin in Married To The Mob and was four times an Emmy-nominee for Quantum Leap.

But in a career that spanned seven decades, Stockwell was a supreme character actor whose performances, lip-syncing Roy Orbison in a nightmarish party scene in Blue Velvet, a desperate agent in Robert Altman’s The Player, Howard Hughes in Francis Ford Coppola’s Tucker: The Man And His Dream — did not have to be lengthy to be mesmerizing.

The dark-haired Stockwell was a Hollywood veteran by the time he reached his teens.

In his 20s, he starred on Broadway as a young killer in the play Compulsion and in prestigious films such as Sons And Lovers.

He was awarded best actor at the Cannes Film Festival twice, in 1959 for the big-screen version of Compulsion and in 1962 for Sidney Lumet’s adaptation of Eugene O’Neill’s Long Day’s Journey Into Night.

While his career had some lean times, he reached his full stride in the 1980s.

“My way of working is still the same as it was in the beginning — totally intuitive and instinctive,” he told The New York Times in 1987.

“But as you live your life, you compile so many millions of experiences and bits of information that you become a richer vessel as a person.

“You draw on more experience.”

His Oscar-nominated role as Tony “The Tiger” Russo, a flamboyant gangster, in the 1988 hit Married To The Mob led to his most notable TV role the following year, in NBC’s science fiction series Quantum Leap.

Both roles had strong comic elements.

“If people hadn’t seen me in Married To the Mob they wouldn’t have realised I could do comedy.”

Starring with Stockwell in Quantum Leap was Scott Bakula, playing a scientist who assumes different identities in different eras after a time-travel experiment goes awry.

As his colleague, The Observer, Stockwell lends his help but is seen only on a holographic computer image.

He continued playing roles, big and small, in films and TV, into the 21st century, including a regular role in another science fiction series, Battlestar Galactica.

Stockwell became an actor at an early age.

His father, Harry Stockwell, voiced the role of Prince Charming in Disney’s Snow White And The Seven Dwarfs and appeared in several Broadway musicals.

Aged seven, Dean made his show business debut in the 1943 Broadway show The Innocent Voyage, the story of orphaned children entangled with pirates.

His older brother, Guy, also was in the cast.

A producer at MGM was impressed by Dean and persuaded the studio to sign him.

His first significant role was as Kathryn Grayson’s nephew in the 1945 musical Anchors Away, which starred Gene Kelly and Frank Sinatra.

In the next few years, Stockwell appeared in such films as the Oscar-winning antisemitism drama Gentlemen’s Agreement, with Gregory Peck, as well as Song Of The Thin Man, the last of the William Powell-Myrna Loy mystery series, with Stockwell playing their son.

He had the title roles in the 1948 anti-war film The Boy With Green Hair, about a war orphan whose hair changes colour, and Kim, the 1950 version of the Rudyard Kipling tale, which starred Errol Flynn.

Films in his youth also included Down To The Sea In Ships, with Lionel Barrymore; The Secret Garden, with Margaret O’Brien; and Stars In My Crown with Joel McCrea.

“I was very lucky to have a loving and caring and sympathetic mother and not a stage mother,” he said in 1989.

Still, he stressed, it wasn’t always easy, and he dropped out of the business when he reached 16.

“I never really wanted to be an actor,” he said.

“I found acting very difficult from the beginning.

It was not the only time he dropped out.

But, he said, “I came back each time because I had no other training”.

Reviving his career after five years, Stockwell returned to New York where he co-starred with Roddy McDowall on Broadway in Compulsion, a 1957 drama based on the notorious Leopold-Loeb murder case in which two college students killed a 14-year-old boy for the thrill of it.

He was the struggling son in D.H. Lawrence’s Sons And Lovers, an Oscar nominee for best picture, and the sensitive younger brother in Long Day’s Journey Into Night with Ralph Richardson and Katharine Hepburn.

He also tried his hand at theatre directing, putting on a well-received program of Beckett and Ionesco plays in Los Angeles in 1961.

In 1960, Stockwell married Millie Perkins, best known for her starring turn as Anne in the 1959 film The Diary Of Anne Frank.

The marriage ended in divorce after only two years.

In the mid-60s, Stockwell dropped out of Hollywood and became a regular presence at the hippie enclave of Topanga Canyon.

After the encouragement of Dennis Hopper, Stockwell wrote a screenplay that never got produced but inspired Neil Young’s 1970 album After The Gold Rush, which took its name from Stockwell’s script.

In 1981 he married Joy Marchenko, a textile expert.

When his career hit a down period, Stockwell decided to take his family to New Mexico.

As soon as he left Hollywood, filmmakers started calling again.

He was cast as Harry Dean Stanton’s drifting brother in Wim Wenders’ acclaimed 1984 film Paris, Texas and that same year as the evil Dr Yueh in Lynch’s Dune.

He called his success from the 1980s onward his “third career”.

As for the Oscar nomination, he said in 1989 that it was “something I’ve dreamed about for years. … It’s just one of the best feelings I’ve ever had”.

Like his longtime friend Hopper, a noted photographer as well as an actor, Stockwell was active in the visual arts.

He made photo collages and what he called “diceworks”, sculptures made of dice.

He often used his full name, Robert Dean Stockwell, in his art projects.

Stockwell is survived by his wife, Joy, and their two children, Austin Stockwell and Sophie Stockwell.