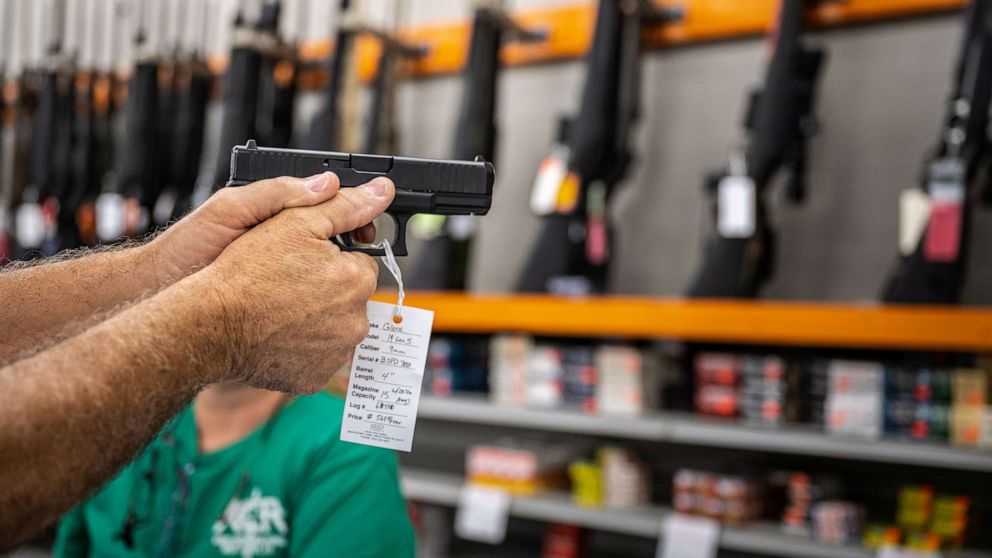 While taxing guns or ammunition may not prevent malicious actors from accessing them, some policymakers and advocates say this approach could raise revenue to fund lifesaving violence prevention programs and help offset the the $280 billion annual price tag of gun violence in America.

Yet resistance to raising taxes is as embedded in the fabric of American society as the right to bear arms, with both sentiments rooted in the nation’s founding. While a federal gun tax has been in place for decades, some link these unique political and societal factors in the U.S. — as well as an aggressive industry lobby — to the struggles new tax proposals have faced at the state and local level.

After a year that saw a record-high 21 million gun sales (revealed by data on background checks) and record-high gun deaths (34,274 in 2021 alone, per Gun Violence Archive data), some are revisiting how a tax scheme could be used to mitigate the carnage seen in places such as schools, grocery stores and homes.

Here is how advocates argue that a tax could be used as one policy lever in a holistic approach to ameliorating gun violence — not with the goal of keeping people from buying guns, but rather to claw back revenue from industry profits to raise billions for American communities.

Check back tomorrow, when we look into whether therapy is effective to end the cycle of gun violence.

California proposal could ‘be a model for the nation’

A particularly bloody summer in California this year led lawmakers to propose a tax on guns and ammo to generate revenue specifically to fund community-based prevention programs. AB1223, which would have added an excise tax of 10% on handgun sales and 11% on long guns, precursor parts and ammunition, fell four votes short of advancing by super majority in the state Assembly last summer, but it’s set to be re-introduced in January.

“This tax is for funding gun violence prevention programs,” California Assembly ember Marc Levine, a Democrat who helped draft the proposed legislation, told ABC News. “It’s something everyone can agree on.”

Levine told ABC News that California lawmakers are weighing a lot as they consider the bill, especially as redistricting could remap the areas they represent, saying, “Will their district become more conservative, more anti-tax, more pro-gun? Or will they become more concerned about safety and ending gun violence?”

Republican opponents of the bill have argued it’s unconstitutional.

“It is a clear violation of the First Amendment,” Sam Paredes, executive director of Gun Owners of California, told ABC News. “It is unconstitutional to require an excise tax, insurance, any monetary requirement before someone exercises an enumerated constitutional right.”

Ari Freilich, the state policy director at the Giffords Law Center to Prevent Gun Violence, noted that a federal tax on guns and ammo has been in place for decades: a 10% tax on the sale of pistols and revolvers and an 11% tax on other firearms and ammunition. The revenue raised is mainly used to fund wildlife conservation efforts and education programs for hunters, according to Freilich.

“Reasonable folks can disagree,” Freilich told ABC News, discussing the viability of a gun tax, “but the courts have been pretty clear, and there’s been the federal law in place — really an analogous tax at the federal level — for over a century.”

Freilich said the proposal in California is “intentionally analogous to the federal tax,” with the goal of helping “remediate the effects that the same products have on human populations and families, as well as wildlife.”

Some $1 billion was generated in excise taxes on hunting, shooting and other outdoor sports equipment in 2019, according to the Department of the Interior.

Similar initiatives to tax guns or ammo have been made at the local level in Seattle and in Cook County, Illinois, and both have faced rocky rollouts and strong resistance from the gun industry.

In Seattle, a measure requiring retailers to pay a $25 tax on each firearm sold and a few cents per round of ammunition was passed by city lawmakers in 2015, with the proceeds to be used for gun violence-related programs. It’s been challenged, but the Washington Supreme Court has rejected the most recent case against overturning it.

An analysis from the nation’s firearm industry trade association has slammed Seattle’s tax , saying that just $85,352 was generated in 2019, far short of an initial annual projection of $500,000.

In Cook County, which includes Chicago, a similar $25 tax on firearm sales and up to a 5-cent tax on ammunition cartridges approved in 2012 was struck down by the Illinois Supreme Court earlier this month. The Illinois high court ruled that the taxes violate the uniformity clause of the state’s constitution, which means the government must establish that the tax classification is substantially related to the object of the legislation.

“The relationship between the tax classification and the use of the tax proceeds is not sufficiently tied to the stated objective of ameliorating those costs,” Justice Mary Jane Theis wrote in her opinion. “Under the plain language of the ordinances, the revenue generated from the firearm tax is not directed to any fund or program specifically related to curbing the cost of gun violence.”

The ruling, however, could leave the door open for narrower gun violence tax approaches. While Justice Michael J. Burke agreed with the judgment, he added in an opinion: “The majority’s analysis is problematic because it leaves space for a municipality to enact a future tax — singling out guns and ammunition sales — that is more narrowly tailored to the purpose of ameliorating gun violence.”

New gun taxes, opponents have argued, also could make law-abiding buyers of guns and ammo instead seek out private sellers or underground marketplaces. Restrictions on private firearms sales vary state to state and those sales have proved difficult to track.

“Unfortunately we have very little information, very little data to work with — there have not been that many really high-quality studies trying to look at this issue,” Robert McClelland, a senior fellow in the Urban-Brookings Tax Policy Center, told ABC News. A tax like the one proposed in California “really punishes people who are high-volume users, who are going to tend to be target shooters or hunters.”

“I don’t know if those people are really the ones that are responsible for most gun violence, but that doesn’t sound likely,” he added. “So an ammunition tax seems like it’s misdirected.”

As for any potential decrease in sales resulting from a tax, according to McClelland, “People who are on the borderline between making a purchase and not making a purchase, to that extent, yes, you would see fewer purchases. I would expect a much larger effect to be people would would simply go to private sales for used handguns and used firearms.”

Research compiled by Rosanna Smart, an economist at the RAND Corporation, found that some 40% of inmate respondents among adult male detainees in Cook County Jail in Chicago acquired firearms through means other than purchase or trade.

Opponents of the measure in Seattle said all it did was cost the city existing sales tax revenue.

“Outdoor Emporium moved out of Seattle after the owner saw a loss of $2 million in revenue, a 32% decline in customer traffic and was forced to lay off three employees,” a 2020 editorial posted by the National Shooting Sports Foundation, a trade association, states. “Precise Shooter, another business that was located in Seattle, shuttered their store and opened up in nearby Lynnwood.”

McClelland said shops moving across city lines probably wouldn’t be a major issue if a whole state, in this case California, passed a similar bill, but even then it’s difficult to keep guns out of the hands of those with malicious intent.

“I don’t know if people with criminal intent are more price sensitive to firearms purchases than other people — I don’t know why they would be,” he said.

Smart’s research for RAND has found there’s little evidence on whether taxation affects gun violence, which is due, at least in part, to the fact it’s been tried so infrequently.

According to RAND: “Overall, researchers currently have little empirical evidence indicating how taxation would influence firearm-related outcomes, such as violent crime or suicides, or establishing how taxing firearms or ammunition would affect firearm prices, the supply of firearms, or defensive gun use.”

‘Not looking to punish’

Those pushing for taxes on guns and bullets, Freilich said, need to keep their focus on explaining how the new revenue could prevent future violence.

It’s very important that proposals, like the one in California, aren’t perceived as punitive, advocates say, and that even if they pass, additional solutions still will be required.

“I think something that is important is that the tax be a reasonable, modest tax on a profitable industry that has just had a year of record sales at a time of record spikes in gun violence,” Freilich said. “We’re essentially not looking to punish anyone to deter anyone from purchasing weapons, but asking a very profitable industry to pay a modest surtax on their profits to help fund the work that is effective at preventing the enormous harms caused by their products.”

If a federal tax on guns and ammo can be used to protect wildlife, he continued, “I think it’s very appropriate that we’ve got an analogous law, at the state or federal level, to generate revenue to save human beings as well.”

Levine, who said he plans to bring the bill back to the floor in early 2022, said he hopes that if his proposal passes in California it can serve as an example for other jurisdictions throughout the U.S.

“We need to have courage. We can save lives and reduce gun violence in California,” Levine said. “We need to be a model for the nation.”