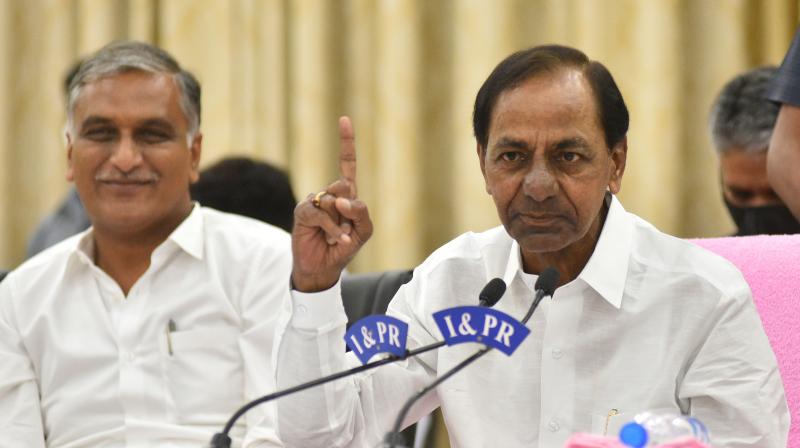 Hyderabad: ‘My name is KCR and I am not a traitor’; this, in essence, was the crux of the encore of a press conference of Chief Minister K. Chandrashekar Rao addressed on Monday at Pragati Bhavan late afternoon.

This was a third press conference that held the attention of people of Telangana within 24 hours and a response to the response by BJP chief Bandi Sanjay to the battleline drawing presser of Chief Minister Rao.

In what seemed to be an emotional outburst, Chandrashekar Rao, responded with incredulity at the statements of state BJP leaders terming him a ‘traitor’ for his remarks at Sunday’s press conference about Chinese entering into India’s borders at Arunachal Pradesh and thrashing the Indian soldiers.

In a rare sequel, Rao, addressing a second presser in two days, choose to focus all his verbal fire to attack Telangana BJP leaders, besides also continuing his onslaught against the Narendra Modi-led government at the Centre.

Rao said he plans to conduct a press conference everyday henceforth, until the BJP gives clarity on his two main demands – namely procurement of paddy from Telangana and withdrawal of cess on fuel.

“It has become a practice for BJP leaders to label anyone as a traitor who raises their voice against their flawed policies and against their undemocratic style of functioning. Since I strongly questioned them about paddy procurement and fuel cess, they are now targeting me and branding me as a traitor. They say I supported China by talking about Chinese invasion of our borders in Arunachal Pradesh. What wrong did I commit? I only questioned the Modi government to protect our borders and sovereignty. I told them they can't sit quietly while China invades our borders. Chinese aggression in Arunachal Pradesh is being widely reported by the media. I talked about it. Who is a traitor? Is it those who alerted the government to stop Chinese invasion or is it those who are sitting silently as a foreigner is invading our country?” Rao said.

Rao reiterated that the BJP’s style of functioning is not just to label someone as traitors who question them but also to harass them with income tax (IT), enforcement directorate (ED) and the Central Bureau of Investigations (CBI) raids and cases.

Referring to Bandi Sanjay’s comments that they will send him to jail soon, CM Rao said, “BJP leaders are trying to threaten me with I-T, ED and CBI raids and cases. Only thieves will fear I-T, ED, CBI etc. I am not a thief. Whatever I do, I do legally. I have not accumulated any ill-gotten wealth. I file IT returns and pay taxes promptly. I dare them to order raids on me or anything. I am ready to face any inquiry.”

Rao came down heavily on BJP state leaders for failing to answer questions raised by him the day before. “Will the BJP government at the Centre purchase paddy from Telangana or not? Will it withdraw cess on fuel or not? Instead of answering, he indulged in personal attacks and talked nonsense. But I will not leave him or the BJP.”

Rao said he was ready to resign as Chief Minister if Sanjay could prove that the Modi government had contributed funds to the sheep distribution scheme.