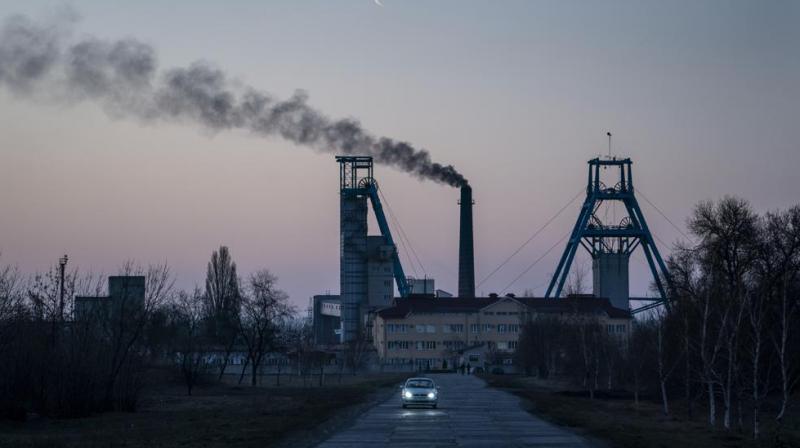 GLASGOW: The world’s top carbon polluters, China and the United States, agreed Wednesday to increase their cooperation and speed up action to rein in climate-damaging emissions, signaling a mutual effort on global warming at a time of tension over their other disputes.

In back-to-back news conferences at U.N. climate talks in Glasgow, Chinese climate envoy Xie Zhenhua and U.S. counterpart John Kerry said the two countries would work together to accelerate the emissions reductions required to meet the goals of the 2015 Paris Agreement on climate change.

“It’s beneficial not only to our two countries but the world as a whole that two major powers in the world, China and the U.S., shoulder special international responsibilities and obligations,” Xie told reporters. “We need to think big and be responsible.”

“The steps we’re taking … can answer questions people have about the pace at which China is going, and help China and us to be able to accelerate our efforts,” Kerry said.

China also agreed for the first time to crack down on methane leaks, following the lead of the Biden administration’s efforts to curb the potent greenhouse gas. Beijing and Washington agreed to share technology to reduce emissions.

Both sides recognize that there is a gap between efforts taken globally to reduce climate pollution and the goals of the Paris deal, Xie said.

“So we will jointly strengthen climate action and cooperation with respect to our respective national situations,” he said.

A U.S.-China bilateral agreement in 2014 gave a huge push to the creation of the historic Paris accord the following year, but that cooperation stopped with the Trump administration, which pulled the U.S. out of the pact. The Biden administration brought the U.S. back in to that deal, but has clashed with China on other issues such as cybersecurity, human rights and Chinese territorial claims.

“While this is not a gamechanger in the way the 2014 US-China climate deal was, in many ways it’s just as much of a step forward given the geopolitical state of the relationship,” said Thom Woodroofe, an expert in U.S.-China climate talks. “It means the intense level of US-China dialogue on climate can now begin to translate into cooperation.”

The U.S. and China will also revive a working group that will “meet regularly to address the climate crisis and advance the multilateral process, focusing on enhancing concrete actions in this decade,” the declaration said.

Both Washington and Beijing intend to update the world on their new national targets for 2035 in 2025 — a move that is particularly significant for China. The declaration also said China will “make best efforts to accelerate” its plans to reduce coal consumption in the second half of this decade.

The announcement came as governments from around the world were negotiating in Glasgow about how to build on the Paris Agreement to reduce greenhouse gas emissions and protect vulnerable countries from the impacts of global warming.

Some experts noted the deal was short on commitments that would significantly reduce heat-trapping gases.

“It’s a good sign that the world’s two biggest emitters can actually work together to face the biggest crisis of humanity but there’s not a lot of meat there after the methane stuff,” said Byford Tsang a China policy analyst for the European think tank E3G.

Earlier Wednesday, a draft of a larger deal being negotiated by almost 200 countries in Glasgow called for accelerating the phasing out of coal — the single biggest source of man-made emissions — although it set no timeline.

Setting deadlines for phasing out fossil fuels is highly sensitive to countries that still depend on them for economic growth, including China and India, and to major exporters of coal such as Australia. The future of coal is also a hot-button issue in the U.S., where a spat among Democrats has held up one of President Joe Biden’s signature climate bills.

Greenpeace International director Jennifer Morgan, a long-time climate talks observer, said that the call in the draft to phase out coal would be a first in a U.N. climate deal, but the lack of a timeline would limit the pledge’s effectiveness.

“This isn’t the plan to solve the climate emergency. This won’t give the kids on the streets the confidence that they’ll need,” Morgan said.

The draft also expresses “alarm and concern” about how much Earth has already warmed and urges countries to cut carbon dioxide emissions by about half by 2030. Pledges so far from governments don’t add up to that frequently stated goal.

The draft is likely to change, but it doesn’t yet include full agreements on the three major goals that the U.N. set going into the negotiations: for rich nations to give poorer ones $100 billion a year in climate aid, to ensure that half of that money goes to adapting to worsening global warming, and the pledge to slash global carbon emissions by 2030.

It acknowledges “with regret” that rich nations have failed to live up to the climate finance pledge. Currently they are providing around $80 billion a year, which poorer nations that need financial help both in developing green energy systems and adapting to the worst of climate change say isn’t enough.

Papua New Guinea Environment Minister Wera Mori said that given the lack of financial aid his country may “rethink” efforts to cut logging, coal mining and even coming to the U.N. talks.

The draft says the world should try to achieve “net-zero (emissions) around mid-century,” a target that was endorsed by leaders of the Group of 20 biggest economies in a summit just before the Glasgow talks. That means requiring countries to pump only as much greenhouse gas into the atmosphere as can be absorbed again through natural or artificial means.

In a nod to one of the big issues for poorer countries, the draft vaguely “urges” developed nations to compensate developing countries for “loss and damage,” a phrase that some rich nations don’t like. But there are no concrete financial commitments.

“My big, big ask of all of you is to please come armed with the currency of compromise,” he told negotiators. “What we agree in Glasgow will set the future for our children and grandchildren, and I know that we will not want to fail them.”