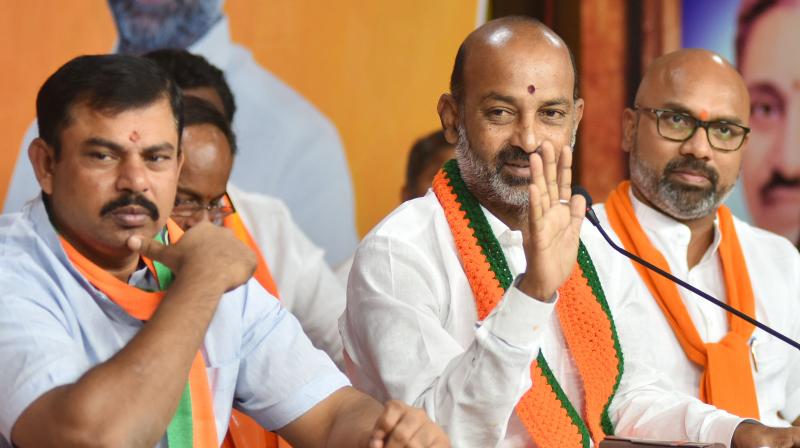 Addressing a press conference here on Monday along with Nizamabad MP Dharmapuri Aravind and other leaders, Sanjay alleged that the Chief Minister had insulted and demoralised the soldiers of the Indian Army, who are sacrificing their lives to protect the sovereignty of the country,  with his anti-national comments.

“KCR should be within his limits while commenting on issues pertaining to national security and sovereignty. He should not forget that he is holding a constitutional post. How can he say that Indian soldiers are getting beaten black and blue by Chinese soldiers at Indian borders in Arunachal Pradesh. Does that not amount to supporting China? Is it not insulting Indian soldiers who are putting their lives at stake under extreme climatic conditions?" asked Sanjay.

He also strongly refuted the Chief Minister’s allegations that the Centre had refused to procure paddy from the state.

"The Centre only said that it will not procure parboiled rice from Telangana. But KCR is misleading farmers in Telangana by stating that the Centre has completely stopped paddy procurement from Telangana. The Centre purchases raw rice even from Punjab for minimum support price. But the TRS government encourages parboil rice production. There is a big scam of the TRS behind parboiled rice. The ruling party leaders have colluded with rice millers for recycling ration rice and they use parboiled rice for this scam,” Sanjay alleged.

He also condemned Rao's charges that the Centre's farm laws mandate abolition of agriculture market committees. “The farm laws allow farmers to sell their produce in any part of the country without any restrictions for a better price.”

The state BJP president ridiculed the Chief Minister’s statement that he will organise a protest in Delhi demanding the repeal of farm laws.

"The Supreme Court has already issued stay orders on farm laws. What is he going to protest against now? KCR has a habit of issuing such statements that he will protest in Delhi on some issue or the other. But he never did so in the last seven years. He resorts to such cheap tactics only to confuse people and divert people's attention from the real issues," the state BJP president claimed.

Nizamabad MP Aravind, meanwhile, slammed Chandrashekar Rao for spreading lies about him ridiculing the SC/ST Atrocities Act and said that the Chief Minister, his son and minister K.T. Rama Rao and his daughter Kavitha.

"It's the BJP government at the Centre which made the SC/ST Atrocities Act powerful with an aim to check atrocities against SC and ST. But KCR is telling lies that I ridiculed this law. On Teenmaar Mallanna's arrest issue, I only said that the TRS government misused this Act to book false cases against him for saying 'lotta peesu'. But I never said this law is 'lotta peesu'. My comments are on record. Anyone can go through them. I have never seen blatant liars like KCR, KTR, Kavitha in my political life. One feels spit on their faces," Aravind stated.