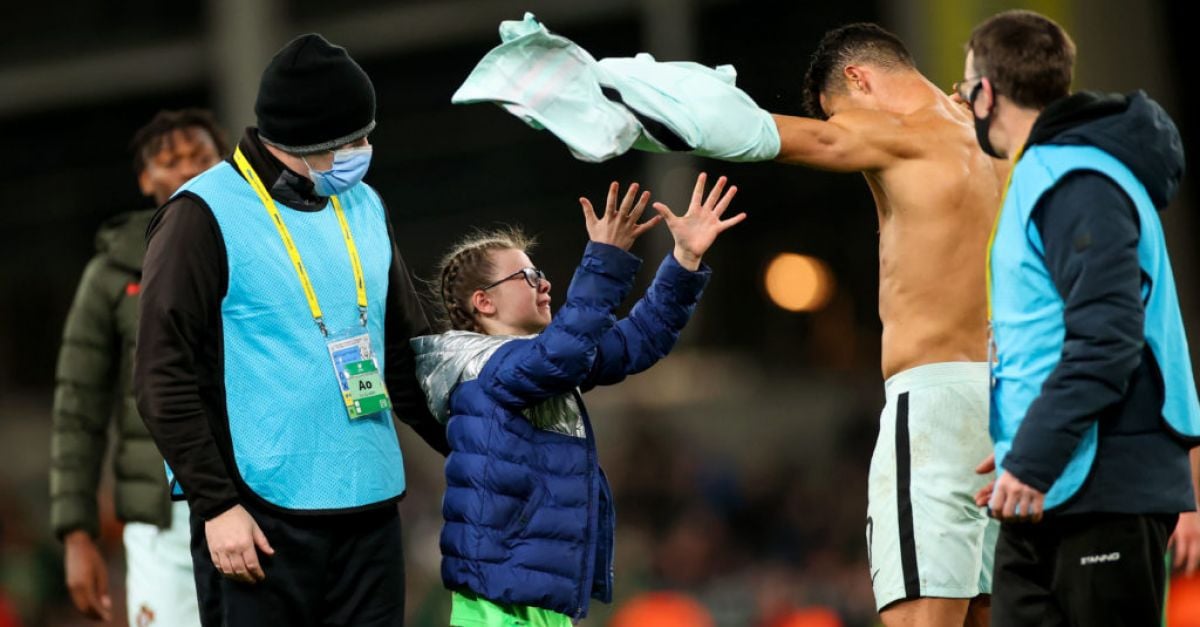 It wasn’t Cristiano Ronaldo’s evening at the Aviva Stadium as he failed to break down a resolute Republic of Ireland defence last night, but he made a special memory for a young supporter afterwards.

Ireland goalkeeper Gavin Bazunu, who made a late save from the Manchester United star in the 0-0 draw, requested a jersey swap but Ronaldo saved his shirt for a young girl who ran onto the pitch.

She looked delighted as she got a hug from her hero and his jersey before being led off the pitch by stewards.

The 11-year-old Dubliner was a guest on RTÉ’s Morning Ireland today as she revealed what she said to Ronaldo.

Addison Whelan, herself a talented player with Shelbourne’s Under-13 team, spoke about how she evaded stewards when she ran onto the pitch.

“I jumped over the barrier, I had been in the second row, then I sprinted onto the pitch.”

Even though she was chased (and caught) by security and stewards Addison managed to get close to the Portuguese and Manchester United star and began shouting his name to catch his attention.

“He turned around and saw me and told them to leave me, he came over to me.

“I was shaking and crying.” Portugal’s Cristiano Ronaldo gives his shirt to a young fan after the game.©INPHO/Laszlo Geczo

Addison had the presence of mind to tell the star that she was a great fan and asked him for his jersey which he gave her and asked her if she was OK.

When asked what she was thinking at the time, Addison replied: “oh my god, this is it, this is my chance, it’s come true.”

Addison said that the stewards “weren’t giving out. They were holding me by the arms asking me where I came from”.

The fifth class student at St Joseph’s NS admitted that she had been nervous, but she now has his shirt “it’s right beside me. I don’t want to try it on”.

Addison’s dream is to play for Arsenal and the Ireland women’s team, in the meantime she is gearing up for a game between Shelbourne and Bohemians. She expects to win. A young fan pleads with Portugal’s Cristiano Ronaldo for his jersey after the game.©INPHO/James Crombie Portugal’s Cristiano Ronaldo gives his shirt to a young fan after the game. ©INPHO/James Crombie

Stephen Kenny’s side put on a fine display against a Portugal side which included Ronaldo, Bruno Fernandes, Andre Silva and Goncalo Guedes.

Ireland need three points in their away clash against Luxembourg on Sunday to finish third in World Cup qualifying group A.

While any hopes of qualification for the 2022 World Cup are already over, Kenny has encouraged his side to finish the campaign on a high note.

He said: “From my point of view, I know there’s nothing in it in terms of it doesn’t help us in the European Championships, it doesn’t affect the seeding or anything like that, but from a personal pride point of view, apart from the 97th-minute goal that Ronaldo got, it’s nine matches with one defeat.

“We look defensively better now, we’re not giving up many chances and three clean sheets in the last three games, so of course we want to go to Luxembourg and win, of course we do.

“But tonight is about tonight and tonight, I thought, was of a very, very high standard technically for 65 minutes, maybe and a good defensive display for 90 minutes.” – Additional reporting from Vivienne Clarke