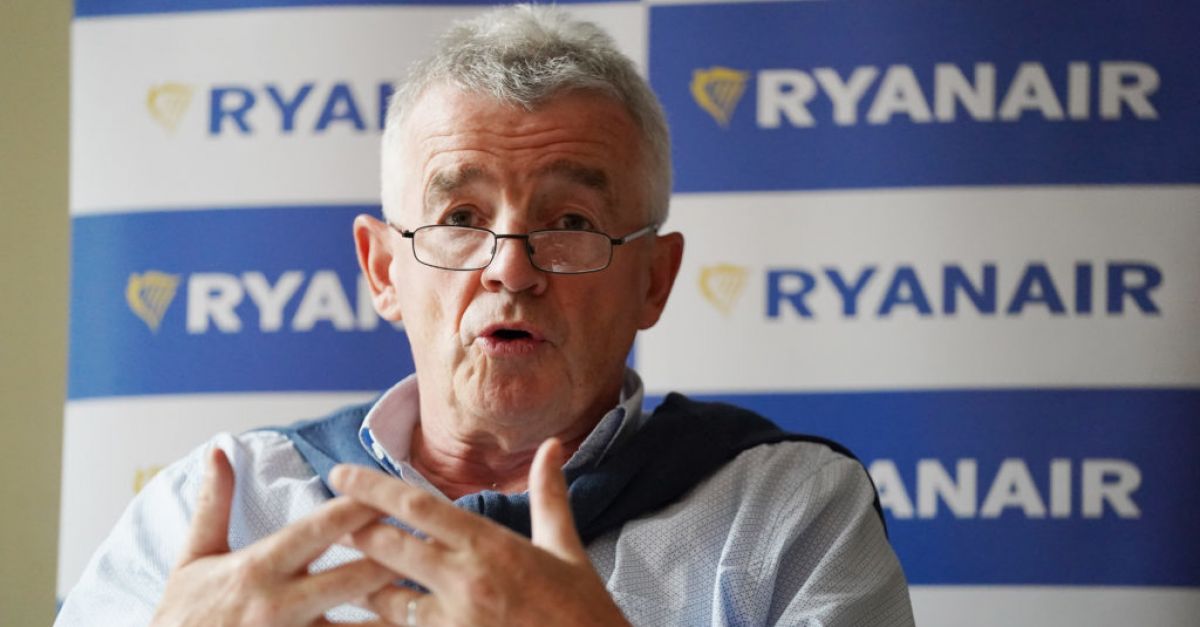 The High Court has directed that a search be made of Ryanair group chief executive Michael O’Leary’s messages as part of the airline’s action over a threatened 2019 pilots’ strike, which was called off after a court injunction was obtained.

Mr Justice Brian O’Moore also refused a Ryanair application for the divulging of all documents that the budget airline said Aer Lingus has in relation to confidential and commercially sensitive information about the threatened 48-hour industrial action in August 2019.

Ruling on a number of discovery matters on Thursday, the judge directed that a search be made for such text messages, telephone records, WhatsApp messages or other instant messages made, related to this matter, generated or maintained by Mr O’Leary.

It was not enough for Ryanair to say Mr O’Leary had minimal involvement to prevent relevant searches being made of records made, generated or maintained by Mr O’Leary, the judge said.

Ryanair relied on the fact that Mr O’Leary’s assistant is identified by Ryanair as a custodian and that any relevant electronically stored documents, meeting notes and handwritten notes made or generated by Mr O’Leary will be discovered as a result of a search of his assistant’s records.

The judge said he was not prepared to accept this was so. Ryanair did not suggest that text messages, telephone records, WhatsApp messages or other instant messages made, generated or maintained by Mr O’Leary will emerge from a search of the assistant’s records.

He, therefore, made the direction for a search to be made of Mr O’Leary’s records.

He also directed that an explanation be given on affidavit as to how it is that all electronically stored documents, meeting notes and handwritten notes of Mr O’Leary can confidently be said to be within the procurement of Mr O’Leary’s assistant, as custodian of that material.

The judge also noted there had been no affidavit from Mr O’Leary saying that he had little or no relevant involvement in the dealings with Fórsa in 2018 and 2019 – dealings which were obviously quite important as far as the airline was concerned.

One would expect that the group CEO would have such an involvement, even if he was not the main driver of or participant, in the mediation with the union in relation to the threatened industrial action, he said.

Ryanair is suing the trade union Fórsa and a number of pilots, including the president of pilots’ union Ialpa, Capt Evan Cullen, claiming it suffered millions in losses as a result of the threatened 48-hour industrial action in August 2019.

The defendants deny the claims.

The ruling followed applications by both sides in the dispute for discovery of documents. On Tuesday, there was a hearing in relation to what is termed “non-party” discovery against Aer Lingus, which is not a party in the proceedings.

Ryanair sought discovery of any communication between Mr Cullen and Aer Lingus chief operating officer Mike Rutter arising out of emails exchanged between the two men in the run-up to the threatened strike.

Martin Hayden SC, with Eoin O’Shea BL, said the information was of significant commercial importance to its rival Aer Lingus during the summer of 2019. It would assist his client’s case or could undermine the defendants’ case.

Mr Justice O’Moore refused the Ryanair application for a number of reasons.

He said in reality the discovery application arose from Ryanair concerns that its confidential information was being shared with Aer Lingus.

Viewed properly, the (Cullen/Rutter) emails did not support the proposition that Aer Lingus had documents relevant to the issues actually being litigated in these proceedings, and the breadth of the discovery sought, he said.

The scope of the discovery, which Ryanair declined to limit at the hearing, was the least of several reasons why the discovery application fails, he said.