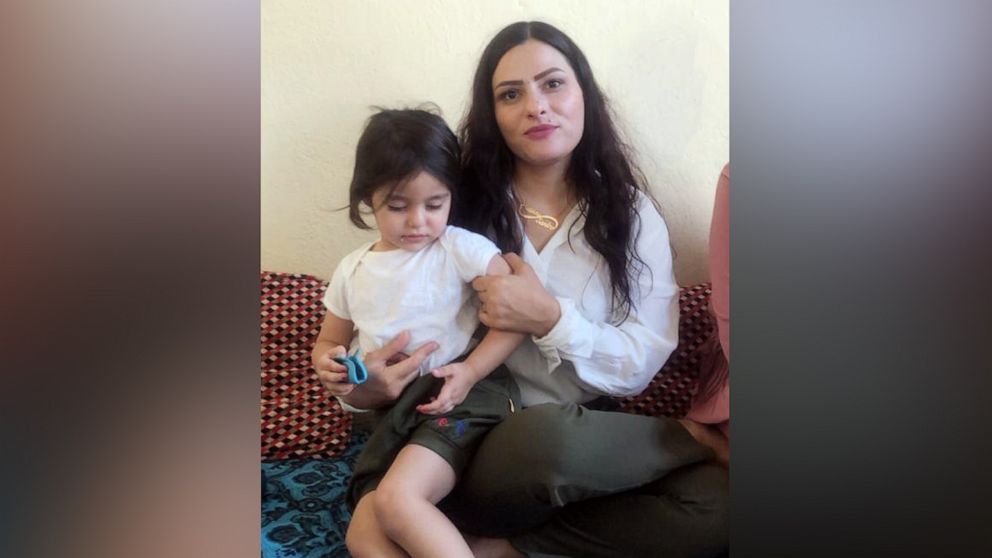 “Everything bad that you think of was there,” Sarina told ABC News in a video call, wiping away tears. “I was feeling like, ‘I’m gonna die. Why?'”

She said she came to terms with dying during her first attempt to get inside Hamid Karzai International Airport in Kabul on Aug. 19, surrounded by shouting, gunshots and beatings in a sea of thousands of people desperate to flee — but she said she told herself if she could just get her two-year-old daughter out of the Taliban’s Afghanistan, it would be OK.

“It was not easy that night,” said Sarina, whose name ABC News has changed for the safety of her family still in Afghanistan. “One second I thought I lost my daughter forever. I thought, ‘This is not the life I wanted…I will remain under Taliban, and they will kill me. At least my daughter will be safe.”

After waiting outside the airport for more than 10 hours, where she said they were treated like “animals,” her family returned to their shelter in Kabul, saying her daughter had seen enough.

It’s a day Sarina said is seared in her memory as a “nightmare” and one she hopes her 2-year-old will forget — although bruises on her “tiny face,” as Sarina called it, pointing to her cheeks and explaining their shoulders pushed into their child in the crowd, would serve as a painful reminder of what they had endured.

“My eyes begin, like, filled with tears,” she said, when she’s asked about their journey. “I think it’s not possible to forget those moments that much soon.”

Her husband also came out with bruises, she said, after Taliban fighters whipped him with strands of rubber. Thousands queued outside the airport, and thousands, like Sarina, didn’t make it out of Afghanistan that day.

“The entire night, I cried. I thought ‘Why why? Why did this happen to my daughter?’ She is my everything. She’s a little angel,” she said, through tears. “She was crying. and she told me, ‘Mommy, Mommy, home? Home? Home?'”

Surrounded by chaos, Sarina said she thought to herself, too, “Where is home?”

Fighting for women of Afghanistan — and her life

Sarina spent nine years studying in India, but returned to Afghanistan after completing her Bachelor’s Degree to work in women’s activism.

“There were job opportunities in India for me, but I let them, I let them out. I wanted to be in my country, feel the pain of those poor people, those women, that I really need — I really need to help them,” she said.

She said she worked on USAID projects and in a legal clinic for nearly three years, helping women divorce their husbands after domestic violence, before taking her “dream job” at the relief and development organization, Cordaid.

“Millions of girls, they want education. They want to study in universities. They want jobs. Even if you go to the villages of Afghanistan, you can see that desire in their eyes — how much the Afghan woman wants education,” she said.

But her work — and her life — became at risk when the Taliban seized power, she said. She was called to be evacuated because she was a target.

After the failed first attempt, which she called “traumatic,” Sarina bunkered back down with her family and seven other women in Cordaid — a Dutch development organization she worked for since 2019 which campaigns for women’s rights and independence. When she said she was feeling the lowest, she received a text from a stranger in the U.S. asking how she could help.

“That moment I needed some good words,” she told ABC News, choking up. “Someone telling me that ‘You’re okay, we are with you.’ And that was the moment Cori told me that, ‘Don’t worry Sarina, now I’m with you, many other people are behind you. You’re not alone. We are trying to help you.'”

Cori Shepherd Stern, an Oscar-nominated filmmaker who has an adopted refugee daughter, reached out to Sarina after learning of her situation through a mutual friend. It gave her the motivation she needed for a second attempt two days later.

Shepherd Stern told ABC News it was one of the most “emotionally intense” moments of her life.

“The sheer terror she was feeling, the horrified shock from what she was witnessing was very, very clear and immediate to me,” she said. “I took steps to logistically help her but more than anything, I tried to call out to her from a safe place and stay with her until she and her daughter were safe, too.”

Using Google Maps and communicating with volunteers outside Kabul, Sarina said she and her team were able to find the Dutch army behind the Baron Hotel on Aug. 26, and yelled out, ‘”Holland, Holland!'” The Dutch government had agreed to take the women of Cordaid and their families to safety.

“Finally, that was,” she said, stopping to cry. “That was the moment of victory — but I’m not happy. My family, my mom, my dad, my sisters, I immediately called my dad and told him that I am not happy. I don’t have you in here. I’m not happy. He said ‘don’t worry about that.’ I thought, ‘No.’ Because I know that my dad has done a lot for us.”

Turning to help get her family out

Acknowledging how far she’d come in days alone — from Kabul to Pakistan and from Pakistan to Turkey and from Turkey to Amsterdam — where she’s been at a military base for Afghan refugees for the last 10 weeks — she’s extremely distressed because her family is behind.

“How can I be safe, and they are all miserable?” she said. “They are not safe,” she continued, adding that she’s particularly concerned for her father.

“He is, right now, in depression,” she said, then recalling the version of her father she is used to, bringing a smile to her face. “He is a legend. He is like a hero. He studied at all times of his life,” she said, listing all the places where he has taught and spoken.

Shepherd Stern, who helped Sarina with moral support, and a small team of volunteers are now helping her family with paperwork to get them out. The options they’re looking into include a P-2 visa for her father or individual humanitarian parole for each family member.

But an unprecedented 20,000 Afghan nationals like Sarina’s family have requested parole since August — more than 10 times the number of applications received from around the world in a typical year, USCIS confirmed to ABC News in a statement.

The agency said they are surging resources and training personnel in response — but activists say it isn’t coming soon enough.

“This family needs to get out now,” Shepherd Stern said.

Sarina talks with her dad on the phone every day, multiple times a day, and she said he tells her, “‘My dearest daughter. You should follow your education. You should keep it up.'”

“He was always telling me that you should stand on your feet. ‘I am educating you to be a strong woman,’ and I’m a strong woman, but I am feeling bad that he is not here,” she cried. “He does not deserve to be over there while these people rule over him.”

Because of his devotion to educating women, she said she expects more from the U.S. and international aid agencies to help get her family out.

“It’s a matter of saving the lives of five people,” she said.

Sarina said she refuses to think what she considers unthinkable — that they may not get out.

“Life ends for them — because there is nothing left over here. What should my dad do? What should my sisters do? You tell me — what’s left? It’s mean — it’s life-ending for them.” she said.

“I just don’t want to think about that,” she added, with optimism in her voice. “They will get out soon.”

The Netherlands managed to evacuate around 2,000 people like Sarina from Afghanistan.

She has a permit for residency for five years — but it’s unclear when she’ll get settled in a home. To prepare herself, she watches Dutch language lessons on YouTube every day and is now taking classes at a local university offered to refugees. She plans to pursue a Master’s in gender and sexuality studies and become a professor — like her father.

While her time at the camp in the Netherlands has presented new challenges, it has also brought new blessings: Sarina learned on Tuesday that she is approximately eight weeks pregnant.

It’s all the more reason she wants her family out.

“Please help my family. Get them out of Afghanistan, please. That’s a request. That’s a humble request,” she said, with special devotion to her father. “I am everything I am today because of him.”