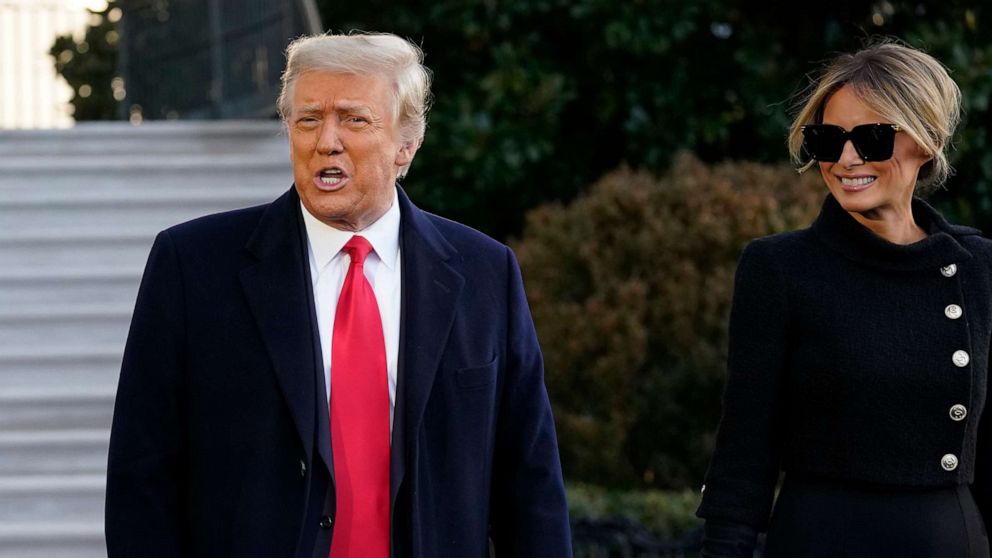 There’s no questioning the Republican Party’s loyalty to former President Trump these days — and a gathering of potential 2024 candidates over the weekend in Las Vegas only underscored that point.

But as for Trump’s loyalty to the GOP, new reporting out Monday morning serves as a reminder of how tenuous it has been.

In his forthcoming book, “Betrayal: The Final Act of the Trump Show,” ABC’s Jonathan Karl reports for the first time on a Jan. 20 conversation between the soon-to-be-former president and Ronna McDaniel, the Republican National Committee chair.

“I’m done,” Trump told McDaniel just after he boarded Air Force One for the last time as president, according to Karl. “I’m starting my own party.”

The full exchange has McDaniel warning of the consequences — “we will lose forever” — and Trump saying he didn’t care. It was only after the RNC threatened to take control of Trump’s email list, among other potential legal actions, that Trump backed down, Karl reports in the book.

In an interview with Karl, Trump claimed not to recall the conversation, and said he never threatened to start a new party.

Whatever might be said about the GOP’s allegiance to Trump for the foreseeable future, the book is a timely reminder that loyalty has often been a one-way street for the former president.

Another thing the book shows is how much is still not known about Trump’s actions before, during and after Jan. 6. Big GOP wins last week are papering over some history that could be revealed anew.

While there has been no shortage of commentary on the fact that Virginia Gov.-elect Glenn Youngkin kept former Trump at an arm’s length, speakers — including a number of possible 2024 presidential hopefuls — at a gathering of the Republican Jewish Coalition leaned hard into their support of Trump.

“President Trump’s single most redeeming characteristic — the man has a steel backbone and he doesn’t back down,” Sen. Ted Cruz, R-Texas, said Friday to boisterous applause from the crowd which included Miriam Adelson, wife of the late Republican donor Sheldon Adelson. “After years of Republicans scared of their own shadows, there’s a reason we celebrate a leader who’s willing to stand up and fight.”

Still, prominent Republicans expressed that heavy Trump involvement may not be the best move in every campaign. Rep. Lee Zeldin, R-N.Y., who is running for governor, did not commit to campaigning with Trump Saturday when asked by a reporter.

Similarly, Sen. Rick Scott, R-Fla., who is the chair of the National Republican Senate Committee, told ABC News that Trump will do “whatever he can” to help Republicans take control of both chambers of Congress in 2022. Depending on the race, it could mean standing back.

Next year’s midterm primaries are just months away, and Republicans could be seeing more top names entering the political fray as the timeline creeps closer. One of the party’s top recruits, New Hampshire Gov. Chris Sununu, is among those expected to make a decision about his campaign prospects in the near future.

“I think I’d like to make a decision before the holidays, frankly. I don’t want this weighing on me and weighing on the citizens,” Sununu told Fox News over the weekend regarding whether he plans to run for Senate or for governor.

During this weekend’s Republican Jewish Coalition Annual Leadership Meeting, Sununu was publicly urged to run for Senate by party members who are seeking to win the majority in the upper chamber. “I’ve never been more optimistic than I am right now about us taking back the Senate. It starts with great candidates, because Chris Sununu, if you’re watching or listening, please run,” Sen. Lindsey Graham said on Saturday.

Republicans have been eyeing New Hampshire as a possible pick-up opportunity since Trump trailed Hillary Clinton there by less than 1% in 2016. Although that gap widened significantly between President Joe Biden and Trump, Sununu could be the kind of candidate who appeals to Republicans who did not support Trump but remain party loyal. The governor, who is just one of a handful of Republican executives overseeing largely blue electorates, already set himself at odds with the Biden administration over the culturally salient issue of vaccine mandates, calling the federal policy an “overreach.”

ABC News’ “Start Here” Podcast.Monday morning’s episode features the passage of a long-anticipated infrastructure package with new reporting from ABC News Congressional Correspondent Rachel Scott, who tells us what’s in the bill. Then, a concertgoer from Travis Scott’s Astroworld Festival describes her experience at the packed event that led to the deaths of eight people and multiple injuries. And, ABC News contributor Steve Ganyard offers analysis on the attempted assassination by drone of Iraq’s outgoing prime minister. http://apple.co/2HPocUL