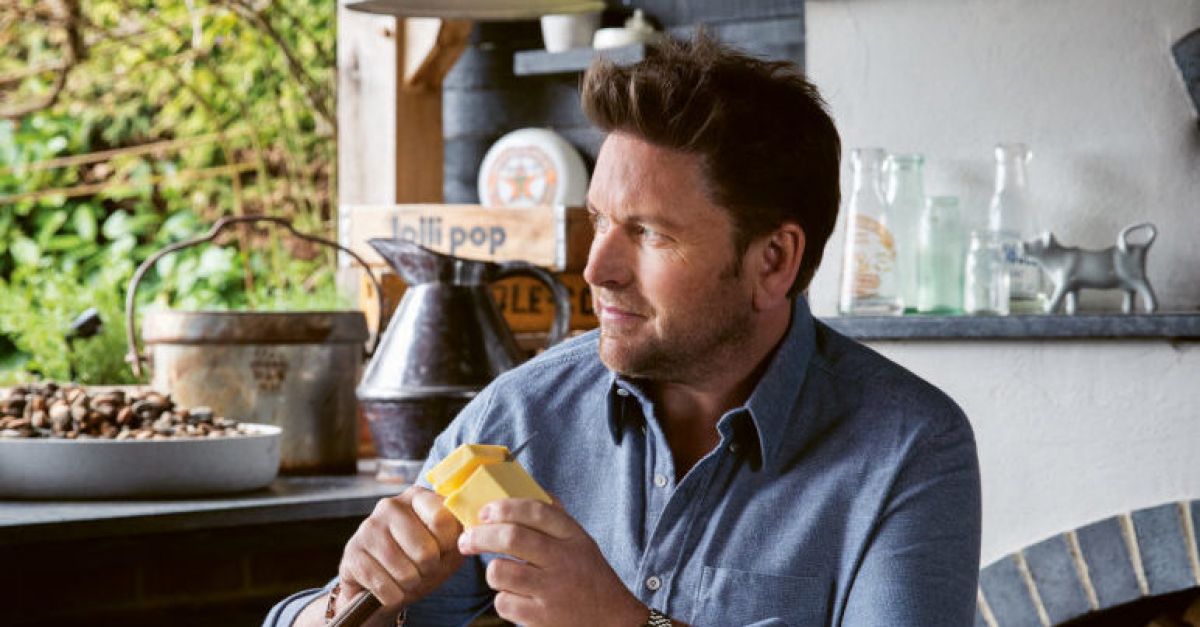 Every now and again, chef James Martin’s mum would let him make his own packed lunch – and on those occasions, he knew exactly what was going in his Spider-Man lunchbox.

“I’d have buttered white sliced bread and mashed up banana with a Cadbury Flake on it, press it down, wrap it in cling film,” he remembers fondly. “Then you get to lunchtime and it would sort of look – when it was out the cling film – almost like a tennis ball. It would be all congealed together. But you managed to eat it. Nobody wanted to swap with me, but it was proper.”

Several decades on, this is a Yorkshireman who puts butter on roast potatoes (specifically when they’re “not cold, cold”, but lukewarm) and has now written a whole cookbook devoted to the yellow stuff, simply titled Butter.

It shouldn’t be a controversial topic, but let’s be honest, people can get judgy about how much butter you slather on stuff (for instance, if you put it on gingernut biscuits… cue lots of raised eyebrows). Everyone believes their way of buttering toast is the ‘right’ way.

“If it was my granny, she would butter it so much you could see a wedge of butter on it. I can’t do butter if it’s not visual on hot toast,” says Martin of his own butter-to-toast ratio preference. “I can’t eat it; it’s got to be enough butter to make it still visual.”

Then there are the health concerns – Martin, 49, has a family history of heart disease and has a check-up every six months. “I’m fine,” he says. “It’s everything in moderation. I don’t drink, I don’t smoke. So there you go. If you complain about me putting butter on my bread, then stop bloody smoking or stop drinking.”

One of the reasons butter can (ahem) churn up so many opinions, he says, is because “people don’t know as much about it as they should”. The telly chef recently did a demo where 50% of the audience didn’t know how it was made.

Long day at work ahead pic.twitter.com/0VCqwswT4g

“People just think butter is butter, and it’s not,” he says, explaining how different butters suit certain types of cooking. “If you’re going to do French-style patisserie, you just don’t use the stuff you get in the supermarket – it’s too heavily watered, and there’s too much water in buttermilk. Really, really good pastry butter should snap in half like a Dairy Milk.”

The chef is classically French-trained himself, and he believes “there is no substitute” for butter – certainly not margarine. “Margarine should be banned. It’s dreadful, dreadful stuff,” he says. “It’s two elements away from plastic, it’s horrendous stuff.” He even quotes Anthony Bourdain in the book, who says it’s “not food”.

“I’m a farmer’s kid,” Martin continues. “We’ve always had full-fat milk, butter and cream. And that’s what we had. There wasn’t such a thing as semi-skimmed milk in our house.”

He suggests those anti-butter arguments don’t factor in the full picture. Of course, eating a block a day isn’t going to be good for you, but “it’s not the butter consumption. It’s the ready-made food, it’s the packet food, the hidden salt, hidden fat – that’s the problem in this country,” he says. “It’s not the butter in a butter block, or butter you put on your toast. It’s the fact that not as many people cook in the UK as they do in France or Italy or Spain.”

The pandemic has shifted that attitude slightly, he reckons, and he also believes people are now “more appreciative” of the restaurant industry and those who work in it.

“You’ve spent the last 18 months to two years cooking for yourself, you realise it’s not that glamorous, is it, every single day of the week, day in, day out?” The bookings for his restaurants are busier than ever – although an issue is the exodus of hospitality staff, which Martin puts more down to individuals having the space and time to consider their job prospects over the various lockdowns, rather than just Brexit.

He argues aspects of the food scene need to change to entice people back, including customers being willing to pay more for what they’re getting. “You go to France and have a croissant or a coffee, it’s twice the price it is over here. You don’t question it when you’re on holiday, because that’s the price,” says Martin. “For too long, we’ve been price-sensitive over everything.

“We’re too price-sensitive in terms of food in our supermarkets. We constantly strive for cheaper and cheaper food and as much as it’s great to have value, for sure, you can’t continue that spiral down. At some point, you’re going to hit rock bottom.”

Whatever the difficulties – be it prices or people expecting strawberries in December – Martin believes he is “in the business to help others – our job is to serve and help and provide a service for other people, for them to enjoy themselves. That’s what we do. That’s why we work the hours we work” – and he loves it. Feeding people is “a magical thing” – and if there’s butter involved, all the better.