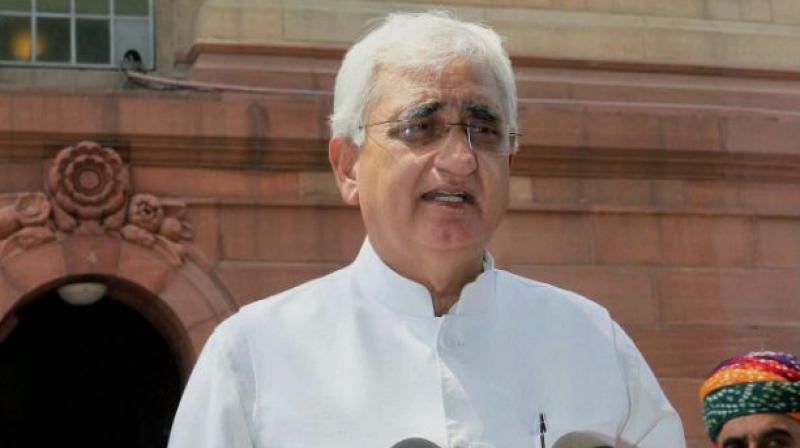 New Delhi: Senior Congress leader Salman Khurshid has come under intense attack from the BJP and some of the Congress’ own allies, like the Shiv Sena, for some comments in his new book Sunrise Over Ayodhya: Nationhood in Our Times, in which he has drawn comparisons between the “followers of Hinduism” and ISIS and Boko Haram.

Attacking the Congress and its leadership for insulting the country’s majority Hindu population for political gain and “crushing their sentiments, hurting them again and again”, the BJP on Thursday asked party president Sonia Gandhi to clarify whether she agrees with Mr Khurshid’s equating Hindutva supporters with the Islamic State.

Shiv Sena Rajya Sabha MP Priyanka Chaturvedi said Mr Khurshid tried to “demonise the Hindu religion, that has only spoken of Vasudhaiva Kutumbakam”. She added: “Half-baked information can get you book publicity but (also) hurt the sentiments of millions of Hindus. Shame,” she said in a tweet. The Congress, NCP and Shiv Sena run a coalition government in Maharashtra in which relations between the partners are already strained, and this could aggravate the situation further.

In a chapter titled “The Saffron Sky”, Mr Khurshid has written: “Sanatan Dharma and classical Hinduism known to sages and saints is being pushed aside by a robust version of Hindutva, by all standards a political version similar to the jihadist Islam of groups like ISIS and Boko Haram of recent years.”

A Delhi-based lawyer has filed a complaint against him, accusing the 68-year-old Mr Khurshid of comparing Hindutva with radical Islamic terror groups. Many feel this paragraph could be used against the Congress in the coming Assembly elections in five states early next year. In the 2012 Assembly elections too, some statements attributed to Mr Khurshid on the Batla House encounter in New Delhi were used by the Congress’ political rivals.

The BJP dared the Congress’ “incchadhari Hindus”, Rahul Gandhi and Priyanka Gandhi Vadra, to clarify if they support Mr Khurshid’s remarks while campaigning in Uttar Pradesh for the coming Assembly elections.

The BJP recalled that the term “Hindu terror” had been “coined at the Congress’ headquarters”, and affirmed by former Union ministers Sushil Kumar Shinde and P. Chidambaram, and that another senior Congress leader had coined the term “Hindu Taliban”. BJP national spokesperson Gaurav Bhatia said the book had “hurt the soul of India” and asked Mrs Gandhi to make her party’s stand clear about Hindus.

“Why is Soniaji not immediately sacking such leaders from the party (Congress). In politics, you can be our opponent, but you cannot be the enemy of the country. The Congress is spreading hatred against Hindus. If you respect Hindus, then break your silence… tell the nation what is Congress’ ideology. If you remain silent — and that is your right — there will be no doubt what is the Congress’s ideology,” the BJP leader said. He added that the Congress has been busy doing communal politics and dividing Indian society.