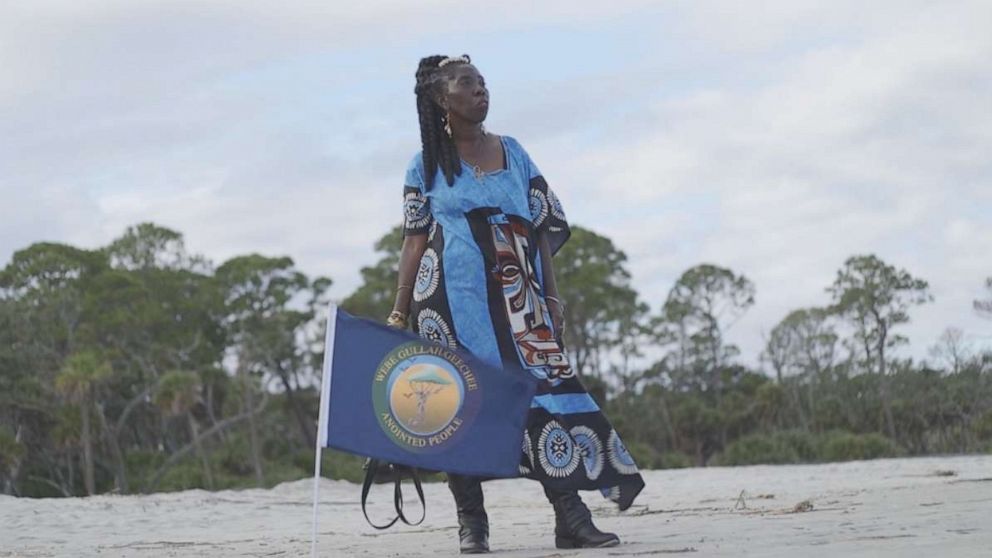 Joseph Fields’ family has farmed the same land on the South Carolina Sea Islands for over a century.

His fields of strawberries were dug where slaves once lived and where the first shots were fired in the Civil War to set them free.

Fields’ grandparents were farmers, who passed the land on to his parents, who passed it on to him, each generation working the fields forged on a graveyard of oppression.

“My grandson, he wants to take over the farm. I’m the third generation, and he’ll be the fourth generation,” Fields said. “What’s special about this place? Because we love it. We, by the water and everybody over here is brothers and sisters. And everybody enjoying the free life, the free outdoor life.”

But now Fields’ land, his family legacy and many others like him are facing a new threat: Rising sea levels, eroding coastline and weakened infrastructure caused by climate change are endangering an entire identity of people defined by a connection to the ocean.

Fields is Gullah/Geechee — people who have traced their history to the founding of the United States. Descendants of West African slaves, they were brought to the South Atlantic for their experience in farming and have since inhabited the Sea Islands from Jacksonville, North Carolina, to Jacksonville, Florida.

In North Carolina, tobacco farms were king; in Georgia, it was cotton. In South Carolina, it’s rice. The Gullah/Geechee have used the area’s series of barrier islands and waterway systems to cultivate ocean rice for years. But the rising sea levels, pervasive flooding and increased temperatures have made farming extremely difficult, according to local Gullah farmers.

“If nothing is done, I’m afraid a community like this may not really exist 80 years from now, and that’s not hyperbole. That’s just dealing with the facts,” said marine scientist Albert George, a Gullah/Geechee native.

Fields’ grandson, Xavier Joseph, wants to follow in the family tradition, but he worries about the impacts the changing climate will bring.

“I am a little worried about that because you have to think about the rising temperatures around the world and how it gets harder to grow plants, especially sustaining moist soil,” he said. “And then with rising waters, this is already low land, and we’re this close to the ocean.”

George has dedicated his career to understanding how the rising sea levels will affect Gullah/Geechee life.

“We have seen a four-times increase in the amount of sea level rise here in the Charleston Harbor that’s documented. We have broken records for the last eight-year cycle,” George said. “How much more data, how much more evidence do people need to say, ‘Something is going on?'”

The Gullah Geechee land has been designated by Congress as a Cultural Heritage Corridor. But they are now fighting to save a region rich in history and generational roots.

“Even though the ocean may be coming … we have been here and we ain’t going nowhere,” said elected Gullah/Geechee leader Queen Quet Marquetta Goodwine. “We’re people of the sea. I live on the ocean. … We will rise and we will remain.”

Not only do the Gullah/Geechee face the threat of rising sea levels, but also decades of development projects across the coastal region, which have decimated habitats, disrupted natural drainage systems and eroded the delicate coastline. Scientists and residents say unfettered development in the region has exacerbated flooding.

“Of course, people can move, but so much of who we are and what we are as people is connected to a sense of home, a sense of place,” George said. “So, to say that we would be the same without the land is not understanding who Gullah Geechee people are.”

According to George, the high-density development projects in the community are taking the already bad situation of rising sea levels and putting “it on steroids” by increasing the flooding.

“It’s gonna have a disproportionate impact on those people who don’t have the resources to mitigate the risk,” he said.

St. Helena Island, located about two hours south of Charleston, is in many ways the center of Gullah/Geechee nation. It’s where Queen Quet calls home. She is an Ivy League-educated author, singer and mathematician who is advocating on behalf of her people around the world.

She believes her community is ground zero for devastating climate change effects.

“The sad thing about it is the other people who are now paying attention to it wouldn’t listen when we were talking at first. It was almost like earlier they acted like … they couldn’t understand that I was trying to explain to them that our community is literally where people need to look,” she said. “If they want to see what changes have happened and are happening, this is the place to do it.”

The Gullah/Geechee culture is inextricably tied to the land, Queen Quet said, and it’s imperative that there’s an effort to save it. She said that the land holds complicated American history that should be preserved.

Queen Quet knows the importance of connecting generations. Her family has lived on the same plot of land since 1862. The land is her ancestral home.

The flooding threat not only affects her and her community’s homes, but also their sacred burial grounds. Queen Quet can point to where her great-great-grandfather is buried, and generations after, which is rare for Black people in the U.S., where tracing ancestral lines is sometimes impossible because of the slave trade.

“I think a lot of Gullah/Geechees, especially on St. Helena Island, the ones who live on the Sea Islands, a lot of us can do that and we take it for granted and that’s the unfortunate thing,” she said.

“When I say that the land is our family, I literally mean that you are talking about the blood, the sweat and the tears of my ancestors being in here. When I sweat, my sweat drops on top of their sweat that was already there,” she said. “If you say to me, you want to buy my land, you are asking me to sell you my family. So you’re telling me, put my family back on the auction block.”

“There’s no consideration, there’s no price tag, there’s nothing you could give me to sell you my land,” she added.

The South Carolina Sea Islands are one of the most popular tourist destinations in the country. The Charleston region alone is growing three times faster than the U.S. average, which means more tourism, more building development and more roads that need to be paved — all of which further strain the delicate community.

Charleston Mayor John Tecklenburg campaigned on the promise of protecting the city from climate disasters.

“I don’t wanna be the mayor that says, ‘We gotta head for the hills,'” he said. “For years we’ve built in the wrong places. And it caused flooding problems.”

Tecklenburg said the city has had to revise its stormwater manual to have better drainage systems, as well as implementing protections for surrounding marshes and wetlands. It included building property to establish natural habitats and working with the U.S. Army Corps of Engineers to erect a massive sea wall meant to protect Charleston.

But some within the Gullah/Geechee community said they have heard this story before. Queen Quet said building sea walls are really about protecting mansions, hotels and the business districts, not so much lower-income communities by the water’s edge.

Tecklenburg said that his plans to build an 8-mile sea wall will protect the east side of Charleston, a historic Black neighborhood, and “almost all of our public housing.”

When it comes to protecting the Gullah/Geechee Nation, Tecklenburg said, “We do it a drainage basin at a time — figuring out where the water goes, addressing those areas that flood the most frequently, and trying to address them first, but also look at the long-range protection of our entire city.”

But many in the Gullah/Geechee community said they are not waiting for someone to save them, and are looking for solutions within. Queen Quet said she is leading a project called Green and Gullah/Geechee Communities, which includes working with the Environmental Protection Agency and environmental architects to educate people on sustainable infrastructure, such as creating a “living shoreline” next to new development projects to help mitigate flooding.

“We’re still right here,” she said. “God is not giving us a spirit of fear, but a power and of sound mind. My mind is good. My mind is sharp. My spirit says that if people would do right, we could reverse this.”