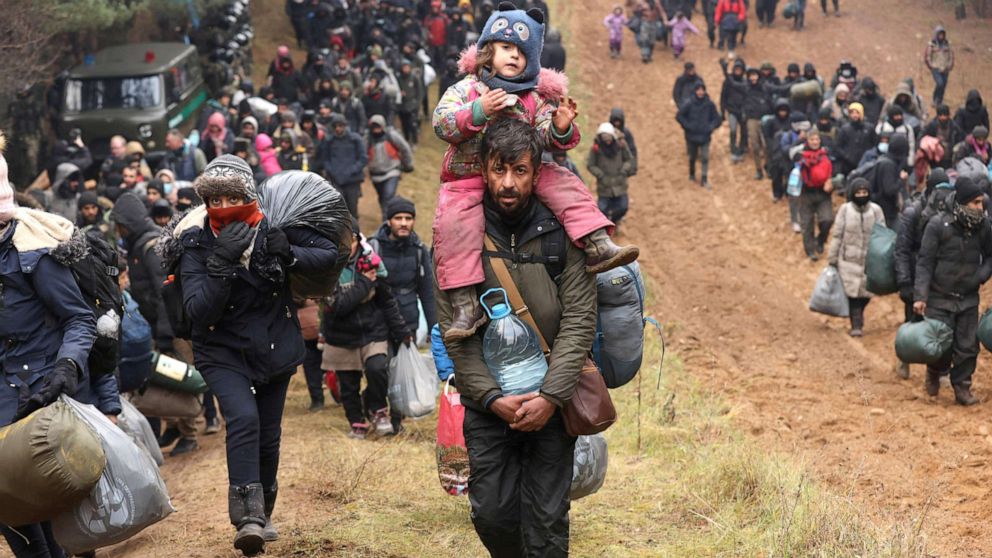 Hundreds of migrants moved to a crossing point on the border between Belarus and Poland on Monday, encouraged by Belarusian security forces in what Poland’s government said was another attempt by Belarus’ authorities to exacerbate the migration crisis there.

Over 2,000 migrants, mostly from the Middle East, have been trapped in a makeshift camp at the border since last week, caught up in what European Union countries say is an effort by Belarus’ authoritarian leader Alexander Lukashenko to orchestrate a humanitarian crisis on its borders.

On Monday, hundreds of migrants packed up their belongings and moved toward the border crossing point itself at the Polish town of Kuznica in another attempt to cross. Polish guards in riot gear again blocked their path and the crowds halted.

Videos released by Poland’s authorities showed hundreds of people sitting on the road at the crossing in front of a razor-wire barrier and Polish police.

“An attempt is being made to force the border through, all under the supervision of Belarusian services,” Poland’s border service wrote on Twitter.

Belarus’ Lukashenko is accused of luring thousands of migrants to Belarus over recent months and funneling them to the border with Poland and neighboring Lithuania, in a form of retaliation against those countries for supporting Belarus’ pro-democracy movement that came close to toppling him last year.

Poland and Lithuania have blocked the migrants, and hundreds of people have become trapped in the forests along the border, often for weeks in freezing temperatures and without food.

The campaign blew up into a major European crisis last week after Belarus marched the 2,000 migrants up to the border close to Kuznica. For seven days, the migrants have been living in the open air in a make-shift camp pressed up against the border’s razor-wire fence and blockaded by dozens of Polish police and border troops.

Polish authorities over the weekend had accused Belarus of preparing to stage a fresh attempt to escalate the standoff at the border.

Activists from Polish refugee rights groups that have been providing humanitarian aid to migrants in the woods also accused Belarusian authorities of spreading misinformation to encourage the migrants to try to cross in the hope of inciting clashes.

“For several days now we have witnessed the migrants being subjected to a professionally prepared disinformation action,” Grupa Granica, an umbrella group for the activists said in a statement Sunday. It accused Belarus’ authorities of telling the migrants false information that Germany and Poland were preparing to settle them.

“This suggests attempts at raising the migrants’ hopes for a safe passage to western European countries, to then keep them in the camp at the Polish border, all in order to exert further pressure on the EU,’ the group said.

A Syrian man in the camp on Sunday told ABC News people there believed the EU on Monday would consider a plan for evacuating them, something that is not true.

The man, who asked to be identified as Yousef, said Belarusian guards had stopped handing out food and firewood on Sunday, in what he believed was an attempt to make people desperate.

“They are trying to make people crazy,” he said by phone. Yousef said he and nine Syrians with him had not eaten for four days and that they had been trapped in the forest for nearly a month.

Belarus has blamed the crisis on Poland and European countries, accusing them of failing to observe human rights.

EU foreign ministers were meeting on Monday for a planned summit where it was expected they will announce expanded sanctions against Belarusian individuals and entities involved in the migration crisis.

The EU has been seeking to cut off the flow of migrants to Belarus by threatening sanctions against airlines flying them there. Those efforts appear to have borne some fruit in recent days.

Turkish Airlines has announced it will no longer fly Iraqi, Syrian and Yemeni citizens from Istanbul to Belarus’ capital Minsk, and the Syrian carrier Cham Wings Airlines has also said it is halting its flights.