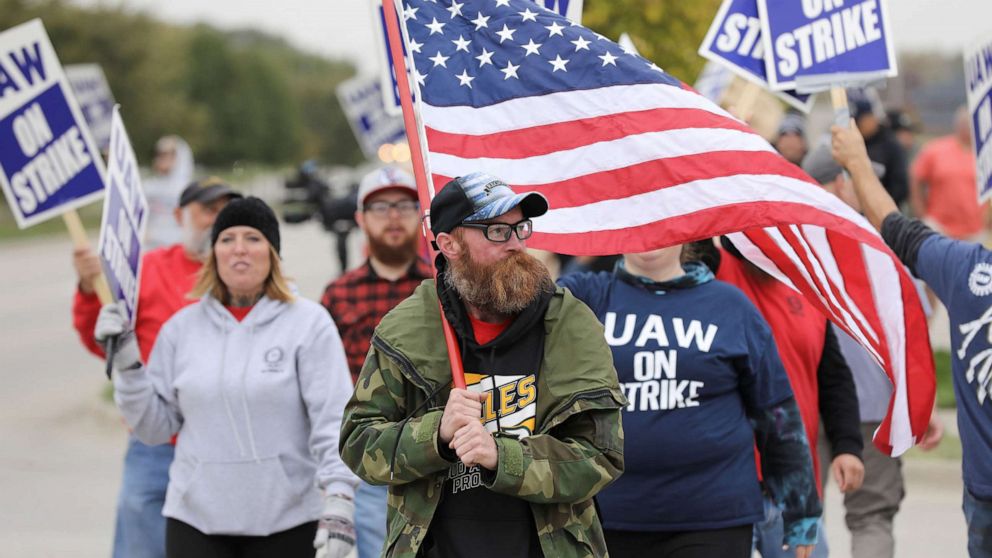 The United Autoworkers Union announced it has reached a third tentative agreement that now heads to local unions for a ratification vote that could end the ongoing strike of thousands of John Deere workers.

Results of the latest vote are expected to come in on Wednesday, a union rep told ABC News, after the tentative deal was reached late last Friday. The strike will continue through the ratification vote.

The work stoppage includes employees at the agricultural machinery giant across 12 facilities in three states and just crossed the one-month mark after commencing on Oct. 14, when workers overwhelmingly rejected a contract offer from the company that would have given immediate 5% or 6% wage raises, among other things.

By a much closer margin — 55% against and 45% in favor — UAW workers rejected a second tentative agreement earlier this month that would have guaranteed an immediate 10% wage increase as well as improved retirement benefits to new employees and more.

Many have pointed to the ongoing strike and negotiations as a signpost of the new, post-pandemic labor movement that gives workers an apparent upper hand as major companies have reported struggles to find staff and record-high numbers of workers are quitting their jobs.

The Labor Department said just last week that a new record-high number of employees — representing some 3% of the total workforce — quit their jobs in September, while job opening figures also hover near record highs. Meanwhile, new unionization efforts are emerging at major companies including Amazon and Starbucks.

Details on the latest contract agreement were not immediately released by the union or John Deere, but the UAW said it includes “modest modifications.”

“John Deere and Company has made a last, best and final offer to the UAW negotiating team that includes modest modifications to the last tentative agreement presented for ratification on Nov. 2,” the UAW said in a statement.

“As a result, the UAW will present the Company’s offer for ratification and, as has been the case throughout the bargaining process, will support the outcome as determined by our members,” the statement added, saying the strike continues and voting information will be provided by local unions to members.

In a statement earlier this month after the union rejected the second tentative agreement, Marc A. Howze, the chief administrative officer for John Deere, said, “Through the agreements reached with the UAW, John Deere would have invested an additional $3.5 billion in our employees, and by extension, our communities, to significantly enhance wages and benefits that were already the best and most comprehensive in our industries.”

“This investment was the right one for Deere, our employees and everyone we serve together,” Howze added. “Even though it would have created greater competitive challenges within our industries, we had faith in our employees’ ability to sharpen our competitive edge.”

John Deere has also called the second, rejected agreement “groundbreaking” on its website, saying it would allow the workers to “share in our current and future success through wages and benefits that are not only the best in our industry — they are groundbreaking.”

The company did not immediately respond to ABC News’ request for comment on the latest negotiations Monday.

The first strike in more than three decades at John Deere comes after the company reported earning a record-high $4.68 billion during the first nine months of the 2021 fiscal year, more than double the $1.99 billion reported during the same time last year.

A GoFundMe page started to support the workers while they are on strike has garnered some $158,591 in a little over three weeks, from more than 3,500 donors.