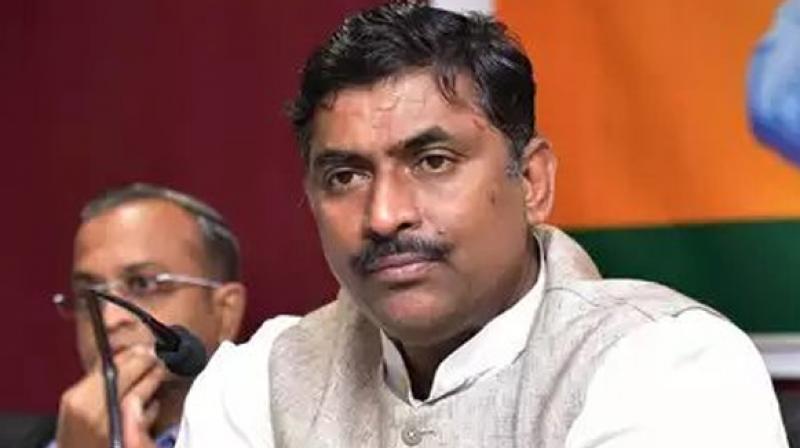 Bhopal: BJP General Secretary P Muralidhar Rao on Monday triggered a huge row with his statement that people belonging to Brahmin and Baniya communities are in his "pockets".

Rao, in-charge of Madhya Pradesh, came under attack from the Congress which sought an apology from the BJP leader, who later claimed the opposition party has "distorted" his statement.

Addressing a press conference here at the BJP's state headquarters, Rao said the party and its governments are going to have special focus on scheduled tribes and scheduled castes not as vote-banks but to address their concern like backwardness, employment and education.

After this, journalists asked Rao that perception about the BJP has been that it is a political party of Brahmins-Baniyas and he was talking about special focus on SCs/STs at a time when the saffron outfit's slogan is sabka saath, sabka vikas (with all, for everyone's development).

In reply, the BJP leader, while pointing towards his kurta's pockets, said, Brahmins and Baniyas are in my pockets. You (media people) termed us a Brahmin and Baniya party when most workers and vote bank were from these sections.

Rao said the BJP is working towards gaining trust of all sections of the society.

When the number of people belonging to certain sections was higher, people used to say the party belongs to them. We are working to add more people from the SC/ST sections in our party after finding their lower representation. We are reaching out to all and making the BJP a party for every section, he said.

Rao said the BJP is not leaving out any section, including Brahmins and Baniyas, from its representation, but only including those who were left out to become a national party in true sense.

After a 6-second video of Rao's controversial remark surfaced on social media and was shared by several leaders of opposition, state Congress president Kamal Nath lashed out at the BJP.

In a statement here, the former CM said the BJP gave the slogan sabka saath sabka vikas and his party's general secretary is saying the Brahmins and Baniyas are in his pockets.

This is an insult of these sections as the BJP is claiming its right over them. What kind of respect is given to these classes whose leaders have played an important role in building the BJP? BJP leaders have become arrogant due to power, he said.

Nath said the BJP should seek an apology from these communities. A party which talk about sabka saath, sabka vikas is now focussing on certain sections for power, he said.

Later, in a video statement, Rao said the Congress has a habit of "distorting" facts and statements.