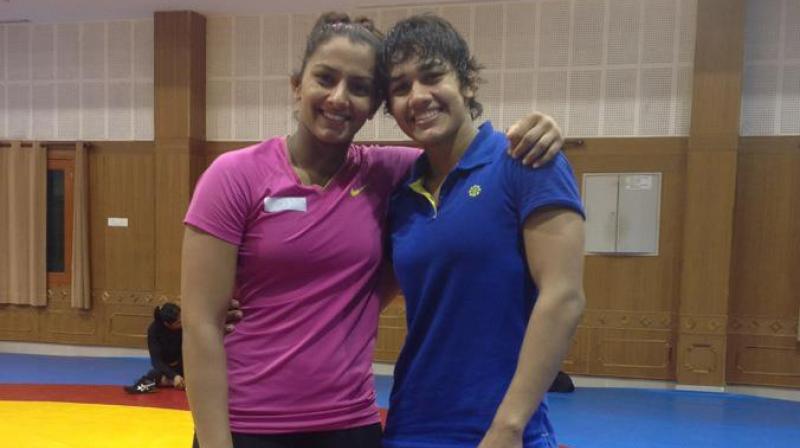 Gonda (Uttar Pradesh): Ready to take the mat after a three-year break, wrestler Geeta Phogat is not short on inspiration and motivation but a tad nervous about how her second innings will pan out.

Set to turn 33 next month and after giving birth to her first child, a lot of people has been telling her that wrestling won't be the same again for her because not only the sport but also her body has changed in the last three years.

But she is determined to make a successful comeback. After all, there are living examples that motherhood or age are not obstacles for a woman sportsperson.

"A lot of people tell me that age is not on my side. You know how people are. They keep telling me these things," Geeta told PTI as she readies for a comeback after three years at the National Championships her.

"But look at Maria Stadnik (from Azerbaijan). She is 33-plus and a mother of two. She has four Olympic medals and is a multiple-time world medallist. If you have fitness and you are focussed, you can do it."

"I have worked hard on fitness and it's time to prove myself yet again," the wrestler, who became the first Indian woman to win a Commonwealth Games medal in 2010, said.

One of the first few Indian women wrestlers to make a mark at the international level, Geeta says that mere thought of leaving the sport sends a chill down her spine.

"I have got a lot of success in my career but I have not yet got that feeling that it's time to quit. The sport is in my blood. I have been doing it for 20 years.

"Mann nahi maanta chhodne ka. The thought of leaving the sport scares me. I have Paris Olympics in mind," the winner of a bronze medal at the 2012 World championship added.

Geeta has spent the last few weeks at an Akhara (training centre) run by her husband Pawan Saroha's relatives in Delhi. She has trained only with male wrestlers, which has advantages as well drawbacks.

She talks about both.

"There are not enough strong girls in this Akhara, so I have trained with the men's wrestlers there. So strength and stamina is not an issue. I can say that I am fitter than I was when I took the break three years back," said Geeta.

"I'm not nervous about wrestling but I am coming back to the mat after a long time, so what I keep thinking about is how I am going to react to it now. I have not trained with girls, so I have no clue if I am strong or weak for my opponents. I don't know at what level my game stands today.

"When I will train with girls only then I can have a right assessment. Stamina, fitness and training have been good leading up to the Nationals. Even my family says that they see in me the same Geeta, that was at her best in 2012 but only competition will tell," she said.

Geeta acknowledged that the standard of women's wrestling has gone several notches up. They do not make just the number in India's travelling squad. They are treated with respect and considered a threat.

"The standard of women wrestling has really gone up in India. It's at a different level now. Wrestling has become fast now.

"Now we work more on sharpening technique and playing smart. The government is also now supporting sports persons and that is also making a huge difference."

So, does it make a bit jittery since her opponents, especially Sarita Mor, will prove to be a tough challenge?

"I won't say I am feeling pressure on comeback but that apprehension is there about how I am going to do in this fresh beginning. I still want to win medals for my country.

"I have wrestled with Sarita 5-6 times in the past. She has a strong defence and my game is a mixed one. But I am ready for the fight."