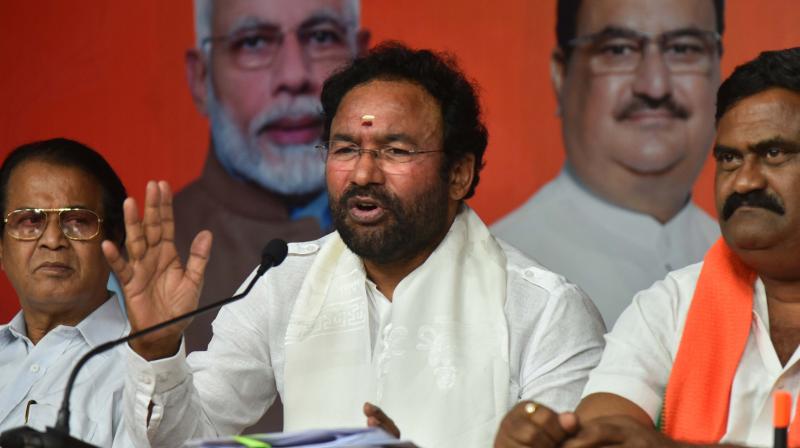 HYDERABAD: Union minister for tourism, culture and development of northeastern region G. Kishan Reddy said Chief Minister K. Chandrashekar Rao had made an agreement with the Central government to decrease the procurement of boiled rice from Telangana state. Defaming the Central government and terrorising the paddy farmers, Rao instigated dharnas across the state, he criticised.

Speaking at a media conference here at the BJP state unit office on Saturday, Kishan Reddy made it clear that the Central government never asked to halt paddy procurement in states. In view of surplus stocks of boiled rice in the country, the union government suggested states to decrease procurement of boiled rice, he said. “Boiled rice is not the problem of farmers, it will be sorted out by the rice millers,” he said.

Replying to a question, Kishan Reddy said the BJP staged protests demanding that the TRS government procure paddy. “Agriculture is subject of the state and the Central government do not have infrastructure in the states,” he explained. Farmers could understand the political interests of the TRS over paddy procurement, he said.

Kishan Reddy suggested Chief Minister K. Chandrashekar Rao to set aside egos and work for the development of the state and concentrate on job recruitment, three-acres land for Dalits etc. “I always stick to factual information, but minister T. Harish Rao blamed me on AIIMS at Bibinagar,” he said. The state government should respond to communiqués from the Central government, he said.

The union minister said the Tribals Day would be celebrated on November 15 on the occasion of Birsa Munda birth anniversary. Rs 1 crore was released for tribal museum and funds would be allocated for biannual jatara of Sammakka and Saralamma in February 2022, he explained. BJP senior leaders Ravindra Naik, Pradeep Kumar, Prakash Reddy, Sunita Reddy and others were present.