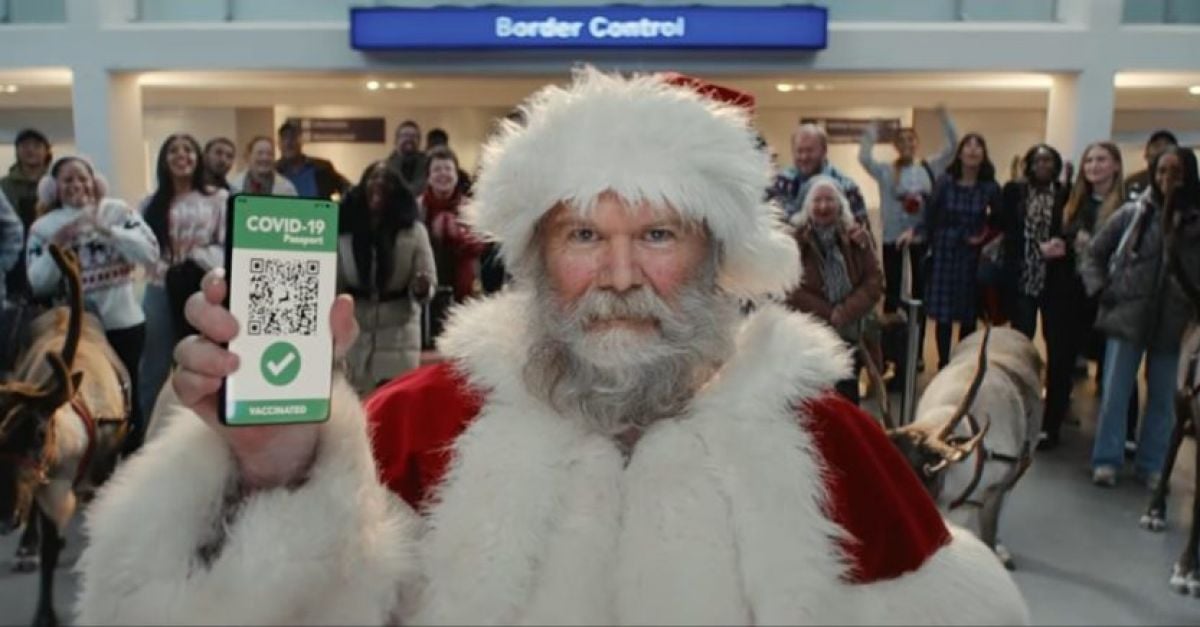 Tesco’s Christmas TV campaign in the UK, featuring Santa bearing a Covid vaccine passport, has prompted more than 3,000 complaints, making it by far the most complained about ad of the year.

The ad, titled This Christmas, Nothing’s Stopping Us, shows the supermarket’s customers determined to enjoy a proper Christmas with family and friends after last year’s Covid-related restrictions.

However, in one scene a reporter appears on TV with “breaking news” telling viewers that “Santa could be quarantined”.

He is then shown presenting his Covid pass at border control, proving he has been vaccinated to a customs officer so he can enter the country without restriction.

The scene from the full 90-second ad, which is set to Queen’s Don’t Stop Me Now, sparked fierce debate on social media after it launched on Saturday night.

Television presenter and nutritionist Gillian McKeith was among them, tweeting: “#tesco has a new Christmas advert that celebrates #discrimination & #segregation via a fully jabbed Santa who shows his medical status!”

She added: “Who in their right mind in management thought this was a good idea? If you don’t #BoycottTesco then you are #complicit.”

Another added: “Did I really just see a Christmas TV ad on ITV for Tesco to Queen’s ‘Don’t Stop me Now’ hit with families having fun / flying abroad etc & then a guy smiling flashing up his smart phone with a COVID passport on it?? Omg I am NEVER shopping at Tesco again #boycottTesco not ok.’”

Another tweeted: “Unacceptable and despicable. HUGE mistake on your part.”

The UK’s Advertising Standards Authority (ASA) said it was reviewing the complaints to see if they warranted an investigation for a potential breach of the rules.

A spokesman said: “We’ve received over 3,000 complaints regarding this ad.

“We are currently carefully reviewing these complaints to determine whether there are any grounds for further action.

“The large majority of complaints assert that the ad is coercive, and encourages medical discrimination based on vaccine status.”

A Tesco spokeswoman said: “We respect everyone’s views and we know that Christmas is a hugely important time for many of our customers and, after last year’s events, that is truer now than ever.

“We set out to create a campaign which took a light-hearted view on how the nation is feeling and it has been well-received by colleagues and customers.

“We are still in the midst of a pandemic and the advert reflects the current rules and regulations regarding international travel.”