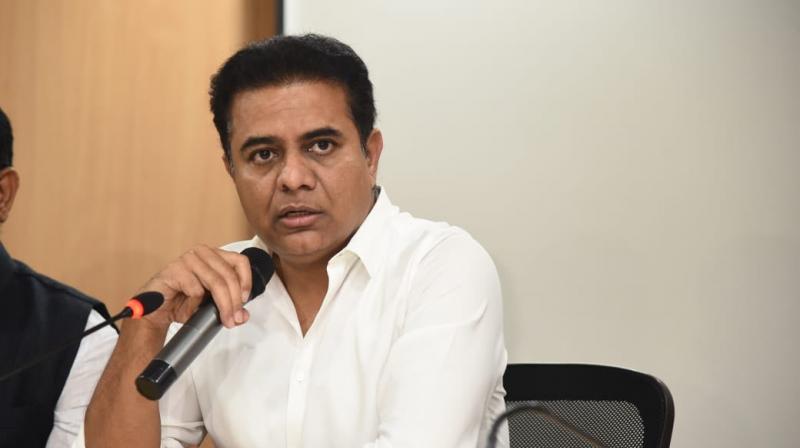 HYDERABAD: Minister for IT and industries, K.T. Rama Rao on Monday urged the Centre to extend more cooperation to progressive states like Telangana to become economically stronger. He said this will automatically contribute to the speedy development of the country.

Rama Rao, along with finance minister T. Harish Rao took part in the meeting convened by union finance minister Nirmala Sithraman with Chief Ministers and finance ministers of all states in virtual mode to discuss measures to attract private investments to boost the economy.

He sought an increase in FRBM limit by an additional 2 per cent to enable states to borrow more to raise funds for various development activities. Rama Rao said despite being the youngest state in the country, Telangana emerged as one of the top-4 states in the country which were higher GDP to the nation.

"Telangana's population is just 2.5 per cent of India's population. But it contributes 5 per cent to India's GDP. Telangana GDP has doubled within seven years of formation of state. The per capita income of Telangana was Rs 1.24 lakh at the time of formation, which increased to Rs 2.37 lakh now. The GSDP of Telangana increased from Rs 5 lakh crore to Rs 9.80 lakh crore," Rama Rao stated.

Rao opined that there was unhealthy competition among states at present to attract investments. He urged the Centre to extend cooperation to states to enable them to compete at international level in economic development. He sought more funds to states through tax devolution. He also expressed concern over imposition of cess in various forms by the Centre due to which the states are deprived of their justifiable share in tax devolution.

Rama Rao reminded that the percentage of cess in the Centre's tax earnings was just 2.3 per cent in 1980 which had now increased to 20 per cent. He urged union finance minister to release the arrears to Telangana which were promised in the AP Reorganisation Act, 2014.

He also sought early release of special grants to Telangana recommended by the 15th Finance Commission.