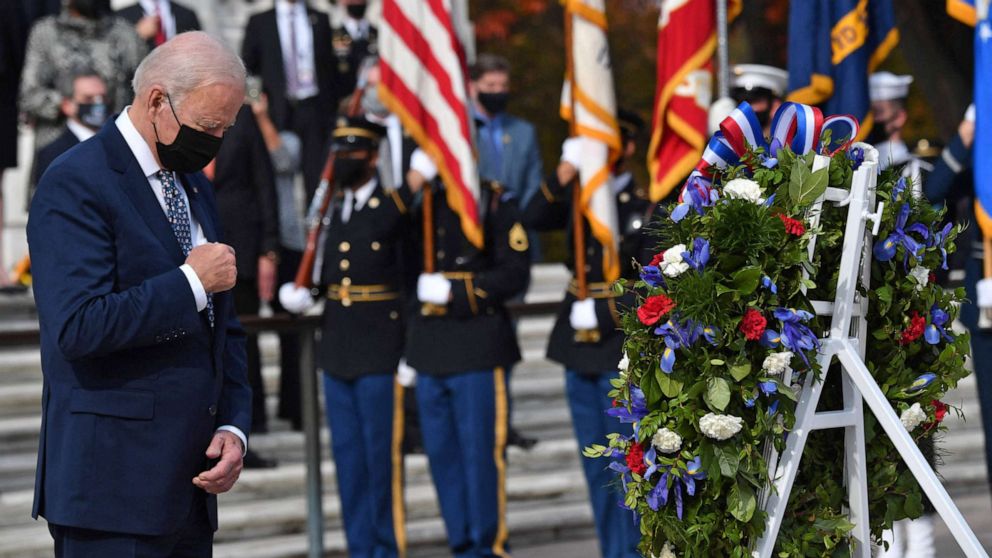 President Joe Biden observed his first Veterans Day as commander in chief with remarks at the Tomb of the Unknown Soldier at Arlington National Cemetary and said it was “the single greatest honor” he’s been afforded as president to stand before veterans and Medal of Honor recipients to speak about Veterans Day.

“Today we pay homage to the unrelenting bravery and dedication that distinguishes all of those who earned the title of ‘American Veteran,'” Biden said to the crowd of observers.

“Each of our veterans is a link in a proud chain of patriots that have stood in the defense of our country — from Bunker Hill to Bellow Woods, Gettysburg to Iwo Jima, Chosin Reservoir to Kunar Valley — each understood the price of freedom, and each shouldered that burden on our behalf,” he said.

The president acknowledged that Thursday marks the first time in 20 years that the U.S. is not at war for the holiday honoring troops.

“For two decades, the lives of our service members and their families and veterans have been shaped by the conflicts in Afghanistan. Since 9/11, hundreds of thousands of Americans have served. So many are still serving in harm’s way. We cannot forget them,” he said.

Biden then pulled out of his suit jacket pocket his daily schedule and said, as he has in speeches before, that he keeps on the back of it an updated list from the Defense Department of the number of American troops killed and wounded in the wars in Afghanistan and Iraq.

He said that Americans are “forever grateful” for what veterans have accomplished, but that in fulfilling their missions, “so many veterans and their families and caregivers have been through hell.”

“I have gotten in trouble way back when I was young senator for saying we only have one truly sacred obligation. We have many obligations, but one truly sacred obligation — to properly prepare those and equip those that we send into harm’s way that we care for them and their families when they are deployed and when they return home in is a lifetime sacred commitment. It never expires. And for me and for Jill and for the entire Biden family it is personal.”

Striking an intimate tone, Biden spoke of his late son, Beau, whom he has said in the past he suspects had exposure to “burn pits” overseas which contributed to his death. Biden took action on that health issue Thursday.

“I want you to know that our administration will meet the sacred obligation that we owe you,” he said. “We’re going to work with Congress — Republicans and Democrats together — to make sure our veterans receive the world-class benefits that they’ve earned.”

The Biden administration announced earlier that it is establishing a new policy for U.S. veterans who have been exposed to toxic “burn pits” during their service overseas. The Veterans Administration will now “create presumptions of exposure … when the evidence of an environmental exposure and the associated health risks are strong in the aggregate but hard to prove on an individual basis,” according to the White House.

Biden said officials will keep pushing on this front to also ensure mental health care is prioritized for the “invisible wounds” of veterans, women and LGBTQ+ service members

“I want to say clearly to all our veterans, if you’re struggling — you’re so used to never asking for anything — if you’re struggling, reach out,” Biden added. “Call the Veterans Crisis Line if you’re having trouble, thinking about things. It’s no different than if you had a wound in your arm.”

To address the ongoing COVID-19 response, he reminded that the American Rescue Plan passed earlier this year set aside $17 billion for the VA, and looking ahead to a post-pandemic world, Biden said his administration will continue efforts to keep veterans’ needs “front and center,” including on housing, VA facility improvements and retraining those that have lost their jobs.

Ahead of his remarks, as is tradition, the president participated in a full honor wreath-laying ceremony. Biden bowed his head and made the sign of the cross when he approached the wreath before the Tomb of the Unknown Soldier.

To mark the tomb’s centennial this week — dedicated to commemorate the final resting place of an unknown soldier from World War I, interred on Armistice Day, Nov. 11, 1921 — members of the public were given a rare chance to come close to it and lay flowers for the first time since 1948.

Also in attendance for Biden’s remarks were several veterans and their families, whom the president met with privately ahead of the ceremony at the White House.