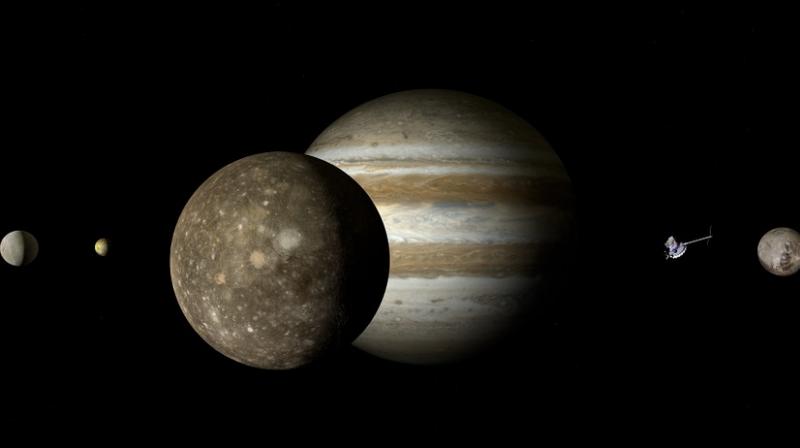 Bengaluru: The exoplanet search and study group at the Ahmedabad-based Physical Research Laboratory (PRL), has discovered a new exoplanet orbiting too close to an evolved or aging star with a mass of 1.5 times that of Sun and located 725 light years away, according to Indian Space Research Organisation.

This discovery was made using PRL Advanced Radial-velocity Abu-sky Search (PARAS) optical fiber-fed spectrograph, the first of its kind in India, on the 1.2 metre Telescope of PRL at its Mt. Abu Observatory, the Bengaluru-headquartered space agency said in a statement.

Using PARAS, which has the capability to measure mass of an exoplanet, the exoplanet's mass is found to be 70 per cent and size about 1.4 times that of the Jupiter, it said.

These measurements were carried out between December 2020 and March 2021. Further follow-up measurements were also obtained from TCES spectrograph from Germany in April 2021, and also independent photometric observations from the PRL's 43-cm telescope at Mt. Abu.

The discovery team led by Prof. Abhijit Chakraborty, includes students and team members, and international collaborators from Europe and the US.

This newly discovered star-planet system is very unique — the planet orbits the host star in just 3.2 days, thus placing it very-very close to the star at a distance of 0.05 AU (roughly one tenth the distance between Sun and Mercury).There are less than 10 such close-in systems known among the zoo of exoplanets known so far.

Because of the close proximity of the planet to its host star, it is extremely heated with a surface temperature reaching up to 2000 K, and hence an inflated radius, making it one of the lowest density planets known (density of 0.31 gram per cc), it was noted.

Such close-in exoplanets around stars (with distance less than 0.1 AU) with masses between 0.25 to a few Jupiter mass are called "Hot-Jupiters".

"The detection of such system enhances our understanding of various mechanisms responsible for inflation in hot-Jupiters and the formation and evolution of planetary systems around evolving and aging stars", ISRO said.

This is the second exoplanet discovered by PRL (an autonomous unit of the Department of Space) scientists using PARAS at 1.2 m Mt. Abu telescope; the first exoplanet K2-236b, a sub-Saturn size at 600 light-years away, was discovered in 2018.

How to prevent another grim pandemic winter