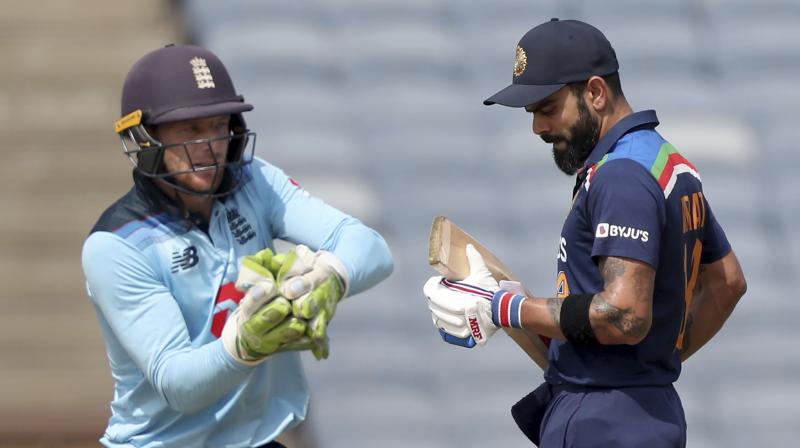 Melbourne: Bracing up for the Ashes, influential England player Jos Buttler is drawing inspiration from the "totally fearless" approach, which the flamboyant Rishabh Pant had adopted during the Indian team's last tour of Australia.

The 24-year-old Pant played two of his greatest knocks in Sydney and Brisbane in the last two Tests, as an injury-ravaged Indian team recorded an incredible come-from-behind Test series triumph.

"One player I really enjoyed seeing play Tests in Australia was Rishabh Pant when they won there last winter. I love the way he can change his game between the defensive side and aggressive sides, and be totally fearless," Buttler wrote in his column for the Daily Telegraph.

"For any wicket-keeper who likes to be more positive, Rishabh is a good guy to watch  his mindset and commitment to his game plans, whether he's attacking or defending."

Pant was the leading run-scorer in India's 2-1 win over Australia, scoring 274 runs in five innings at an average of 68.50.

Buttler reached Australia along with other members of England team for the Ashes. After two weeks of mandatory quarantine, he will gear up for the five-match series starting from December 8 in Brisbane.

Known for his free-flowing batting, Buttler said that it will be important to adapt to the conditions during practice sessions as it is the first time he will be playing red-ball cricket in Australia.

"I've played one-day and T20 cricket in Australia but I've not played any red-ball cricket. So, it'll be important, during the preparation phase in the nets and the warm-ups games, to try and understand conditions and work out what shots to play, how much the ball seams or swings and adapting to conditions.

"I don't want to go to Australia with too many preconceived ideas."

He termed the upcoming contests against England's traditional rivals as the biggest challenge in his career. The Ashes begins in Brisbane on December 8.

"… Australia is a place where lots of our guys have played in the Big Bash. The pace on the ball and the good wickets certainly suit a lot of players in our team. It will probably be the biggest challenge I've ever had in my career.

"Australia is the one tour that, as an English player, you want to experience, and it's something to really relish and enjoy  even though it'll be different without the travelling support. We're expecting an intense atmosphere with grounds full of Australian fans," Buttler said.

The 31-year-old cricketer, who aggregated 269 runs at an average of 89.66 in the T20 World Cup, added that he will try to continue in the same vein during the Ashes.

"I'll be trying to take the same sort of fearless attitude I've had in the T20 World Cup into my red ball batting. That doesn't just mean all out attack. But it's taking away the worries about too many things  keep the game very simple and looking to put bat to ball."