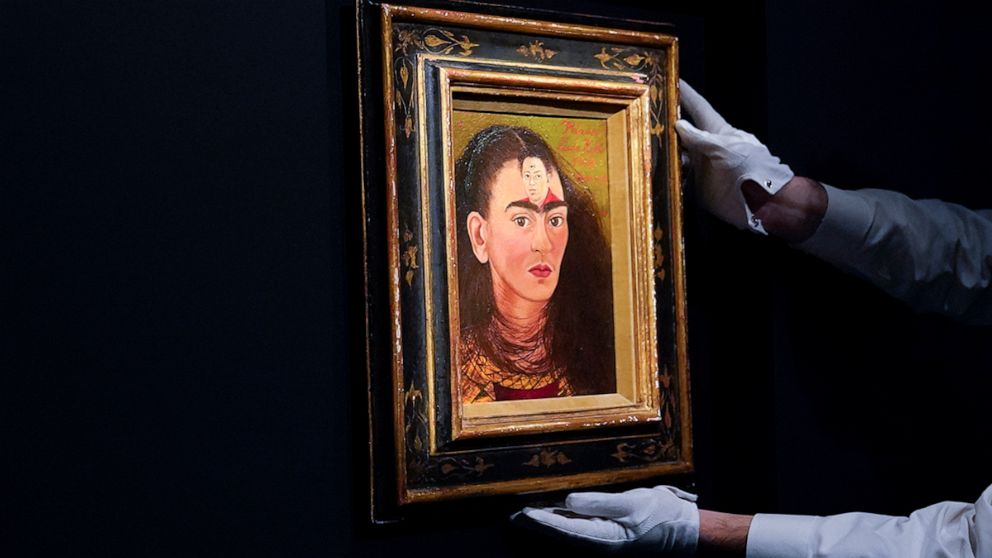 A self-portrait by the Mexican artist Frida Kahlo was sold for almost $35 million, including fees, at a Sotheby’s auction in New York on Tuesday.

This portrait, titled ‘Diego y yo’ (Diego and me), had been part of a private collection for almost 30 years.

Frida Kahlo was married to Mexican artist Diego Rivera, who previously held the record for the most expensive artwork from Latin America. Rivera’s ‘The Rivals,’ was sold for $9.76 million in a 2019 auction.

During her lifetime, the Mexican artist was never able to make a living through her paintings, and only had two gallery shows while she was still alive, Ankori said.

The 1949 self-portrait — described by Sotheby’s as a “masterpiece” — depicts the artist gazing at the viewer, with a small portrait of Diego Rivera seen in her forehead as a “third eye.” ‘Diego y yo’ was painted during the same year as Kahlo’s then-husband Rivera started an alleged extramarital affair with actress Maria Felix.

“This painting is very similar and dissimilar to Frida Kahlo’s work during this decade,” Ankori said. It was not the only painting with Rivera seen on her forehead, but “the expression of such raw emotion and grief — seen in the loose swirling hair that almost strangles her and is uncontained by the picture frame, the facial features and the tears — are unique,” Ankori said.

The same painting was sold for the first time in 1990 at Sotheby’s for $1.43 million by a New York collector, the art broker said. Before that,’ Diego y yo’ was owned by a friend of the Mexican couple.

“You could call tonight’s result the ultimate revenge, but in fact, it is the ultimate validation of Kahlo’s extraordinary talent and global appeal,” Anna Di Stasi, Sotheby’s director for Latin American Art, said in a press release.

Costantini, 75, is also the founder of the MALBA, the Latin American Art Museum in Buenos Aires.