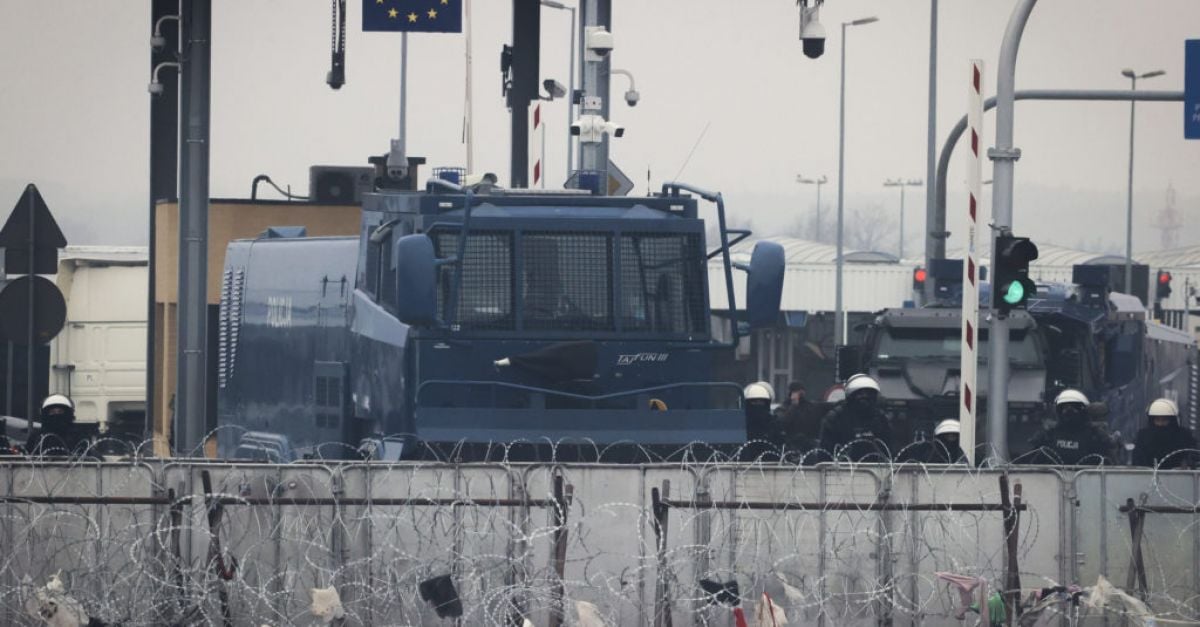 Poland’s president said there was “no military threat” at the European Union’s border with Belarus, where thousands of migrants watched over by Belarusian forces are pressing to cross into the bloc and where Poland has deployed troops in rear areas.

President Andrzej Duda said Poland was primarily using civilian police and border guards to meet its obligation to protect the EU’s eastern border from the pressure of “illegal migration”.

The presence of the Polish military there was chiefly a backup, he said on a visit to Montenegro.

Earlier on Wednesday, a Polish government official said migrants camped on the Belarusian side were being taken away by bus, suggesting the tense standoff could be easing.

Poland’s Border Guard posted a video on Twitter showing migrants with bags and backpacks being directed away from the border by Belarus forces.

Maciej Wasik, a Polish deputy interior minister, said he had received information that migrants were boarding buses provided by Belarus and leaving the area.

But Border Guard spokeswoman, Anna Michalska, said some of the migrants were seen taking wooden logs with them, raising questions about whether they might be moved to another spot along the frontier.

A large group of people from the Middle East have been stuck by a border crossing with Poland since November 8, waiting and hoping to enter Europe. Most are fleeing conflict or despair at home and aim to reach Germany or other western European countries.

The West has accused Belarusian president Alexander Lukashenko of using the migrants as pawns to destabilise the 27-nation bloc in retaliation for its sanctions on his authoritarian regime. Belarus denies orchestrating the crisis.

Mr Duda stressed that Poland would not accept any international decisions regarding solutions for the border standoff that were taken without Poland’s participation.

The Polish president was referring to recent talks between Germany’s outgoing chancellor Angela Merkel and Belarus’ authoritarian leader Mr Lukashenko, whose authority is questioned by the West.

German government spokesman Steffen Seibert pointed to the plight of the migrants brought to the border by Belarus and stranded there.

In order to improve the humanitarian situation, he said, “it makes sense to also talk to those who have the opportunity to change this situation in Minsk, even when it comes to a ruler whose legitimacy, like all other European member states, Germany does not recognise”.

Mr Seibert said United Nations aid was beginning to reach migrants on the border and it was important to ensure humanitarian agencies gained permanent access.

Tensions spiked on Tuesday when Polish forces at the border used water cannon and tear gas against stone-throwing migrants.

Warsaw accused Mr Lukashenko’s regime of giving smoke grenades and other weapons to those trying to cross the frontier.

But on Wednesday, Polish authorities said the situation had calmed down, and while they registered 161 attempts to cross Poland’s border illegally, the large migrant camp by the Kuznica crossing – which is now closed – had fewer people.

The information provided by officials is hard to verify due to restrictions journalists face in working on both sides of the border. A state of emergency in Poland is keeping journalists, human rights workers and others away from the border along a zone that is two miles (3km) deep.

A spokesman for the German interior ministry denied rumours that Berlin was planning to pick up the migrants and take them to Germany.

Steve Alter said the current developments showed that the “road to Belarus is a dead end for most people who want to go to Germany. There are no plans to approve taking people in”.

Estonia, also affected by migrant movement but to a much lesser degree, said it would build a temporary razor-wire barrier up to 25 miles (40km) long on its eastern border with Russia as a temporary solution to ensure border security.

This northernmost of the three Baltic states, with a population of 1.3 million, shares a 183-mile (294km) land border with Russia and a 211-mile (340km) border with Latvia but has no border with Belarus.

Iraq has been appealing for its citizens to fly home, telling them the way into the EU is closed. The first flights are scheduled for Thursday.

The Belarusian state news agency Belta reported that migrants were being given shelter inside a logistics centre at the border, giving them the chance after many days to sleep indoors rather than in tents outdoors.