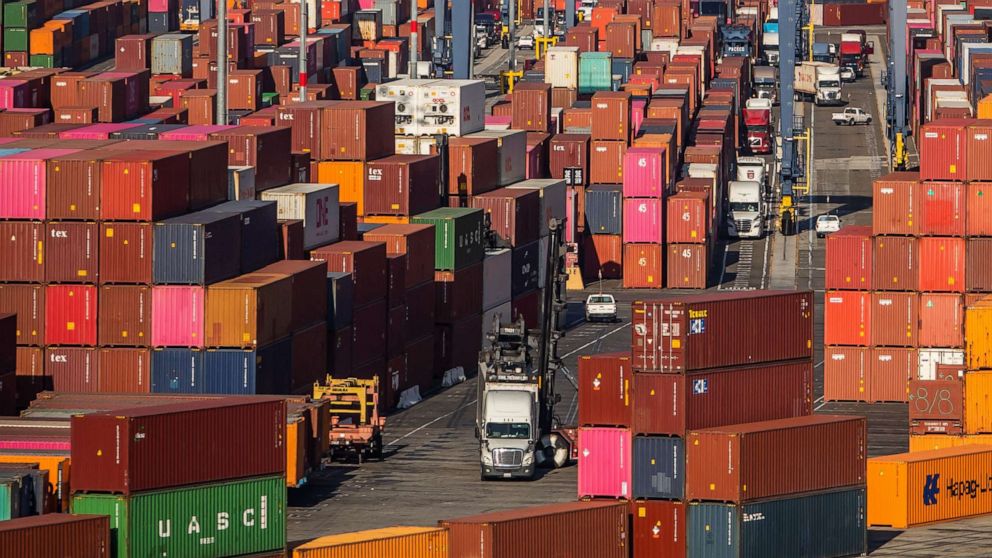 Walmart, Target and Macy’s say they are finding ways to bring products to shelves in time for the holiday season even though supply chain issues are still impacting the economy and other companies.

All three companies boasted strong numbers and good sales in their respective third quarter earnings calls this week. The news comes at a time when some U.S. ports are still congested and warehouses are stuffed to the brim.

There are signs of progress, with imports down about 25% at the port of Los Angeles, the port’s executive director, Gene Seroka, said Tuesday. However, there are still tens of thousands of empty cargo containers that need to be moved from the port, continuing delays.

The remaining vessels in port are mostly smaller and belong to a mix of retailers both large and small, Phillip Sanfield, director of media relations for the Port of LA, told ABC News.

The Biden administration last month announced that the port would begin running 24 hours a day, but that has yet to happen. Nevertheless, big retailers are predicting a successful holiday season.

“The holiday season is here, and we’re ready,” said Walmart CEO Doug McMillon. “We continue to have momentum. Sales were strong throughout the third quarter and we’ve seen a good start to the fourth quarter.”

Walmart said that its U.S. inventory is up 11.5% ahead of the holiday season as it was able to meet customer demand. Similar sentiments were echoed by Macy’s, as the company also discussed its response to the ongoing logistics crisis.

“We don’t expect to be materially impacted by supply chain issues during the critical holiday shopping season,” Jeffrey Gennette, Macy’s CEO, said on an earnings call this week.

How are they doing it?

These retailers seem to be side-stepping supply chain woes by rerouting ships to less-used ports, hiring new workers, unloading cargo during off-hours and switching to airfreight in some cases.

“We’re adding more than 30,000 permanent positions across our supply chain network to support the growth we expect to continue delivering in the fourth quarter and beyond,” said Brian Cornell, chairman and CEO of Target. “The team continues to work around significant port delays, diverting shipments to less-congested entry points and relying on airfreight in certain cases.”

Walmart is also rerouting deliveries; the company is adding extra lead times to orders and chartering their own ships.

These companies may be outrunning supply chain issues, but experts say that’s because they can afford the extra cost.

“I think that just with all the disruption that we’ve had, we’ve realized how quickly we can pivot and come up with new solutions. Sometimes those new solutions are expensive,” said Brandon Isner, head of retail research at CBRE, an American commercial real estate services and investment firm. “It’s true that bigger, mass-market retailers, they’re using their clout with carriers and suppliers to acquire as much product as possible in advance of the holiday season.”

Can other companies manage to do the same?

Many of these solutions, according to Isner, are too expensive and not cost-effective for smaller businesses. The options for creating a new supply chain from producer to consumer becomes easier as pockets get deeper and economies of scale get larger.

“They [larger retailers] have the ability to reroute profits to make sure they get delivery where smaller institutions don’t necessarily have that type of logistics capabilities,” said Steven Ricchiuto, U.S. economist for bank-holding company Mizuho.

In one example, Ricchiuto said a large retailer may opt to transport their items differently to avoid supply chain clogs.

“Typically putting freight on airplanes is more expensive than putting it on boats,” said Ricchiuto. “But in an environment in which you are restricted on one side of the equation and prices have gone up enough, suddenly it becomes more realistic to go the more expensive route.”

Could inflation help the supply chain?

All of this comes at a time when the U.S. economy is experiencing abnormal levels of inflation — the highest in 30 years.

“I do think that these production issues are getting themselves worked out, in part because of higher prices,” said Gus Faucher, the chief economist of PNC Financial Services. “Higher prices give businesses an incentive to sell more to consumers, so not only do they have higher values for volumes, but they’re getting more for their services and goods that they sell.”

Higher prices due to inflation may seem like an unlikely savior in fixing supply chain issues, but the rising costs present challenges as well.

“The cost of their workforce is up, the costs of getting products there is up, energy costs are up,” said Isner. “Some retail executives say that, ‘Yes, they’re definitely going to pass costs onto the consumers,’ but others have said, ‘No, they’re just going to eat the costs.’ … We can probably make an educated guess that it’s the larger companies.”

For retail shoppers and American families, all of this signals a warm welcome to the holiday season, according to the Biden administration.

“In short, families have seen an increase in real disposable income, and stores and restaurants have the supplies to drive this recovery,” Brian Deese, the director of the White House’s National Economic Council, said Tuesday.

“Today’s data show that even as we work to address the real challenge that elevated inflation from supply chain bottlenecks poses from Americans’ pocketbooks and outlook, the economy is making progress,” Deese said in response to Walmart’s successful third quarter and forecast for the holiday season.

Economists say the American supply chain could look different once the country emerges from the pandemic in a growing economy. Even though prices are more stable at larger retailers, there could be a rise across the board as the economy continues to heat up.