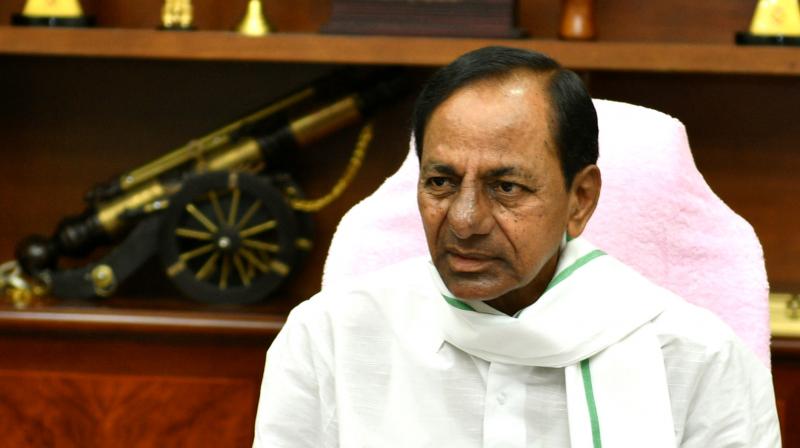 Hyderabad: Telangana Chief Minister K Chandrasekhar Rao, his cabinet colleagues and other TRS leaders held a dharna here on Thursday in protest against the NDA government's alleged anti-farmer attitude and unhelpful stance over paddy procurement in the state.

"We started this battle because our farming community may suffer due to the Centre's policies, and as the Central Government of the day is showing reluctance, negligence towards farmers and agriculture," Rao said.

"We say you change your attitude, come to the rescue of farmers, withdraw the autocratic farm laws and change the policy to instal metres at agriculture pump sets. This battle is not going to end today and we have to fight till the end," he said, addressing the gathering at Dharna Chowk here.

The fight will have to be intensified in the future, till the interests of Telangana farmers are safeguarded, by combining forces with the "struggle of the farming community in north India," he said.

Though he urged the Union Minister for Food and Public Distribution Piyush Goyal 50 days ago to inform the target for procurement of paddy from the state, there has been no response from the Centre, he alleged.

He said he has written a letter to Prime Minister Narendra Modi on Wednesday (urging the Centre to direct the FCI to confirm the target of rice procurement from the state during ensuing Rabi season, among others).

"We will continue our fight till Centre does justice to our farming community," he said.

Saying that the TRS was criticised by BJP when it held dharnas recently on the paddy procurement issue, for holding protests despite being in power, Rao said Modi, as Gujarat Chief Minister, held a protest for 51 hours in 2006.

"A message is going out from this that pitiable circumstances of CMs, Ministers and MLAs having to sit on dharna prevail in this country," he said.

The dharna by Rao and other TRS leaders came against the backdrop of a war of words between ruling TRS and BJP over paddy procurement and a clash between the activists of the two parties during state BJP president and MP Bandi Sanjay Kumar's visit to procurement centres this week.

Sanjay Kumar on Wednesday alleged that the state government did not start procurement of the rainy season crop which made farmers wait at procurement centres since the Dussera festival.

Farmers would not have died of heart attack at procurement centres or committed suicides had the government started procurement properly," he claimed.