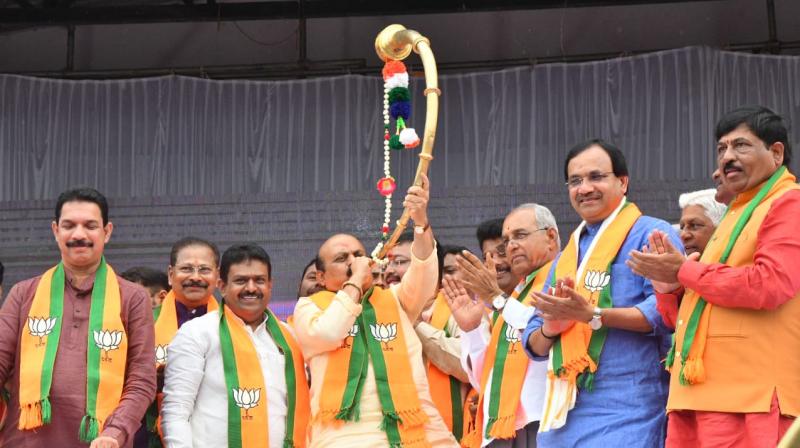 Bengaluru: The ruling BJP will announce its list of candidates for the December 10 biennial election to the Karnataka Legislative Council by November 19, Chief Minister Basawaraj Bommai said on Thursday, as the party began its ' Janaswaraj Yatre' in different parts of the state, in the run-up to the polls.

The BJP has planned to hold 'Janaswaraj Yatre' across the state from November 18 to 21 in four teams.

"We are beginning Janaswaraj Yatre in four teams under the leadership of our senior leaders B S Yediyurappa, Jagadish Shettar, K S Eshwarappa and party state president Nalin Kumar Kateel. They will travel across the state, meet elected representatives and seek support for the party candidates for the upcoming legislative council polls," Bommai said.

Speaking to reporters here, he said the process of finalizing candidates for the MLC polls is in the final stages and it will be announced today or tomorrow.

"We have sent the list of probable candidates to the high command other than for two districts, by this evening or tomorrow the list will be approved and announced," he said.

The biennial election to the Karnataka Legislative Council from 20 Local Authorities' Constituencies for 25 seats, due to retirement of sitting members, will be held on December 10.

Later speaking to media in Koppal, the CM said other than the council poll preparations, the Yatre is also aimed at strengthening the organization.

According to party sources, the Yatre will focus on strengthening the organistion, also keeping in mind the upcoming zilla and taluk panchayat polls and 2023 assembly polls.

Bommai who participated in the Yatre today at Koppal, will be part of its conclusion in Kodagu.

Ahead of participating in the Yatre as part of which he will be travelling across eight districts, former Chief Minister Yediyurappa in Hubballi said the party is confident of winning maximum number of seats in the council polls and expects to gain majority in the House.

The election is necessitated as the term of office of the 25 MLCs is going to end on January 5, 2022.

While the election notification was issued on November 16, the last date for filing nomination papers is November 23, and scrutiny will take place on the next day.

Last date for withdrawal of candidature is November 26, and the counting of votes will take place on December 14.

The elections is being held for two seats each from the local authorities constituencies of Bijapur, Belgaum, Dharwad, Dakshina Kannada and Mysuru; and one each from Bidar, Gulbarga, Uttara Kannada, Raichur, Bellary, Chitradurga, Shivamogga, Chikmagalur, Hassan, Tumakuru, Mandya, Bangalore, Bangalore Rural, Kolar and Kodagu.