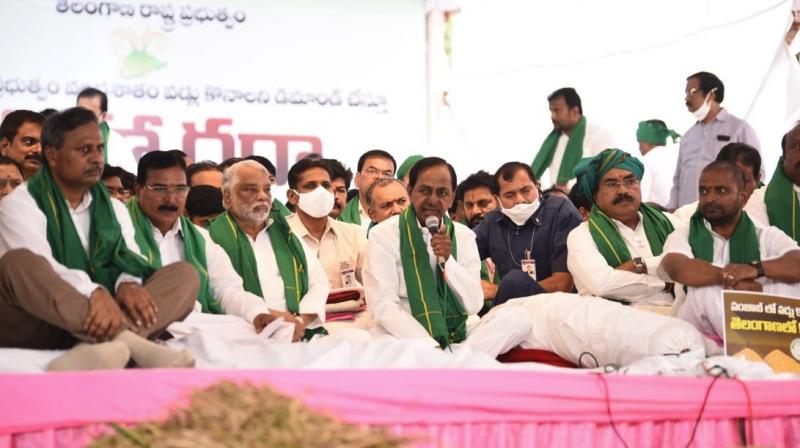 Hyderabad: The Centre on Thursday reiterated its limitations in procuring paddy and boiled rice even as Telangana Chief Minister Chandrasekhar Rao staged a Maha Dharna in the city demanding that the Centre procure 90 per cent of the paddy grown in the state.

A note, circulated informally by the Union Ministry of Food and Public Distribution, also talked of excess production of rice across the country, the difficulties in inter-state movement of boiled rice and its request to states to limit supply of boiled rice to the national pool.

Significantly, the contents gave enormous weight to Chief Minister Rao’s own appeal to farmers in the past to switch over from paddy to alternative crops and avoid the repeat of dreadful days when several farmers committed suicide due to lack of remunerative prices and indebtedness.

The CM had taken strong objection to state BJP president Bandi Sanjay giving a call to farmers to raise paddy only and pressurise the state government to procure the same.

According to the note, currently par-boiled rice stock available with the Food Corporation of India was 46.28 lakh metric tonnes and 32.73 lakh mt was yet to be received. Thus, the total stock of par-boiled rice would be about 79 lakh mt against the total annual consumption of 20  lakh mt. It will take four years to use up the current stocks, the Centre pointed out.

The Centre had also enhanced the expected output from Telangana for 2021-2022 from the initial estimate of 54 lakh metric tonnes to 75 lakh mt, as per the data received from the Mahalnobis National Crop Forecast Centre.

The chief minister and Sanjay were at loggerheads on the expected production in the state with the former claiming 145 lakh mt and demanding that the Centre increase procurement from the current 40 lakh mt to 90 lakh mt.

The note also said the Centre had been considering the request of Telangana to enhance the procurement quota.

The Centre, however, clarified that it had been increasing the procurement from Telangana every year, with 35 lakh MT being procured in 2016 to 94 lakh MT in 2020-2021.