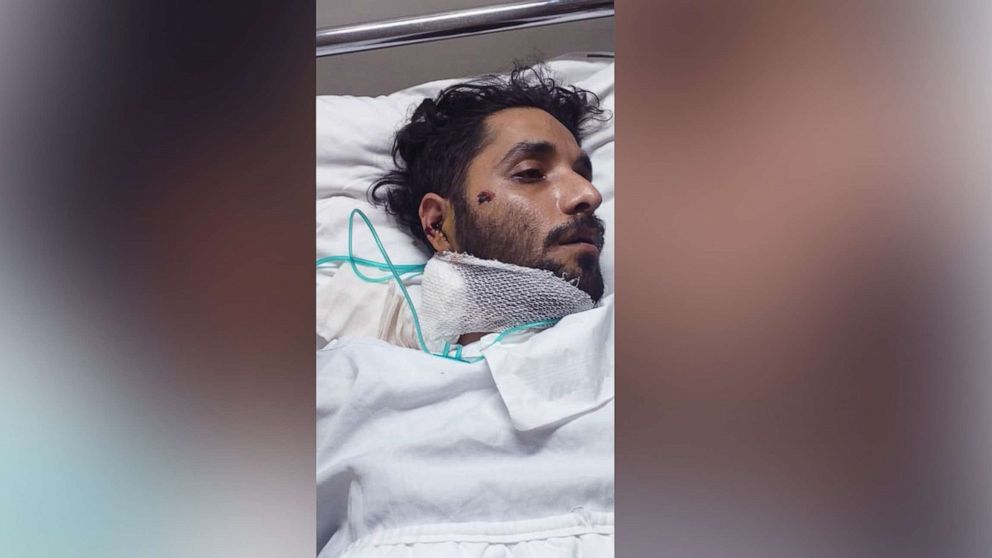 Mahyar Ebrahimi says he feels like he has nothing else to lose.

That’s why he says is speaking out now — saying he’s doing so even though he believes he’s putting his and his family’s lives at risk by defying the Iranian government. He says its officials are responsible not just for the gunshot wound that has robbed him of hearing in one ear and brought a mountain of medical bills, but also for two years of harassment that have chased away loved ones and kept him from finding work.

“I am a human being, and I have the right to live,” said the 31-year old Iranian. “My family and I have endured a lot of pressure, and after two years, I am breaking my silence with the hope that with the help of you, dear people, I would be able to pursue my human rights.”

Ebrahimi says he is one of countless Iranians believed to have been injured in mass protests across the country two years ago this week — countless because official statistics are so hard to come by in Iran.

Now, on the two-year anniversary of those protests and the bloody crackdown against them, Iran finds itself facing many of the same economic and political challenges. It’s a powder keg that could kick off a new wave of demonstrations, according to some analysts.

But with little accountability for those injured and killed in November 2019, the response could be as brutal. Ebrahim Raisi, Iran’s new president who is a more hardline cleric and close to Supreme Leader Ayatollah Khamenei, was judiciary chief at the time of the protests, as thousands of Iranians were jailed and more than 300 were killed, according to human rights monitors.

“The Iranian leadership has demonstrated it will not allow accountability for unlawful state actions,” said Hadi Ghaemi, executive director of the Center for Human Rights in Iran, a U.S.-based advocacy group. “It is up to the international community to avoid distraction and expediency and defend the rights of people of Iran.”

It’s the international community to which Mahyar Ebrahimi is appealing. He filed a complaint with the United Nations Human Rights Council that was shared with ABC News by Ghaemi’s group. The U.N. body’s complaint procedure allows individuals, groups, or non-governmental organizations who are victims of a government’s human rights abuses to seek help, particularly when their own government refuses to act or is responsible.

“During the past two years, I didn’t file any complaints with the [Iranian] judiciary because I was afraid of this regime. I was afraid that they would threaten my life and my family or hurt them and throw them in jail,” Ebrahimi told the U.N.

That fear is born of his painful experience. Ebrahimi was 29 years old, working in construction in the working-class town Andisheh outside Tehran, when he says he joined thousands of others across the country protesting a steep climb in gas prices. From that pocketbook issue, demonstrations grew larger in size and scope to express greater discontent about stagnant wages, an economic slump, and, for some, the government’s adventuristic and expensive foreign policy.

Some of the largest and most widespread protests in Iran in decades, the demonstrations were met with a brutal response, including aggressive security forces and a 10-day long internet shutdown, meant to choke the political support for protests as they spread like fire across the country.

That violent crackdown made Ebrahimi’s family nervous about him marching, but Ebrahimi says he joined on Nov. 16 — the second day of protests. After some volatility that day, he mostly stayed home on Nov. 17, but he said he was “tormented” following media coverage on television. He said he rejoined demonstrators that night — when everything would change for him.

He said he joined a crowd chanting slogans as they again approached a local office of the Basij, a paramilitary group in Iran’s Islamic Revolutionary Guard Corps known for brutal crackdowns across the country.

As the crowd shouted and agitated outside the Basij base, some of its members, this time armed and in body armor, fired shots into the air and deployed tear gas, according to Ebrahimi. He said he moved further along the street when a woman asked him to help her and her daughter cross through the chaos and return home.

After helping them, he crossed back across the street, he said, when a bullet ripped into his head — crossing his right cheek, blowing a hole through his right ear, and removing a chunk of flesh.

The Iranian government has denied using live ammunition against protesters. At the time, its leaders and spokespeople blamed “thugs” with ties to exiled critics or foreign adversaries like the U.S. for fomenting unrest — a charge the State Department denied.

But while Iranian officials downplayed the death toll, human rights groups have said hundreds were killed by lethal force. Amnesty International issued an updated report Thursday, documenting the killing of 323 men, women and children by security forces during the bloody crackdown that week in November 2019.

While protests were at times raucous or even destructive, Amnesty said in its report, virtually none of the demonstrators had weapons, and Iranian forces’ use of firearms was unwarranted and unlawful.

“There was overwhelming documentation and human rights reporting that shows the government was using live ammunition and targeting protests,” said Tara Sepehri Far, a researcher at Human Rights Watch, the monitoring group. She told ABC News in the majority of cases, victims were shot in the upper body close to the chest or neck — a sign they may be shooting to kill.

Protesters were killed in 37 cities in eight provinces across Iran, according to Amnesty. Poor and working-class communities were the heart of these protests, driven by socioeconomic inequalities, per Sepehri Far, and the impoverished suburbs around Tehran experienced the highest death toll — at least 163 recorded deaths, according to Amnesty.

After the shooting, Ebrahimi spent over a week fighting for his life in Milad Hospital, according to medical notes and bills reviewed by ABC News, treated for the gunshot wound to his right ear and neck. According to his statement, he demanded to be released after nearly two weeks there because his family could not afford the growing hospital bills — even going on hunger strike after doctors initially refused.

But once released, the pain in his ear, neck, and head intensified, he said, and doctors at Milad Hospital urged him to seek treatment. With money borrowed from other relatives, he said he went to Farabi Hospital for several procedures, including an eye operation — his right eye also impacted by the bullet.

As the medical bills climbed again, however, he had to halt treatments, he said. His family still owes their relatives money for the first few procedures.

Ebrahimi himself has been unable to contribute — unable to find work both because of his injuries and, he said, because authorities have harassed potential employers.

“For the past two years, I have been experiencing unbelievable pains, fears, and stress day and night. Because of what has happened to me and my physical condition, nobody anywhere will give me a job. All the people in my life have distanced themselves so that they wouldn’t get into trouble,” he said.

Beyond the loss of hearing in his right ear and the damage to his right eye, he’s now had worsening jaw and teeth issues and damaged nerves in half his face, he said.

While the government denied using live ammunition, many of the victims were pushed to take compensation and dropped their pursuit of charges or investigations, Sepehri Far said, adding, “There has basically been zero [accountability].”

But no one ever offered Ebrahimi help, according to the Center for Human Rights in Iran, whom Ebrahimi told, “They’re torturing me without touching me.”

The lack of accountability or justice is one of many issues driving agitation among the Iranian public. Raisi’s new government faces deteriorating economic conditions, U.S. and international sanctions, and decades of government mismanagement, most recently of the coronavirus pandemic, which have left Iranians “particularly agitated,” per Sepehri Far.

Raisi may move to shift economic policies, including government subsidies, which could light a new match.

“There will be many of those ahead, and those will all be points that could be perceived as sparks for new protests because the society is frustrated, and the economic reality is very harsh,” said Sepehri Far. “If Raisi cannot deliver, then I don’t think people will give him any more chance than they gave Rouhani.”

For now, there may be a wait-and-see period with Raisi’s new administration — and government oppression and poor economic conditions have made it increasingly difficult for protests to organize.

Instead, individuals like Ebrahimi are left to turn to the outside world to plea for help. This past week in London, Amnesty International launched a “people’s tribunal” — four days of witness testimony from dozens of victims, relatives, health care workers, former security officials and others.

“U.N. member states have yet to mandate an independent international inquiry into crimes under international law and serious human rights violations committed by the Iranian authorities during and in the aftermath of the November 2019 protests,” said Heba Morayef, Amnesty International’s Middle East and North Africa regional director. “There must be an end to this systematic impunity afforded to perpetrators of this state-sanctioned crackdown.”

But little action on the world stage — and even less in Iran — has left victims like Ebrahimi desperate, he said. While speaking out may put his and his family’s lives at risk, he said two years of pain and harassment have given him no other option.