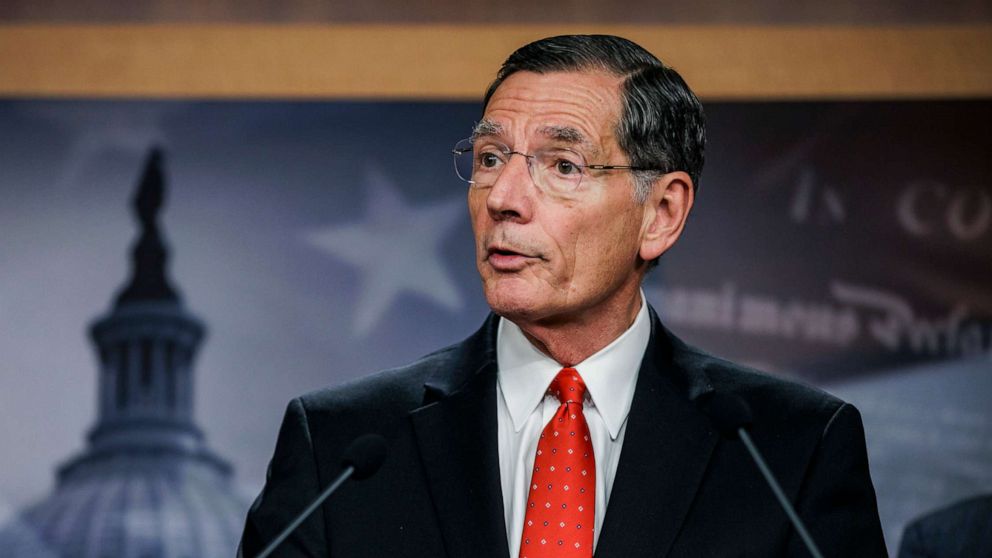 In an exclusive interview with ABC’s “This Week” on Sunday, anchor George Stephanopoulos brought up comments Trump made in an interview with ABC News’ Chief Washington Correspondent Jon Karl where the former president defended those who seemed to call for violence against Pence on Jan. 6 during the insurrection on the Capitol, chanting “hang Mike Pence.”

In the interview with Karl — which is detailed in his upcoming book, “Betrayal: The Final Act of the Trump Show” — Trump said he wasn’t worried about Pence’s safety and that he “thought he was well-protected.”

“The people were very angry,” Trump told Karl, who responded that the rioters were saying “hang Mike Pence.”

“Because it’s common sense — how can you — if you know a vote is fraudulent, right, how can you pass on a fraudulent vote to Congress?” Trump replied, repeating his baseless claims of election fraud.

Stephanopoulos played the audio of Trump’s interview with Karl for Barrasso and pressed, “Can your party tolerate a leader who defends murderous chants against his own vice president?”

The senator avoided the question, saying that “the Republican Party is incredibly united right now” and argued that “Trump brings lots of energy to the party.” Barrasso also pointed to the Virginia election of Republican Glenn Youngkin as governor — an upset that sounded the alarm for Democrats — and said Trump’s economic policies were better for the country.

“So you have no problem with the president saying, ‘hang Mike Pence is common sense’?” Stephanopoulos pushed.

“I was with Mike Pence in the Senate chamber during Jan. 6. And what happened was they quickly got Vice President Pence out of there, certainly a lot faster than they removed the senators,” Barrasso replied. “I believed he was safe the whole time. I didn’t hear any of those chants. I don’t believe that he did either.”

But Stephanopoulos pressed again: “Well, we just played the chants. I’m asking if you, if you believe — if you can tolerate the president saying, ‘hang Mike Pence is common sense.'”

“It’s — it’s not common sense,” Barrasso said, though he refused to criticize Trump for the comments when asked once more by Stephanopoulos.

“I don’t agree with President Trump on everything,” Barrasso said. “I agree with him on the policies that have brought us the best economy in our — my lifetime. And I’m going to continue to support those policies and continuing to work to stop what Joe Biden is doing to this country, which I believe is almost irreversibly bad.”

Earlier during the interview, Barrasso slammed the Biden administration, saying that it is “failing” as inflation reaches a 30-year high.

Inflation has risen by 6.2% compared to this time last year, according to data released by the Labor Department.

“The American people have given this president failing grades across the board on his first quarter report,” Barrasso said.

Even though President Joe Biden currently has a high disapproval rating, his ideas remain popular with the American public.

In a new ABC News/Washington Post poll out Sunday, Biden has an approval rating of 41%, with 70% of Americans saying that the economy is bad. But overall, 63% of American’s support the $1 trillion infrastructure bill and 58% support the $2 trillion dollar social spending bill.

Biden will sign the $1 trillion infrastructure bill into law on Monday, joined by a bipartisan group of members of Congress during a ceremony at the White House, according to a White House official. In total, 19 Republicans in the Senate and 13 Republicans in the House voted for the bill — many are now facing backlash and will not be present at the signing ceremony.

“No matter what bill the president happens to sign tomorrow, that’s not going to change the failing grades,” Barrasso said.

Barrasso also argued that Biden’s social spending bill will increase taxes on Americans and “add to inflation in 2022.”

“The tax increases are almost solely to millionaires, and the White House says that the Nobel laureates believe that it will not increase inflation,” Stephanopoulos countered, asking, “What evidence do you have that it will?

“The reason I think prices are going to go way up is because of some of the things that they have put into the bill on energy and on climate which are going to raise energy costs considerably in the year ahead, at a time when the American people are already paying sky-high prices to heat their homes, to drive their cars, to buy groceries and inflation as we know hurts the most vulnerable,” Barrasso replied.

The House is expected to vote on Biden’s social spending bill this week, National Economic Council Director Brian Deese told Stephanopoulos in an interview earlier in the show.

“We’re confident that this bill is going to come up in the House this week, that it will get a vote it will pass, and it will move on to the Senate,” he said.

Stephanopoulos also asked Barrasso about the bipartisan infrastructure bill — which the senator did not vote for.

Under the Infrastructure Investment and Jobs Act, Wyoming will receive $1.8 billion for federal-aid highway apportioned programs and $225 million for bridge replacement and repairs over five years, according to the White House.

Stephanopoulos pressed Barrasso on why he voted against a bill that would provide so many benefits to his state.

“Ultimately I voted against it because they did use a lot of budget gimmicks and they are adding $256 billion to the debt,” Barrasso said. “And then, of course, the big thing is they handcuffed this infrastructure bill to this big, massive tax and spending bill, which every Republican is united in our efforts to drive a stake through the heart of this effort.”