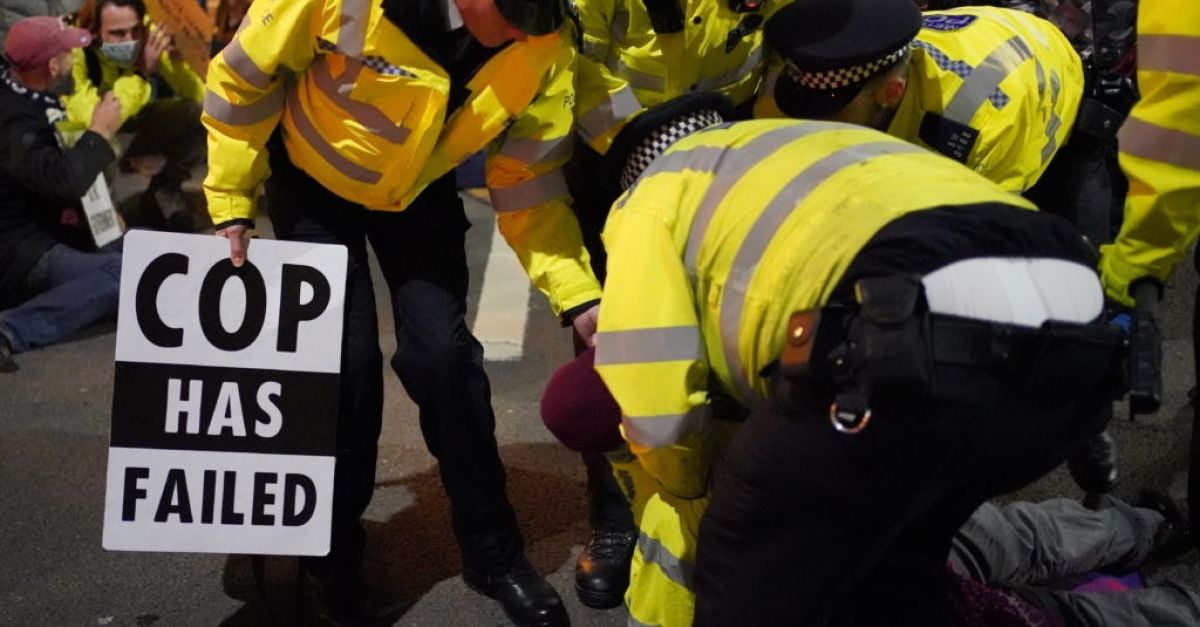 Police have arrested 30 climate activists after a major bridge in central London was blocked by a sit-down protest.

The arrests on Lambeth Bridge came after Public Order Act conditions were imposed on the protest, which had been held in support of nine Insulate Britain campaigners who were jailed this week.

The bridge had been shut down to traffic for a number of hours on Saturday by the sit-in, which initially involved up to 250 people who had marched from the UK Royal Courts of Justice.

UPDATE: #Lambeth Bridge has now been re-opened. 30 arrests were made for breach of S14 conditions. We continue to take action at #Vauxhall Cross to remove protestors.

Referring to Public Order Act conditions imposed on the protest, the Metropolitan Police said: “Lambeth Bridge has now been reopened, 30 arrests were made for breach of S14 conditions.”

The force also said that Vauxhall Cross, where some of the demonstrators had moved, had reopened.

Earlier, uniformed officers had stood on Lambeth Bridge as traffic was diverted, with the Metropolitan Police saying this was “for the safety of all”.

Cheers had broken out earlier as campaigners told the crowd that the nine jailed Insulate Britain climate activists are “political prisoners” and will not be the last to be locked up.

The nine protesters were jailed this week for breaching an injunction designed to prevent the road blockades which have sparked anger among motorists and others affected by the protests.

Extinction Rebellion later said Saturday’s sit-down protest was to break the injunction granted to National Highways, in solidarity with the at least 34 people who have broken these injunctions so far, including those who were jailed this week.

Gabriella Ditton, 27, an animator from Norwich, Norfolk, was among those who took part in the Saturday’s demonstration. She said she has been arrested six times with Insulate Britain, including once for breaking the injunction.

She said: “I expect to go to prison at some point for at least six months because I am not going to be apologetic about this.

“I have known for a couple of years that the only thing that is going to serve us is civil resistance. I have faith in people coming together.

“Solutions to this crisis exist, we just need the political will to do it.”

Zoe Cohen, 51, said she had travelled from her home in Warrington, Cheshire, to take part in the demonstration, because she is “angry, distraught and grieving for the huge amount of nature that we have already lost”.

She said that “ordinary people should not have to do this and risk prison” and added that “any disruption is microscopic to the suffering of millions of people who are dying now across the world due to this crisis”.

Insulate Britain began a wave of protests in September and supporters have blocked the M25, roads in London including around Parliament, roads in Birmingham and Manchester and around the Port of Dover in Kent.

In a warning directed to police at the protest, Gully Bujack said: “These streets are ours and we will put one foot in front of the other, and dare you to stop us.”

She added: “You can jail the resistor but not the resistance.”

The group, watched closely by uniformed officers, then set off towards Westminster, chanting “power to the people”.

Cheers rang out as one campaigner told the crowd that “good people have a duty to disobey bad laws”.

Insulate Britain said it was not involved with setting up the event, which was described by those who took part as community-led.

The nine protesters were sentenced at the High Court on Wednesday after they admitted breaching an injunction by taking part in a blockade at junction 25 of the M25 during the morning rush hour on October 8th.

Ben Taylor, 37, was given a longer sentence of six months “to deter (him) from committing further breaches”, after his submissions to the court on Tuesday were described by Dame Victoria Sharp as “inflammatory” and a “call to arms”.

The judge, sitting with Mr Justice Chamberlain, said there was no alternative to custodial sentences given that the group’s actions were so serious and they had made it clear they intended to further flout court orders.

Insulate Britain has said it intends to continue the protests until the Government agrees to insulate homes.

The High Court has so far issued five injunctions to prevent protesters from blocking roads. They include four injunctions granted to National Highways, banning demonstrations on the M25, around the Port of Dover and on major roads around London, and one to Transport for London (TfL).

TfL was granted a civil banning order aimed at preventing protesters from obstructing traffic on some of the capital’s busiest roads.

Those who breach the injunctions could be found in contempt of court and face a maximum penalty of two years in prison or an unlimited fine.

Further High Court committal proceedings are expected to be issued against other Insulate Britain protesters relating to protests on October 27th.