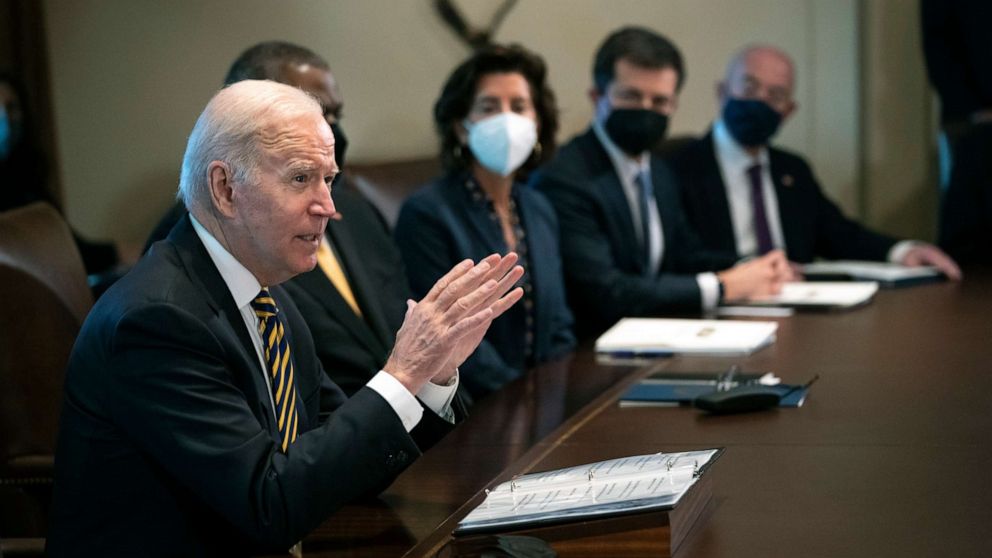 Monday afternoon brings the kind of event President Joe Biden promised — a bipartisan bill signing on a mammoth spending bill, on an issue his predecessor famously failed to deliver on.

It arrives, though, with brutal political realities setting in. The latest ABC News/Washington Post poll is filled with nightmarish data points for Democrats: 70% of voters saying the economy is in bad shape; a 41% approval rating for Biden that dips to 33 across eight Senate battlegrounds; a record-high 10-point GOP generic-ballot edge in hypothetical House races.

The president on Monday will cast the infrastructure law as a promise delivered. Yet less a third of voters say he’s keeping most of his campaign promises, and only 35% say he’s accomplished much overall.

These are the kinds of numbers that favorable scores from the Congressional Budget Office can’t turn around. Inflation is not so much a fear as a reality now, with all that means for perceptions and for the rest of the Biden agenda.

Democrats will continue to puzzle over how and why they are pushing broadly popular concepts but aren’t seeming to get much credit. Sixty-three percent of voters say they support the infrastructure plan, and 52% say they favor the social-spending agenda the House is aiming to pass this week — even with the poll including the estimated price tag for each.

It suggests there is room for Democrats to bounce back when the public understands the measures better, as Biden and rank-and-file members of Congress will now try to make happen.

But the reality could be more problematic for Biden and his party. They’ll need to turn around a sense that they’re trying to fix things that don’t seem to get to the most urgent concerns of the months ahead.

In a clear departure from the last administration, Biden’s Justice Department has signaled that indignant defiance of congressional subpoenas comes with consequences.

Steve Bannon, ex-adviser to former President Donald Trump, is expected to surrender and be arraigned in court Monday. He was indicted on two counts of contempt of Congress by a federal grand jury for his refusal to comply with the select committee’s probe of the attack at the Capitol.

“Steve Bannon’s indictment should send a clear message to anyone who thinks they can ignore the Select Committee or try to stonewall our investigation: No one is above the law. We will not hesitate to use the tools at our disposal to get the information we need,” Jan. 6 select committee chair Rep. Bennie Thompson, D-Miss., and vice chair Rep. Liz Cheney, R-Wyo., said in a statement.

In a statement, Trump denounced what he described as courts weaponized to “torment and destroy innocent people.”

Rep. Jim Jordan took to Twitter with a promise of retribution should the GOP take power in the House.

“Joe Biden has evicerated [sic] Executive Privilege,” Jordan tweeted. “There are a lot of Republicans eager to hear testimony from Ron Klain and Jake Sullivan when we take back the House.”

Despite Bannon’s apparent noncompliance, Trump and his loyalists, who otherwise claim to be ardent proponents of “law and order,” are crying foul. Each contempt count is punishable by up to a year behind bars and a six-figure fine.

The political arc linking former New Jersey Gov. Chris Christie and former President Donald Trump is in its latest evolution as both Republicans test the waters of 2024 campaign possibilities. Should the pair find themselves in another head-to-head primary matchup, the battle is likely to be just as pointed — and perhaps even more personal.

Despite being in Trump’s orbit throughout the former president’s term in the White House, Christie has since attempted to set himself apart from other potential 2024 hopefuls by urging Republicans to stop relitigating the 2020 election and instead focusing on rallying against the policies put forth under the Biden administration. Those comments were quickly met with an attack from Trump, who criticized Christie’s approval rating as governor.

Despite the biting comments from Trump, Christie already appears to be setting the stage for taking on another political heavyweight. During an appearance on ABC’s “This Week”, Christie argued that President Joe Biden is not “governing as he campaigned” while claiming that Democrats are “deeply underwater” with independent voters. On the topic of Trump, Christie told George Stephanopoulos that the former president won’t be an influence within the Republican Party if he keeps bringing up his 2020 loss.

Christie has a new book, “Republican Rescue: Saving the Party From Truth Deniers, Conspiracy Theorists, and the Dangerous Policies of Joe Biden,” out Wednesday.