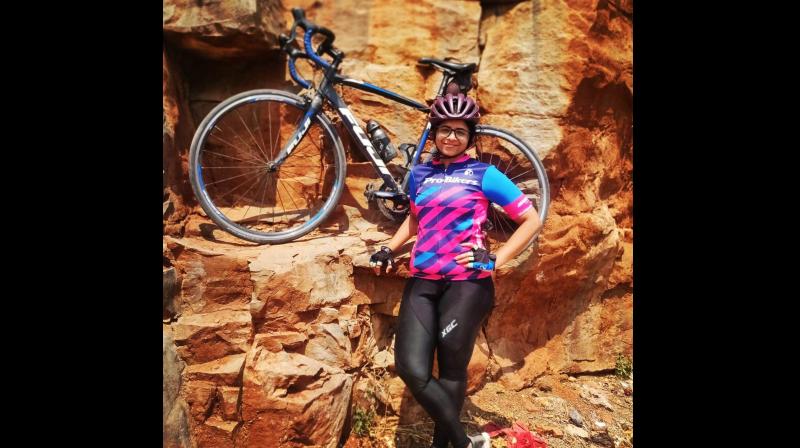 Ever since Dr Niha took to cycling in 2015, she’s been notching up achievements, including a Triple Randonneur (2018). However, the title that she holds most dear is that of the first woman in India to complete five Super Randonneur (SRs). The latest addition to her kitty, which marks her covering around 7,500 km, came at the recently-concluded November 2020-October 2021 season.

“I never expected that I would complete five SRs, so obviously, there’s a great sense of pride!” she enthuses. Randonneuring is a long-distance endurance sport where cyclists attempt brevets (bicycle rides) of 200 km or more. To become a Super Randonneur, one has to complete a set of 200, 300, 400, and 600-km rides in one season (November-October).

Riding such long distances consistently over a year is obviously no walk in the park. The 44-year-old ascribes her success to proper mental preparation. “I realised that if we prepare our mind for tasks, the body will automatically gear up and cope. So it’s all in the mind,” she says.

Interestingly, Niha did not plan to complete five SRs. She says she started these rides to have a clear idea of her endurance levels post the pandemic. She started in the brevet season (November 2020). “I completed my first three SRs in just five months, by April 2021,” she says, and reveals that she embarked on her fourth SR to support a cyclist friend, Ganesh Jasti, in September.

“Also, it was my birthday on September 19, so I wanted to gift myself another SR,” she quips. When there was just a week left for the brevet season to end, Niha wanted to see if she could complete her fifth SR. And much to her own surprise and delight, she did it.

“The entire journey has been a valuable experience. It has made me more humble, patient, and committed towards every activity that I do — whether it is at the office or at home or at the sport,” she shares, adding that after every ride she comes back a better version of herself.

Although Niha has muscle memory, she had to prepare well in advance for the mammoth brevets. She also practiced Vinyasa yoga, which helps in body recovery. “I did a lot of breathing exercises too, and it enhanced my lung capacity. As a result, it improved my stamina, which is key to endurance activities,” she says, adding that this process rids the body of toxins.

“I thought I would be exhausted and my body would take around five days to recover, but surprisingly, I recovered quickly. It feels amazing,” she shares.
Talking of her diet during the rides, the IT professional says for morning rides, she packed breakfast and lunch, which consisted of ghee idly, Pesarattu with butter, and bread omelette, supplying proteins, fats and carbohydrates). For night rides, she took curd rice with her.

“Pesarattu takes a long time to digest and the slow release of energy is helpful during cycling,” she says. “Curd acts as a body coolant and rice gives me the required carbs for endurance.” Drinking water and other fluids at regular intervals kept her hydrated.

As for practical issues, the brevets were undertaken in groups, she says, so security was never a concern. Also, the cycling clubs arranged accommodation during the nights. Riding in a group was motivating too, she says.

The rides were undertaken within the two Telugu-speaking States, but the fact that they happened during the pandemic was a touch scary, she shares.
Niha, who is a mother of two, and works full-time managing IT projects, holds three Masters degrees and a Ph.D. Apart from cycling, her passions are running, gardening, and classical music equally.

“Work from home was a huge boon for me. It saved 2-3 hrs of traveling time daily and I invested that on resting and recovery after cycling,” she reveals.
Niha is also quick to point out that cycling boosted her concentration and creativity. “Earlier, it was difficult to find solutions to some work-related issues, but after I started cycling, solutions started occurring to me. This saved a lot of time at work while increasing my creativity,’ she elaborates.

To Niha, life is all about prioritising, compartmentalising and optimising. She schedules the tasks to be performed and then gets on with them. “The ability to switch on and off depends on an individual. I don’t bring cycling into work and vice-versa,” she asserts.

Niha’s husband is a lawyer, while her daughter is pursuing her MBBS degree and her son is in school. They have been very supportive of her, she says. “I always tell my husband well in advance about my rides, so it’s all about setting the expectations correctly,” she stresses adding that both her children were also inspired by her brevet rides.

But her biggest satisfaction is in seeing more women taking to cycling during the pandemic, she says. “I am glad that women are pushing the limits.”
“If I can do it, anybody can!” says Niha in conclusion.