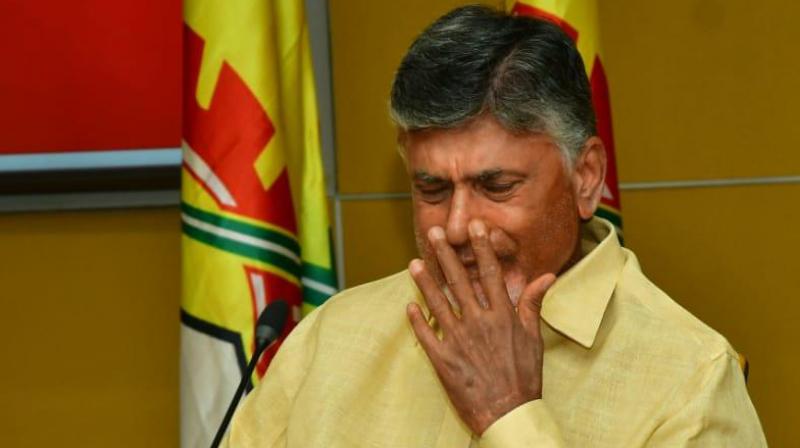 Amaravati: The AP assembly session witnessed stormy scenes with accusations and counter-accusations between YSR Congress and Telugu Desam legislators during the discussion on 'Agriculture Sector and Farmers Welfare' on the second day of the winter session on Friday.

The disturbances started when agriculture minister Kurasala Kannababu said the Heritage company belonging to Chandrababu Naidu was largely benefited by the destruction of the cooperative dairies as this had forced milk farmers to sell milk to only this company. The TD legislators including Chandrababu Naidu rose from their seats and objected to the comments.

Trouble started in the assembly when Naidu asked Speaker Tammineni Sitaram to give him a chance to speak. Naidu said the house must discuss “Babai (YS Vivekananda Reddy) and Goddali (Axe)”, referring to the Viveka murder case. This was opposed by the YSRC.

YSRC MLA Ambati Rambabu started to speak but was repeatedly interrupted by TD members. Rambabu asked Speaker Tammineni Sitaram to give him 30 minutes to speak. TD members said this was not enough and an hour is required. Rambabu said he is ready to take one hour and sought a discussion on Madhava Reddy's murder.

Heated arguments between ruling and opposition members followed. Naidu alleged that the YSRC insulted him through personal accusations against his family including his wife.

Naidu and others stood up in the protest. Speaker Tammineni Sitaram tried to restore order. Angry over the commotion and the alleged objectionable comments against his family by YSRC members, Naidu appeared disturbed and saddened. In a shuddering voice, he termed the assembly as Kaurava Sabha and announced boycott of the House in protest against the 'ugly character assassinations' by the ministers and MLAs of the Jagan -led ruling YSRC.

Naidu strongly objected to the 'personal abuses' that were targeted at his wife even as she kept away from politics for the past four decades. "My wife never interfered with political matters. Her father NTR served as a CM. I myself worked as a long-time CM. Still, even my party leaders don't know her. My family is being targeted in such a mean manner. I am not able to digest this."

Naidu said the assembly speaker did not give him a chance to make a statement in the House before walking out. He said he had 40 years of political career but was now being grossly insulted. “The mike was cut halfway through my speech, while the ruling YSRC members were allowed to hurl all sorts of unparliamentary remarks and abuses on me and my family,” he said, announced that he will re-enter assembly as Chief Minister only, and walked out of the House.

Later, Sitaram announced the removal of objectionable remarks of the members from the assembly records.

Join us on Google News to keep up to date with the latest news
Tags
telugu desam chief n. chandrababu naidu