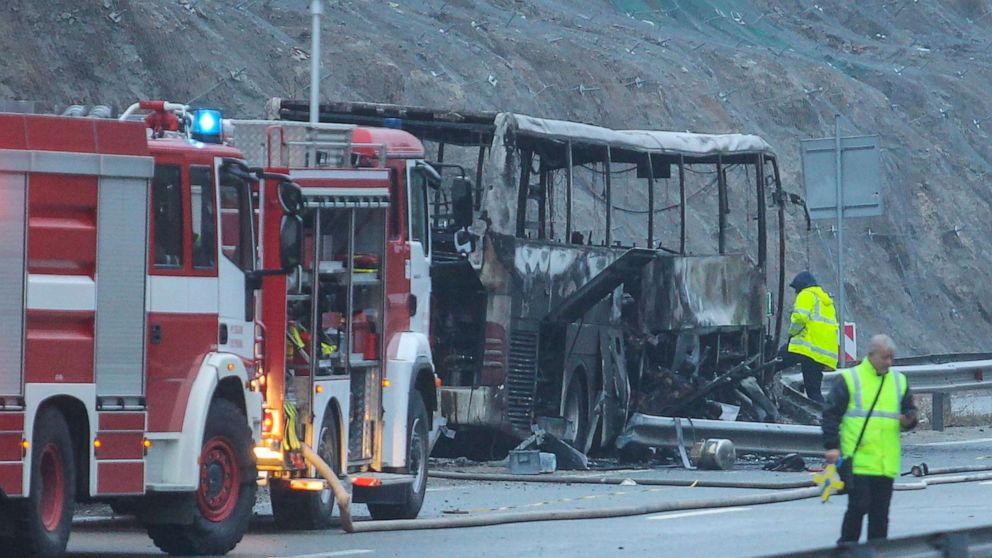 MOSCOW and LONDON — At least 45 people, including a dozen children, were killed after a tourist bus from North Macedonia crashed and caught fire in Bulgaria early Tuesday, officials said.

The accident occurred on the Struma highway near the village of Bosnek in western Bulgaria at around 2 a.m. local time. Emergency teams rushed to the scene, where 45 people were confirmed dead, according to a statement from the Bulgarian Ministry of Interior.

Seven people who sustained injuries from the crash were transported to a hospital for treatment, the ministry said.

Most of those on board were Macedonian, apart from one Belgian national. Twelve children were among the dead, Markovska told ABC News.

The seven people who were hospitalized were admitted to Pirogov Hospital in Sofia.

The patients — four men and three women — suffered from burns and lacerations but were all in stable condition, Dr. Ljubo Topkov of Pirogov Hospital told ABC News.

The cause of the crash was unclear and is under investigation.

Traffic was stopped in both directions on the highway as first responders and investigators worked on scene.

The Macedonian travel agency that owns the bus, Besa Trans, did not respond to ABC News’ request for comment.