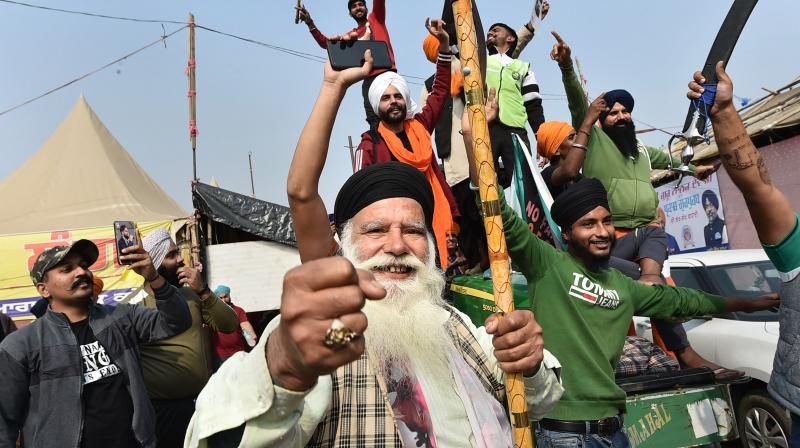 New Delhi: An “election-related strategy” or a decision to “avert any national security threat”? The announcement by Prime Minister Narendra Modi to repeal the three contentious farm laws surprised many within the ruling BJP, whose leaders and cadre had been “painstakingly” highlighting the “merits” of the now soon-to-be repealed legislations.

While the BJP “wholeheartedly welcomed” the decision to repeal the laws, saying it will “further the atmosphere of brotherhood across our nation,” there is a growing apprehension within the party cadre that “protests tactics” could now be used to “undo” some other decisions taken by the Modi government which has, till now, retained power with a “brute majority.”

Protests against the three laws were led by farmers unions who had been sitting on dharna at the national capital's borders since a year while the BJP claimed that many farmers, mostly the small and marginal, have been appreciative of the reforms.

That the PM chose Guru Nanak Jayanti to make this announcement indicated that the Central government was wary of the raging anger in the Sikh-dominated Punjab against the BJP over the contentious laws and its impact on the party’s electoral prospects in poll-bound Uttar Pradesh. It remains to be seen whether or not this decision will have any impact on the electoral performances of ruling Congress in Punjab or the BJP’s former ally SAD or could help the BJP in forging a tie-up with former chief minister Amarinder Singh’s outfit.

While the protests originated from Punjab, where the BJP, till now, does not have a significant political footprint, the party had so far failed to convince most of the farmers of the Jat dominated western UP about the merits of the laws. The BJP has been faring well in western UP since 2014 and the party’s assessment, it was learnt, showed that the protests against the laws could dent its performance in the region, which could further impact the 2024 Lok Sabha polls.

With nearly 140 Assembly seats in western UP, which is also part of the “sugarcane belt,” there was apprehension among the BJP’s poll strategists that “western UP gaya to pura UP gaya (if western UP is lost then UP will be lost).” Also, the Opposition, mainly Akhilesh Yadav-led SP, as per BJP assessment, could gain but mostly in the eastern region and some central parts of the state. During the 2017 Assembly polls in UP, the BJP had gained handsomely in farmers dominated constituencies.

The recent Lakhimpur Khiri incident, allegedly involving Union minister Ajay Mishra’s son, had also “damaged” the BJP’s efforts to assuage farmers and had further angered the farmers of the region.

Though the move by the Modi government to repeal the contentious farm laws is seen by many as an election-related strategy, there were talks in government circles that the Central government had also considered the “national security” aspect. The protests by farmers unions were allegedly being used by elements based in some other countries to “fomenting” tension in the country, in particular Punjab, by linking the issue with the Sikh community. The issue, sources said, was also raised by the former Punjab CM during his recent meetings with Union home minister Amit Shah and National Security Advisor Ajit Doval.