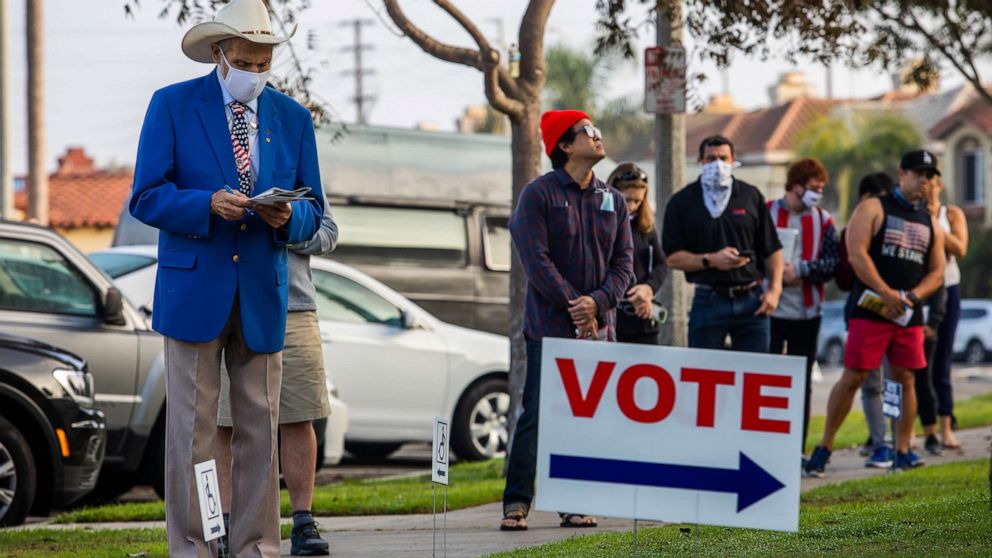 More than a year after Donald Trump’s efforts to undermine election results were rebuffed at the state and national levels, a wave of Republican candidates across battleground states have made election administration and “integrity” central campaign messages – with more than a dozen still voicing doubt about the results of last year’s general election.

An ABC News analysis of 12 high-profile battleground states reveals a trend: Republican candidates for state offices are either questioning the legitimacy of the 2020 election or casting significant doubt on how elections are conducted and votes are counted in their home states. The states examined include Arizona, Nevada, Colorado, Wisconsin, New Hampshire, Pennsylvania, Ohio, Michigan, North Carolina, Texas, Georgia and Florida.

Across these states – five of which Trump won, and seven of which Joe Biden won – at least 15 Republican candidates running for statewide offices – governor, lieutenant governor, secretary of state and attorney general – have refused to acknowledge Biden’s win or made other comments directly challenging the validity of the 2020 election, according to an ABC News review of public statements, interviews and campaign websites.

At least 18 GOP candidates in those politically critical states have alleged broader fraud related to 2020 election results. Across these states, at least 12 are using “election integrity” as a campaign issue, and in some cases, these candidates are also casting doubt on the administration of last year’s election. Furthermore, at least two candidates are attempting to align the concept of “election integrity” with election-related conspiracy theories.

Should they be successful, some of these Republicans could be in a position to either validate or discard election results in their states for the 2024 presidential election, where Trump himself might be a candidate again. Election experts have expressed concern over the recent trend in GOP candidacies and worry that election administration will no longer be so shielded from party politics.

“We have partisan election officials. Election officials in much of the United States run on partisan lines, and there are often philosophical differences between the Democrat and the Republican in terms of how elections should be run,” Lawrence Norden, the executive director of the nonpartisan Brennan Center for Justice’s Election Reform program told ABC News.

“But what we haven’t seen so much of in the past, is somebody explicitly saying, ‘Elect me because I’m on one side. When elections are going to be run, I’m going to be on one side.’ But that message to the public I think is very dangerous: that the job of election administrators is to make sure that one side won,” Norden said.

The stakes are even higher in the context of the way the last general election unfolded. Last year, Republican officials holding statewide office were critical in resisting Trump’s demands that the election results be overturned.

In Georgia, Secretary of State Brad Raffensberger rebuffed former President Trump’s claims that it was “not possible” for him to have lost the state. He also rejected the former president’s attempts to get him to “find” the exact number of votes needed to win the election. Georgia Gov. Brian Kemp similarly backed the state’s election results, despite the former president calling for his resignation as a result. Meanwhile, in Arizona, the GOP governor certified the election and publicly pushed back against Trump’s claims of fraud.

The former president publicly lashed out against these Republicans, which could explain why so many aspiring GOP hopefuls are now bolstering Trump’s false claims about elections to varying degrees on the campaign trail. This trend is particularly salient given Republican losses across states that tended to favor Republicans prior to the 2020 general election.

“The overall mistaken belief that somehow the 2020 election was stolen from Donald Trump is a very useful backdrop for (Republicans) in very instrumental ways and it doesn’t require that they agree with it entirely. It just requires that they tap into the sentiment for approval of what they’re doing,” said James Henson, director of the Texas Politics Project at the University of Texas at Austin.

In the aftermath of the 2020 election, several Republican lawmakers in Texas appeared to take the steering wheel in driving the discourse surrounding the legitimacy of the 2020 general election. Most prominently, the state’s Republican Attorney General Ken Paxton filed a lawsuit challenging election results in the battleground states of Georgia, Michigan, Pennsylvania and Wisconsin — all of which Biden won.

The move appeared to open the door to simmering suspicions in the state’s electorate. Since then, the push for “election integrity” became an accepted policy position by Texas Republicans, and all of Paxton’s primary challengers — including land commissioner George P. Bush, attorney Eva Guzman and state representative Matt Krause — have mentioned their support for pursuing “election integrity” in some way.

“They can rely on the fact that there is a high level of suspicion among Republican voters about the elections and they think they depend on voters to fill in the gaps themselves,” Henson said.

“The exploitation of these attitudes has already been made manifest in Texas with the passage of the election laws,” he added in reference to recently enacted legislation that overhauled the state’s election parameters and tightened voting rules that were already among some of the toughest in the country.

Both Gov. Greg Abbott and Lieutenant Gov. Dan Patrick backed the effort after having made “election integrity” a top legislative priority item despite walkouts from Democrats and protests from voting rights advocates. Abbott’s primary challengers, former state Sen. Don Huffines and former Texas GOP Chair Allen West, also hammered their support for “voter integrity” while indicating they would potentially go farther than the incumbent in that pursuit.

On his campaign website, Huffines alleges that “illegal aliens have cast ballots in Texas elections,” appearing to echo Trump’s false claims of undocumented voters costing him electoral success. Despite there being no evidence of widespread fraud happening across Texas, he also promises to “investigate and aggressively prosecute voter fraud” if elected.

West was the state party chair when the Texas GOP released a statement saying it took “massive election irregularities for President Trump to be removed from office.” He now highlights “election integrity” as part of his campaign platform, noting that, if elected, he will support “a full, comprehensive forensic audit of ballots, voting system software platforms, voting records, and records kept by local election administrators.”

West’s focus on the concept of so-called election “audits” builds off a situation that played out in Arizona following the certification of 2020 election, in which state Republicans backed a months-long, forensic re-examination of voting systems. Although the effort concluded that Biden actually won by more votes than originally tabulated, many prominent Arizona candidates now running for statewide office prioritized denying the results of the 2020 election while leaning into the “audit” as a part of their campaigns.

Retired TV news anchor Kari Lake, now a frontrunner in the GOP gubernatorial primary, has said over the course of her campaign that if she were governor last November, she would not have certified the election. State Rep. Mark Finchem, who was at the insurrection on Jan. 6 and defended the actions of those who stormed the Capitol, is now pursuing a run for the state’s chief elections official and would have oversight over the state’s elections.

Chuck Coughlin, a veteran Republican strategist who is now an independent, said his firm’s data shows candidates going big on the “Big Lie” will have a hard time in a statewide general election.

“All of our data shows out here that a election conspiracy theorist that believes that the election was stolen — if that is the core part of the election dialogue — will lose, because a majority of the electorate doesn’t believe in that,” Coughlin said.

The heightened divisions among Republicans are already emerging in Georgia, a state that became a core focus of 2020 politics.

Rep. Jody Hice, who voted against certifying the election in Arizona and Pennsylvania in Congress, is now running for secretary of state and is facing off against incumbent Secretary Raffensperger. Raffensperger’s strength as an incumbent will be tested given his past adherence to the law despite pressures from the former president.

A similar dynamic is playing out in the governor’s race, where Kandiss Taylor is running to unseat incumbent Gov. Brian Kemp, who repeatedly did not engage with the “Big Lie.” She’s claimed that Arizona helped Georgia complete voter fraud last November.

Coughlin says the context of a crowded Republican primary can lead some candidates to the fringes of the party in an attempt to differentiate themselves to voters. The stakes of that possibility are heightened in Georgia for Republican incumbents who may be seen as out of sync with the views of the party base.

“Every campaign that I’ve run you don’t want to have a Republican primary, because it makes you do the things you do,” he said.

A crowded field is vying for the top executive position in Michigan, where Biden won by 2.8% of the vote, and where Democrats have fought to make inroads with the electorate after Trump in 2016 took the state as a Republican for the first time since 1988.

“Michigan had a very close presidential election in 2020, and Donald Trump repeatedly questioned the outcome, including having Michigan state legislative leaders to the White House to try to pressure them to do something about it, and so that’s certainly the origin of this trend that we’re seeing of more Republican officials and candidates deciding that they need to get on board with that message,” said Matt Grossman, who serves as director of the Institute for Public Policy and Social Research at Michigan State University.

Grossman also notes the state’s revisions of voting rules ahead of the 2020 election — including parameters regarding absentee and mail voting — could have heightened existing partisan tensions.

In hopes of ousting incumbent Democrat Gov. Gretchen Whitmer, almost half of the Republican gubernatorial field have expressed beliefs that rampant fraud was a factor in landing Biden the presidency. As reported by MLive over the summer, Articia Bomer, Ryan Kelley, Evan Space, Bob Scott and Ralph Rebandt all lean on these allegations of unsubstantiated voter fraud when asked about the 2020 election outcome.

Although it will be up to the state’s GOP to nominate candidates for attorney general and secretary of state at next year’s party convention, two candidates for these positions already earned the endorsement of Trump.

Taken together, these examples of high-profile, 2022 statewide races highlight divisions over election administration that will raise the stakes for the next general election and will set the tone for how election officials administer voting procedures.

“Election officials faced massive, unprecedented pressure to lie about the election, and they didn’t. And I think that that is part of the reason now why there is such a focus, there’s such a backlash against them, was because they refused to lie. They insisted on telling the truth about the election results. If they had bent to that pressure, the story of the post-2020 election might have looked very different,” Norden said.