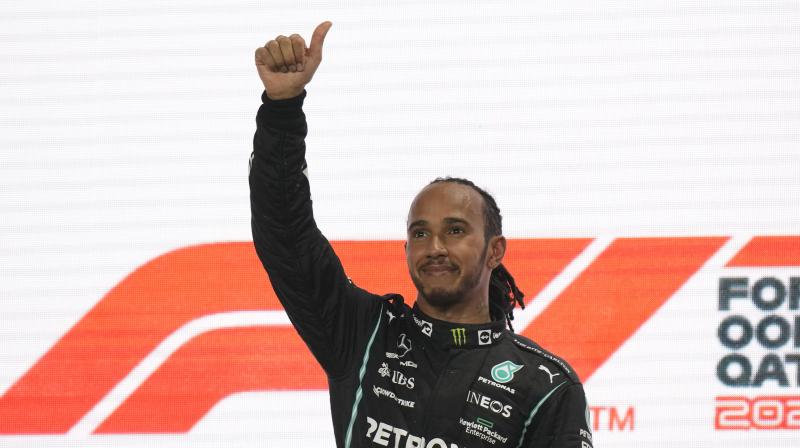 The Mercedes seven-time champion held off his arch Dutch rival's Red Bull by a country mile under the Losail circuit's lights to leave the battle for the F1 drivers' crown delicately poised with only two races remaining.

Fernando Alonso took third for Alpine, the former two-time world champion's first podium since 2014, the grizzled 40-year-old getting a huge cheer from the crowd.

One week on from arguably his toughest and greatest win in Brazil, Hamilton enjoyed one of his easiest.

And after an unprecedented eighth world title appeared to be slipping from his grasp after Verstappen's wins in the USA and Mexico, it is the 36-year-old Briton rather than the 12-year-younger pretender who has the momentum.

"We needed those points today. I can't wait to watch the race replay to find out what happened behind me," he said after his 102nd career win.

"I'm really grateful for these points, it's been a hell of a year. Back-to-back wins here, feel good, I feel fit, fitter than I've ever felt. Bring on the next two!"

Verstappen, who was demoted from second to seventh on the grid for a yellow flag infringement in qualifying on Saturday, took second, and picked up a point for the fastest lap.

"Our starting position was compromised, but luckily we had a really good start," he said.

Hamilton's faster engine, fitted last weekend in Sao Paulo, will likely give Red Bull a tough time again at the ultra quick new circuit in Saudi Arabia in a fortnight's time ahead of the season-closing race in Abu Dhabi in mid-December.

The 20th race of the season was being held one year to the day to the World Cup and the trophy was on display, as were some of football's finest — David Beckham, Andrea Pirlo and John Terry getting a touchline view of how fast Hamilton takes corners.

Sporting the rainbow helmet he has worn in practice and qualifying to raise awareness for human rights and equality, Hamilton got off to a dream start, quickly drawing away from the pack as Verstappen jumped up from seventh to fourth.

The charging Verstappen knocked off Pierre Gasly's Alpha Tauri to move into third by lap four, with Alonso falling shortly after to leave only Hamilton in his cross hairs.

With the new engine fitted before Brazil firing on all cylinders, Hamilton was leaving his Red Bull pursuer for desert dust.

Verstappen, trailing by nine seconds, was the first to pit on lap 18, resuming in second.

Mercedes covered that move, boxing Hamilton on the very next lap with the Briton resuming with a lead of around eight seconds.

Like a game of shadow boxing, Mercedes carried out the same tactics the next time Verstappen pitted, leaving Hamilton to coast to victory and Red Bull puzzling over what they can do to keep their championship hopes alive.