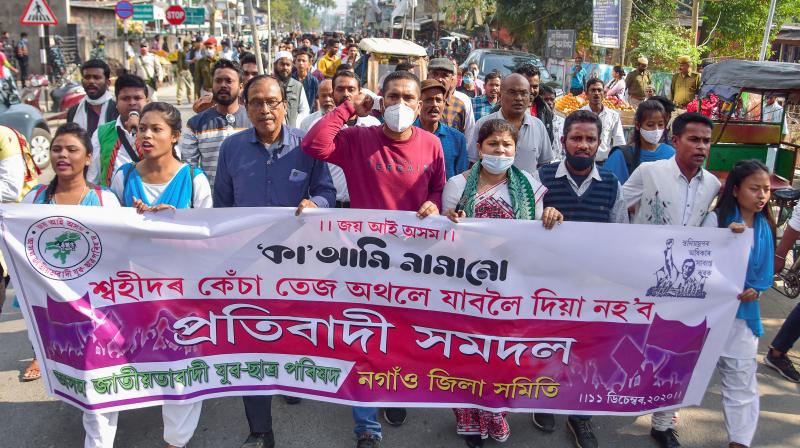 Guwahati: The decision of the Central government to repeal the three farm laws after year-long protests may revive the anti-Citizenship Amendment Act (CAA) movement once again in Assam with the powerful All Assam Students Union (Aasu) on Saturday asserting that like the three farms law, the Central government will have to repeal the “anti-people CAA”.

The Aasu reiterated that its movement against the “black law” which has been imposed forcefully would continue.

Pointing out that repeal of the three farm laws was a victory of farmers and their democratic protest, the students union which was in the forefront of the anti-CAA movement in the state, said that the entire episode of imposing and repealing the farm laws has once again exposed the “arrogant and fascist” nature of the BJP government. “With the Prime Minister’s announcement on three farm laws, it is clear that the Central government was compelled to bow its head before the resolute farmers and their continuous protests. The anti-CAA movement in Assam will also continue till the Act is repealed,” Aasu adviser Samujjal Bhattacharyya told reporters.

“The CAA was passed in 2019. Several north-eastern states were excluded from the purview of the act. In Assam also, Bodoland Territorial Region (BTR) and other 6th schedule areas don’t fall under the ambit of CAA. However if the Act is forced on the people of other districts of the state, it is obviously not only extreme injustice but would also affect the other north-eastern states adversely,” said Aasu president Dipanka Kumar Nath.

Aasu general secretary Sankor Jyoti Baruah said, “The CAA is not just anti-people, it is also unconstitutional and communal. It is a threat to indigenous culture and ethnicity. There is not a single valid reason for the government to remain adamant on enforcing this law.”

Meanwhile, the Coordination Committee Against Citizenship Amendment Act, Assam, has also reiterated that it would intensify stir against CAA. The committee has already announced to hold a massive protest against CAA on December 12 which coincides with the anniversary of the anti-CAA movement in the state.

“Just as this government has shed its arrogance in the case of the farm laws, we urge them to take a similar approach towards the anti-CAA movement and repeal the undemocratic act at the earliest,” said chief coordinator of the committee Deben Tamuli.

The new regional political party Assam Jatiya Parishad (AJP) said that victory of farmers would give a much needed impetus to the anti-CAA movement in the state.