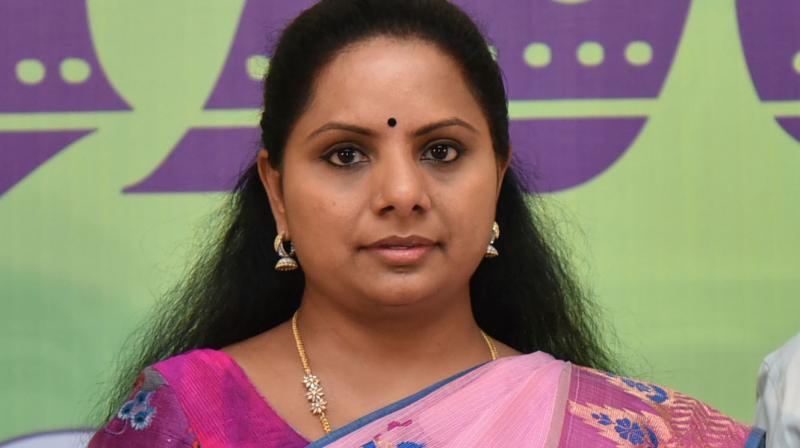 Hyderabad: Ending all political speculation that Chief Minister and TRS president K. Chandrashekar Rao may send his daughter, the sitting MLC Kalvakuntla Kavitha to Rajya Sabha, Mr Rao on Monday named her in a list of six TRS candidates for the state legislative council under the local bodies category.

Besides Ms Kavitha, the ruling Telangana Rashtra Samiti (TRS) has finalised names of 11 other candidates under the local authorities’ category for MLC posts.

Welcoming Kavitha’s nomination as MLC, two TRS Members of Parliament – B. B. Patil and K. R. Suresh Reddy said that her nomination was a result of her "excellent work" as MLC and her "commitment towards strengthening the party".

Yadava Reddy filed his papers in Medak district and Tata Madhu in Khammam district. whereas Patnam Mahender Reddy and Shambirpur Raju filed their papers in Rangareddy district. Pochampally Srinivas Reddy filed papers for MLC election in Warangal district. Remaining candidates will file their papers tomorrow, which is the last day for filing papers.

Earlier, it was expected that Singer Saichand from Mahbubnagar and Akula Lalitha from Nizamabad would be nominated to the MLCs list, but the party top brass made last minute changes taking into consideration the mood of its cadres.

"The TRS party provided an opportunity to both senior leaders as well as newcomers in these MLC elections," said a party leader. "With these election wins, the TRS will further strengthen across the state to work under the leadership of CM K. Chandrashekar Rao and fulfil aspirations of the people."

Among the newly elected MLCs, three are Reddys, and one is Velama, one BC and one SC. Interestingly, Padi Koushik Reddy joined just before the high voltage Huzurabad byelection and got elected as MLC. Former Siddipet collector P. Venkatram Reddy who resigned from IAS was made MLC.