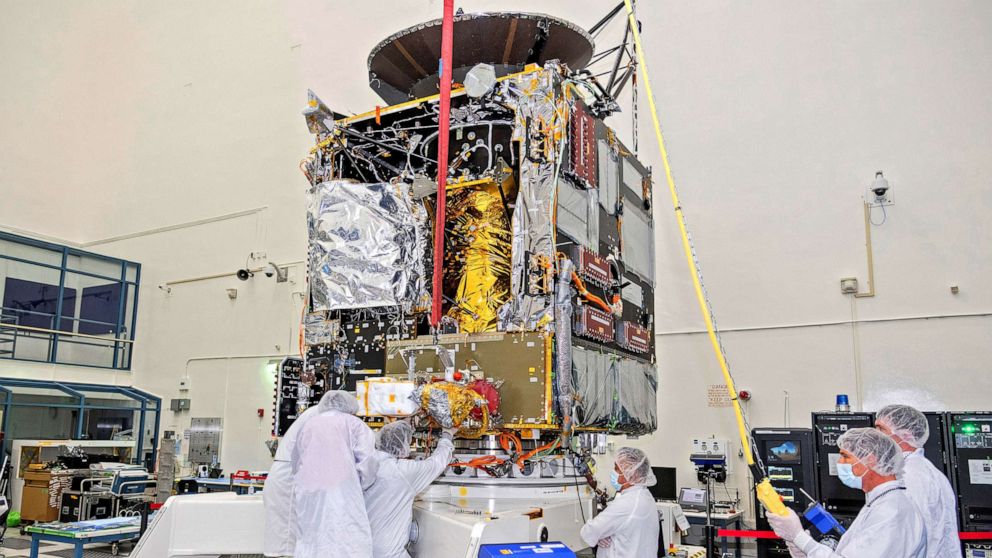 Inside a giant, white clean room on the campus of NASA’s Jet Propulsion Laboratory in Pasadena, California, engineers and scientists have been putting the finishing touches on a spacecraft that, this time next year if all goes according to plan, will be on its way to another world.

The other world is one made of metal and may give the first glimpse of how a planet with a metal core, like the Earth, was formed.

The boxy looking spacecraft, which is about the size of a small car, will be the first in the history of space exploration to explore an object in space that is not made of rock or ice. The object is an asteroid named Psyche. It will take years to reach Psyche and it will require traveling roughly 1.5 billion miles into deep space with an assist from Mars. Psyche, also the name of the spacecraft, will slingshot around Mars using the red planet’s gravity to give it momentum to make the trip to Psyche, which sits in the main asteroid belt orbiting between Mars and Jupiter.

The asteroid was discovered in the 1800s but humans know little about the metal object. Scientists don’t really even know what it looks like. But they’re about to find out.

Lindy Elkins-Tanton is a planetary scientist, a professor, and the vice president of the Arizona State University Interplanetary Initiative. She is also the principal investigator of the Psyche mission. It is her project that she has spent a decade proposing and planning. Now final mission plans are underway while the spacecraft is being built by scientists at JPL.

“There’s this one asteroid of just a handful that appear to be made mostly of metal,” Elkins-Tanton, describing her team’s mission, told ABC News. “But there’s only one that big and mostly round and that’s Psyche.”

Being mostly round, or actually more potato shaped, is important because Psyche will orbit the asteroid as a satellite like those orbiting Earth. It will orbit until the end of its life and then will likely get closer and closer collecting data before it crashes into the giant metal object. Although exactly how the spacecraft will eventually die hasn’t been decided by NASA.

Scientists believe Psyche might be the exposed core of an early planet. It could answer how planets are born and exactly what metals are in Earth’s core.

The Psyche mission is led by Arizona State University. Elkins-Tanton’s team had to compete and convince NASA that its mission was one the space agency should invest time and resources in to make a reality. She was shocked in early 2017 while vacationing in the woods of Massachusetts with little cell phone reception when a call came that NASA had chosen her project against all of its competitors to be built and fly into deep space.

“I had been a field geologist, an experimentalist, really just a pure academic scientist, and then a theorist and I was trying to understand how rocky planets like the Earth got built. Why do we have this metal core? Why do we have this rocky exterior? Why is our planet habitable? What happened in the earliest part of the solar system that built these planets that amazingly sprang to life,” Elkins-Tanton said. “We got this idea that there was a particular moment in formation, super early long before the Earth existed where the very first small little bodies like miniature planets called planetesimals actually formed a metal core.”

While her team made up of ASU researchers and students run the mission, JPL is in charge of building the spacecraft, engineering, and mission operations. For the first time in a deep space mission, the team recruited a commercial satellite company to help build the main structure of Psyche. They decided rather than building the spacecraft from scratch that they would turn to experts in the field of commercial satellites. It could save time and money rather than starting with nothing. Maxar Technologies in Northern California, which is a major builder of satellites that orbit Earth, was hired to build the chassis of Psyche.

“So they know how to do Earth orbiters. What we needed to do though is figure out how we are going to take that big bus structure and fly it to deep space,” JPL Project Manager Henry Stone, who is in charge of getting Psyche built and ready to fly in time for launch next year, told ABC News.

When Maxar delivered the chassis to JPL last March, it had most of the bones needed including the propulsion system, electrical and navigation already onboard. But Maxar’s satellites have not gone into deep space.

Stone’s teams are working around the clock to make sure they have thought of everything that could go wrong once Psyche launches.

“How do I lay out a plan and a schedule that accounts for all the work that needs to be done to a hard launch date? This is a planetary launch. We don’t get to move it around. It has to go. The planets are aligned and waiting for us,” Stone said.

Stone has organized a team of people in the hundreds to make sure the craft is ready for launch next August.

The project includes student collaboration efforts in which undergrad college students around the country are taking part in the mission in different ways. Some are creating art or music inspired by Psyche.

Soon Psyche will undergo intense testing on the JPL campus to simulate the extreme heat, cold and vacuum of space to make sure it stays intact and no pieces fly off or stop working.

Once the greenlight is given, Psyche will be transported to Florida and prepared for launch. After launch and the lengthy journey to the asteroid, the spacecraft will orbit the asteroid for 21 months using a magnetometer and other gadgets like a neutron spectrometer to analyze the metals inside the object.

Psyche will also test a new form of space communication utilizing light to send back data. Deep Space Optical Communications will attempt to use lasers millions of miles from Earth to beam back data that could have so much bandwidth that it could even stream video, if it works.

“If we can show that all of the science data lines up to say that is the core of an early planet that got all the rocks and everything blown off it… That would be huge,” said Stone. “But if it’s not that we will discover that it’s something so unbelievably new it will be some primordial metal mass or whatever it is, you can argue that almost a greater thing to have found. Either way it’s a win for NASA and the project and everybody.”

In fact Elkins-Tanton’s secret wish is that when the spacecraft arrives her team finds out it’s not what they expected and it’s actually a material and an object never before seen. Her team should know in 2026.