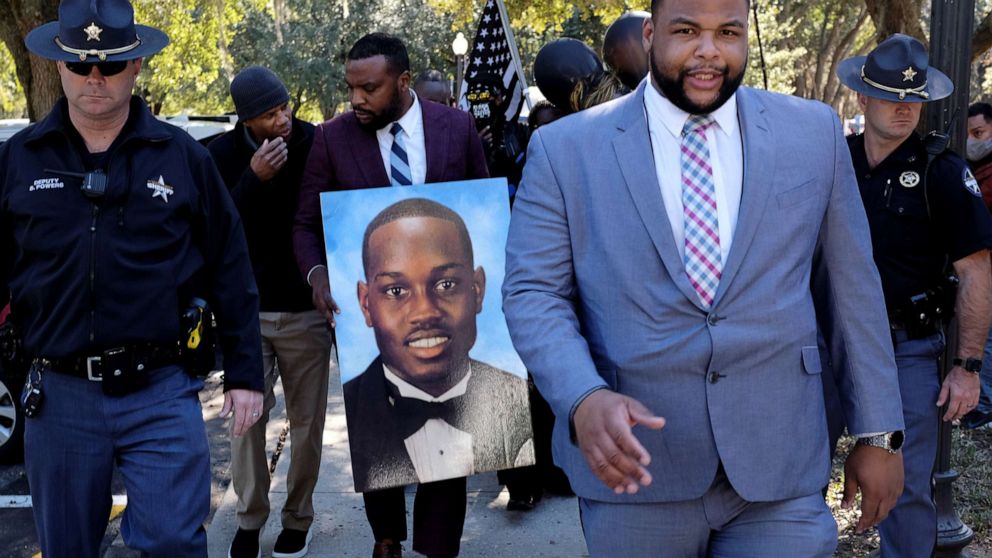 A Georgia jury is now deliberating the fates of three white men charged in the fatal shooting of Ahmaud Arbery, a 25-year-old Black jogger.

The prosecution and defense gave the nearly all-white jury two vastly different tales of Arbery. The prosecution painted him as a brother, an uncle and a victim, while the defense portrayed him as a prospective criminal.

Travis McMichael — who shot Arbery on Feb. 23, 2020 — his father Gregory and their neighbor William Bryan have pleaded not guilty to a nine-count state indictment that includes malice murder, multiple charges of felony murder, false imprisonment, aggravated assault with a 12-gauge shotgun and aggravated assault with their pickup trucks.

Travis McMichael claims he shot Arbery in self-defense. The three say they believed he may have committed a crime in the neighborhood and pursued him after he jogged past Gregory McMichael’s house.

In closing statements, Laura Hogue, the attorney for Travis McMichael, slammed Arbery’s character, claiming that “a beautiful teenager with a broad smile and a crooked baseball cap can go astray.”

“He can deteriorate and lose his way, and years later he can end up creeping into a home that is not his own and running away instead of facing the consequences, acting erratically when approached and making terrible, unexpected, illogical choices,” she said, describing Arbery and the case.

Travis McMichael had testified that he and his father believed Arbery had committed a burglary at a home under construction in their neighborhood, though prosecutor Linda Dunikoski said neither Travis nor Gregory called the police or had seen Arbery commit a crime.

The attacks against Arbery’s character continued from the defense.

“Turning Ahmaud Arbery into a victim after the choices that he made does not reflect the reality of what brought Ahmaud Arbery to Satilla Shores in his khaki shorts with no socks to cover his long, dirty toenails,” Hogue said.

Defense attorney Jason Sheffield also recalled Travis McMichael’s testimony, which claimed that Arbery was angry and clenching his teeth when he was approached.

The prosecution argued that there is no proof Arbery had committed or planned to commit a crime.

Dunikoski denounced the portrayal of him as a criminal, saying, “All three of these defendants made assumptions — made assumptions about what was going on that day, and they made their decision to attack Ahmaud Arbery in their driveways because he was a Black man running down the street.”

Dunikoski urged jurors to remember that Arbery was unarmed with nothing in his pockets when he was being tailed by the three men on trial.

“They’re going to try and convince you that Ahmaud Arbery was the attacker, that he was somehow threatening to them — three on one, two pickup trucks, two guns,” said Dunikoski. “They want you to believe that he is the danger to them.”

Dunikoski opened the trial by humanizing Arbery, highlighting his personal relationships as a brother and uncle, and “an avid runner.”

“The evidence that he was an avid runner is you’re going to be able to see his shoes, his Nike shoes, where he basically almost had absolutely no tread left on them whatsoever,” she said, highlighting the commonplace nature of Arbery’s run through the neighborhood.

Outside of the courtroom, Arbery’s mother, Wanda Cooper-Jones, urged people to remember him for more than his tragic death.

Travis McMichael, Gregory McMichael and Bryan each face maximum sentences of life in prison if convicted on all the charges.