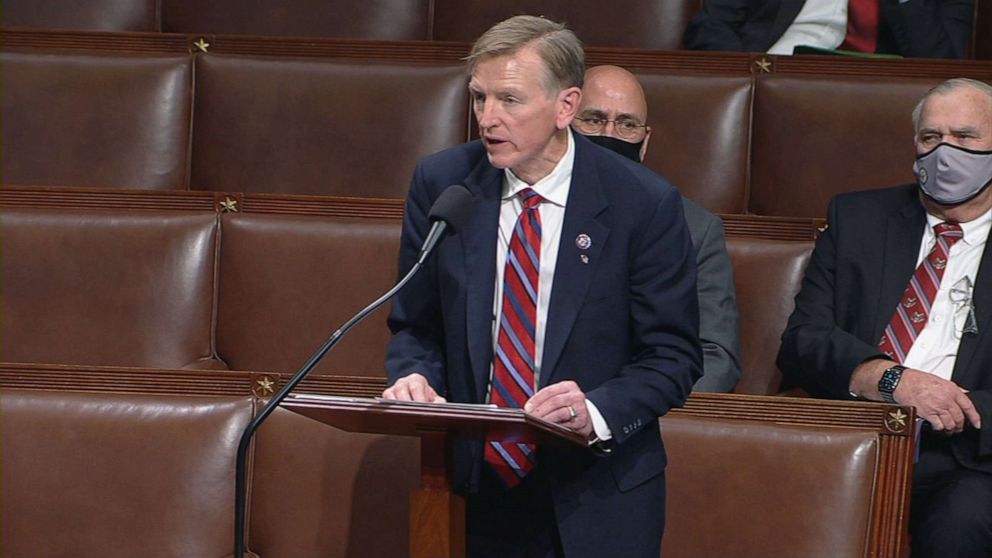 The House voted for a resolution on Wednesday that both censures Republican Rep. Paul Gosar and removes him from his committee assignments after the Arizona congressman tweeted an edited Japanese anime cartoon last week showing him stabbing President Joe Biden and killing Rep. Alexandria Ocasio-Cortez, D-N.Y., before he deleted it.

Gosar, flanked by about a dozen colleagues in the hard-right House Freedom Caucus, stood in the well of the House as the censure resolution was read aloud.

Democrats spent hours on the House floor Wednesday excoriating GOP leaders for not publicly condemning the Twitter post from Gosar, an ardent Trump supporter who has espoused conspiracy theories and associated with white nationalist groups in the past.

House Speaker Nancy Pelosi was the first to kick off debate on Gosar’s actions which, she said, “demand a response.”

“We cannot have members joking about murdering each other or threatening the president of the United States. This is both an indictment of our elected officials and an insult to the institution of the House of Representatives. It’s not just about us as members of Congress. It is a danger that it represents to everyone in the country,” Pelosi said.

“When a member uses his or her national platform to encourage violence, tragically, people listen to those words,” Pelosi added, before condemning House GOP leadership for, in her view, not holding their colleague accountable. “It is sad that this entire House must take this step because of the refusal of the leadership of the other party.”

She said it took nine days for Republican Leader Kevin McCarthy to speak out publicly about the incident and that when he did, he “merely” said there was no harm intended.

Sources confirmed to ABC News on Tuesday that Gosar apologized for the tweet behind closed doors during a GOP conference meeting. McCarthy said he had also spoken privately with Gosar about the tweet, but he did not appear to take further action against him.

McCarthy opposed the Democratic move to censure Gosar and remove him from his committee assignments, but instead of defending Gosar’s actions ahead of the vote, he blasted Democrats for what he deemed was an overreach of power.

“The speaker is burning down the House on her way out the door,” McCarthy said. “Let me be clear. I do not condone violence, and representative Gosar has echoed that sentiment.”

Gosar, speaking publicly about the video for the first time, which he said in an earlier statement was an attempt by his staff to reach a younger audience, said he doesn’t condone violence but appeared to accept his fate as Democrats barrel towards the vote.

“I do not espouse violence or harm towards any member of Congress or Mr. Biden,” Gosar said, notably not calling Biden “president.”

“If I must join Alexander Hamilton, the first person attempted to be censored by this House, so be it. It is done,” he added.

Ocasio-Cortez urged her colleagues to vote “yes” and said the depictions are part of a larger trend of misogyny and racism in America.

“Can you find anyone in the chamber that finds this behavior acceptable?” she asked her colleagues. “Would you allow that in your home? Do you think this should happen on a school board…a church?”

House Majority Leader Steny Hoyer said to reporters during a press call on Tuesday, “I have never in 40 years seen such a vile, hateful, outrageous, dangerous, and inciting to violence against a colleague, ever.”

“The fact that they would not take some action themselves or make some comments themselves, which I have not seen, is a testament that perhaps they are rationalizing, as they rationalize other items of criminal behavior, this particular action,” Hoyer said of Republicans.

The resolution boots Gosar from the Oversight and Reform Committee, which he serves on alongside Ocasio-Cortez. It also removes him from the Committee on Natural Resources.

Late Monday night, Pelosi told reporters it was up to McCarthy to rein in and reprimand his conference members — but Democrats, outraged over Gosar’s behavior, insisted on a floor vote. On Tuesday, she deemed the resolution as an appropriate measure.

“Why go after [Gosar]? Because he made threats, suggestions about harming a member of Congress…We cannot have members joking about murdering each other as well as threatening the president of the United States,” Pelosi said.

Once a vote was imminent, Gosar on Tuesday seemed defiant, tweeting out a meme that says, “God gives his hardest battles to his strongest soldiers.”

Twenty-three members of Congress have formerly been censured for misconduct, according to a 2016 Congressional Research Service Report.

Former Rep. Charlie Rangel, D-N.Y., was the last member of Congress to be censured — in December 2010 — accused of nearly a dozen ethics violations.