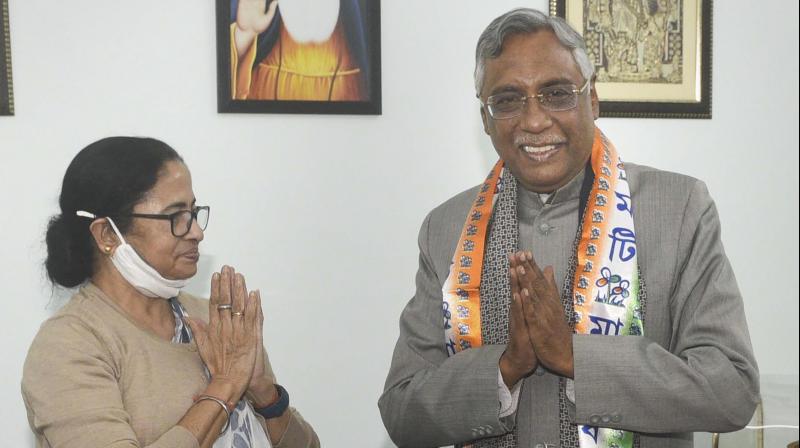 “I’ll work under the leadership of Mamata Banerjee and I’ll start working on the field. The BJP’s politics is divisive and we will fight it. Today, a personality like her is needed in the country who can show it the right direction,” Mr Azad said after joining.

Mr Varma, a former advisor to Bihar chief minister Nitish Kumar, along with Prashant Kishor, was expelled from the ruling JD(U) in 2020 over disagreements with the Bihar CM about the controversial citizenship law. He was an MP until July 2016. He was also the national general secretary and spokesperson of the party.

“Keeping the political circumstances in mind, it is imperative to strengthen the Opposition… Mamata Di will be a deciding factor in 2024 and she will play a national role,” he told reporters.

Shortly after his sacking, Mr Varma had tweeted, “Thank you Nitish Kumar ji for freeing me from my increasingly untenable position of defending you and your policies. I wish you well in your ambition of being CM of Bihar at any cost.”

Making the announcement on Twitter, Trinamool Congress stated, “We are elated to welcome Shri @PavanK_Varma into our Trinamool Congress family. His rich political experience will help us serve the people of India and take this nation forward to even better days!”

In another setback to the Congress, the party’s former Haryana president Ashok Tanwar also joined the TMC.

After joining Mr Azad said, “The country needs a person who can fight on the ground… (and give it) a new direction. She has proved (she can do this), I am a sportsperson… no caste or religion… I will fight for what is good for the country and keep it together against those who are trying to break it."

Mr Azad joined the Congress in February 2019 just ahead of the general elections. The Congress fielded him from the Darbhanga Lok Sabha constituency which the party had won thrice, but he lost the election to the BJP candidate.

Mr Tanwar was considered close to Congress leader Rahul Gandhi was an MP from Sirsa during 2009-2014. He quit the Congress days before the Haryana Assembly elections in October 2019 after he was replaced by Kumari Selja and denied a ticket for the Assembly elections. In February this year he launched his own party.

After joining TMC, Mr Tanwar said, “Entire country is feeling tortured by the Bharatiya Janata Party. I have been associated with student politics. Circumstances have now become such that the only leadership capable of leading this country is Mamata di,”

Ms Banerjee welcomed all the leaders and said, “The TMC family is complete. Ashok Tanwar is not alone. I have told him to begin work and he will visit both Kolkata and Goa. He will go to Haryana and travel the state. We have to all work together.”

Mr Kirti Azad is the third prominent leader to leave the Congress and join the TMC. The earlier two have been Ms Sushmita Dev and Luzinho Faleiro.